The ‘great opportunity’ of urban transport in Athens and Thessaloniki

The public transport of Athens and Thessaloniki was one of the big “losers” of the two years 2020-21, as they lost a significant part of the passenger traffic.

From 2022, they are gradually regaining the trust of the passenger public and are now faced with a great opportunity: The recovery of a larger share in urban transport, due to the significant rise in fuel costs, which may prevent the expanded use of the private car.

To achieve this goal, key parameters are improved accessibility, longer network (more stops and stations), shorter distances, with the launch of additional vehicles and trains and the elimination of pandemic risks.

Athens’ public transport, as mentioned above, was in the spotlight during the pandemic. According to transport experts, the pandemic accelerated the adoption of important decisions, as partnerships with KTEL, tenders for bus rental and recruitment announcements were launched.

Also, the supply of 770 modern buses in Athens and Thessaloniki was announced, many of them electric, but also the supply of new trains in the metro.

In fact, after the reduction of the VAT rate to 13% in transport and in the context of the broader measures to support citizens, businesses and tourism, the prices of tickets and unlimited travel tickets in Athens and Thessaloniki were adjusted from 1 June 2020 (1 , 20 euros in Athens the single ticket and 0.90 euros in Thessaloniki the individual).

Now, with the rise in fuel prices, the single ticket and the monthly card in OASA and OASTH, with the highly competitive prices that accompany, seem “economic breath” for those who travel frequently to the two largest cities in Greece.

In terms of infrastructure, in July 2020, the three new stations in the extension of the metro in Piraeus, “Agia Varvara”, “Korydallos” and “Nikaia” were inaugurated and the remaining 3 stations (“Maniatika” are expected by September “,” Piraeus “and” Municipal Theater “).

At the same time, the tram – which was supplied with new trains – returned to Syntagma and SEF and inaugurated the expansion in Piraeus, while the contractor for the first section of line 4 was announced (“Veikos – Goudi Grove”).

Also, the contractor was announced for the reconstruction of the trains of line 1 and more trains were launched in the metro (in lines 2 and 3, the trains are now 39 compared to 32 in the past).

Regarding road transport, every morning at rush hour, there are about 1,300-1,350 buses and trolleys on the road, an increase of 40% from the data of the previous 3 years, with a simultaneous increase of 50% of the routes, to 18,000 per day, something that leads to a reduction in time distances.

According to transport experts, “of course there is a greater need to meet the requirements of a city like Athens”, but the improvement actions are obvious.

According to estimates by HIT-CERTH, passenger traffic in Athens has recovered by 50% on buses and by 70% -80% on fixed-track vehicles.

At this point, a crucial parameter for the increase of passenger traffic is not only the strengthening and reliability of the MMM routes, but mainly the elimination of the risks from the pandemic.

In terms of economic effect, the large reduction in passengers, and therefore revenue, led the State to additional subsidies and in fact, recently passed an amendment to exceed the OASA state subsidy by more than 40%, as the energy crisis significantly increased operating costs. In this way, the ticket price is maintained. 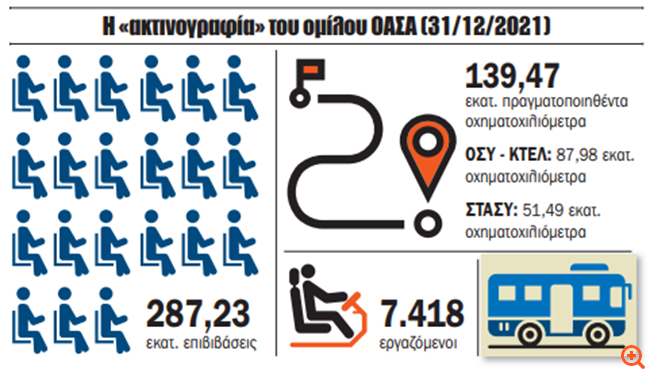 With the “look” at the future of travel

In recent years, the emphasis on public transport in Athens has been given to the digitization of the OASA Group, through the implementation of PPPs for telematics and electronic ticketing.

According to its executives, the OASA is launching actions, both in the short and long term, to improve passenger service.

In addition to installing more digital cameras for policing bus lanes and telematics stops, as well as using the credit card as an electronic ticket that are planned for the near future, the OASA is preparing the “movements of the future”.

The Organization, in collaboration with the Municipality of Chaidari and the University of Thessaly, completed the pilot program for the implementation of the intelligent system “SmartBUS” for the operation of an “On-Demand” bus line, with the possibility of booking seats, managing the capacity of the vehicle and export of optimal itineraries based on passenger bookings.

In the two months of pilot operation of the program between OASA-University of Thessaly, 400 accounts of active users were created, 2,500 reservations were made and 730 routes were executed.

Also, OASA cooperates with more than 37 municipalities of Attica, in order to prepare “Sustainable Urban Mobility Plans” (SVAK). The action continues in 2022 and in cooperation with EESYP, measures and proposals are being examined that will promote sustainable modes of transport (pedestrian transport, bicycle) and their combination with public transport, discouraging the use of private means.