The “junk” bonds show that the American economy is avoiding recession

The move in the US corporate junk bond market suggests that the country’s economy may be weakening, but it will not go into recession.

Fed officials are pledging to continue aggressive moves against inflation even as the risk of a recession rises, at a time when many analysts believe markets are not paying enough attention to the effects of an economic slowdown, but for now investors ” they vote” with their dollars, Bloomberg points out.

According to the agency’s database, high-yield bonds rallied 5.9 percent in July, marking their biggest monthly rally in a decade, while also continuing their gains in August.

The risk premium on bonds shows that they are not at levels usually associated with a recession. Stocks, junk bonds and other risk-taking markets moved higher in the second half of July as investors began to hope that signs of slowing growth would translate into an easing of the Fed’s stance on its next moves.

Of course, the signs of slowing down come from many sides. Walmart said last week that its customers are shunning expensive products and focusing on groceries. AT&T said some customers are late paying their bills, and home sales fell in June by the most since April 2020, data showed last week.

In the markets, yields on longer-dated government bonds often cross lower than shorter-dated ones, a condition known as an inversion of the curve that, when persistent, usually signals an impending recession.

However, it is unclear whether these indications will translate into a severe recession. 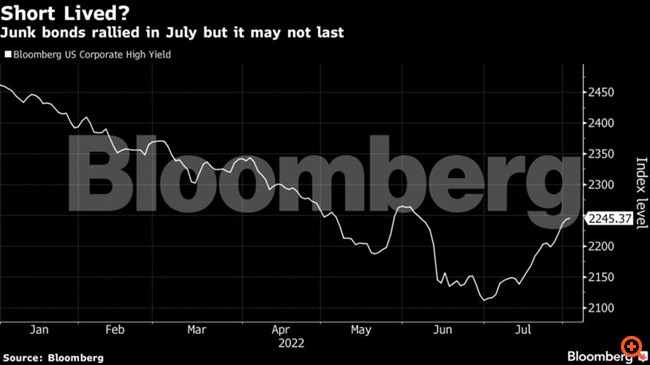 “The high-yield market is certainly pricing in some level of stress, but it’s not pricing in anywhere near recessionary levels,” Citigroup strategist Michael Anderson told Bloomberg.

According to an analysis by Lehmann Livian Fridson Advisors chief investment officer Martin Fridson, between December 1996 and December 2021 there were 28 months when the US economy was in recession.

During these months, the average junk bond spread was approx 835 basis points the 8.35% as shown by the ICE BofA indices.

The corresponding spread is currently closer to 460 basis points (4.6%)about the average level of non-recession months, according to Friedson’s analysis. 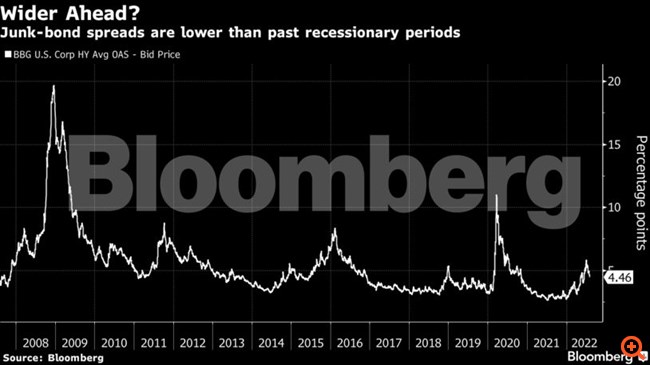 For his part, however, Loop Capital Asset Managemen chief executive Scott Kimball notes that much of the recent narrowing of spreads has been due to the performance of the category’s energy companies, which have outperformed the broader high-yield market this year as prices have soared. of the oil.

That might “distort expected default rates for the market downward and in turn give investors a bit more optimism about the high-yield market in general,” he adds.