But which of his shares suffered the heaviest losses, along with those that held them in their portfolio?

The following are the 10 companies whose capitalization received the biggest blow in 2022, at least until the first hours of the June 30 meeting.

These are not necessarily the stocks that had the worst return in percentage terms, but companies that are so large that the blow to the absolute size of their capitalization was greater.

Of course, this blow is currently only on paper for those investors who have been patient and have not sold their shares, expecting an upward turn of the market, whenever it comes.

So according to FactSet data, the technology giants Apple, Amazon.com, Microsoft, Alphabet, Metaas well as the giant of the automotive industry Tesla suffered the heaviest losses in absolute numbers. 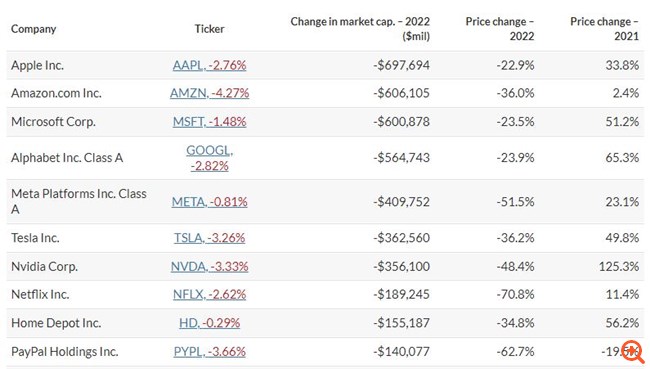 In terms of percentage losses under the broader index of the New York Stock Exchange, the list varies considerably:

The presence of the streaming giant is recorded in both lists, Netflixas well as the payment systems company PayPal.