If you ask the question: “Do domestic processors exist, and what are they like?” – most likely, the Elbrus and Baikal chips will come to mind first, rightly so, it is to them that public attention is now riveted. In fact, there are other domestic microprocessors, such as “KOMDIV”, developed by the Research Institute for System Research of the Russian Academy of Sciences (NIISI RAS). Under this brand, a wide range of microprocessors and microcontrollers is produced, mainly aimed at aviation and space.

The Research Institute for System Research or simply NIISI was founded in 1986 with the aim of researching and developing in the field of nanotechnology, information and telecommunication technologies and computer systems. The Institute is actively working and is itself a center of competence – it trains specialized specialists on the basis of its own postgraduate studies.

What are the processors “KOMDIV”

The KOMDIV family includes 32-bit and 64-bit processors. The former are based on the MIPS architecture, while the latter are based on the proprietary MIPS-compatible architecture “KOMDIV-64”. These are RISC processors with a set of simple instructions instead of complex and complex instructions in CISC processors. That is, to perform a complex operation, not one cumbersome narrowly sharpened instruction is used (as in CISC), but a set of much simpler commands. This approach allows more efficient use of processor time, due to this, overall energy efficiency is achieved. A similar RISC concept is used by ARM processors, familiar to everyone from mobile devices. Representatives of the opposite CISC camp are, for example, x86-compatible processors from Intel and AMD.

Let’s get back to our processors. In accordance with different bit depth and architecture, they are divided into two lines – “KOMDIV-32” and “KOMDIV-64”. Depending on the model, they may include system and peripheral controllers, cache memory, DAC, ADC, and even a video controller. That is, to be full-fledged systems on a chip with all the necessary functional blocks. Special requirements are imposed on operation in harsh conditions. For example, some models are radiation-resistant, and a common feature of both lines is a wide operating temperature range from -60 to +125 degrees Celsius.

The first to go into the series were 32-bit KOMDIV microprocessors, whose first representative went into production in 1999. The first-born were based on the 0.5 micron (500 nm) process technology, at best they took frequencies from 33 to 50 MHz and did not have any additional functionality. The line has been developing and developing to this day, the most modern known samples are based on the 0.25 micron (250 nm) process technology, take frequencies above 100 MHz and contain a set of interfaces and controllers on the chip.

These are highly specialized processors, or rather even microcontrollers, which manage very important systems in real time and perform strategically important calculations. They don’t need to process heavy media, so incredible performance isn’t required. Much more important is reliability, safety and the ability to instantly respond to changing conditions. The latter is one of the chips of architecture.

Why does the chip above have triple redundancy? Everything is simple, for reliability. This model is radiation-resistant and can work in outer space. Such KOMDIV-32 chips provide, for example, the operation of the on-board computers of the GLONASS-M satellites. For understanding, there is an incredibly high level of ionizing radiation in space, and conventional semiconductor electronics instantly fail. The thinner the technical process, the more difficult it is to protect the microcircuit from radiation, therefore microcircuits, including 0.25 microns, are still relevant in the space sphere. 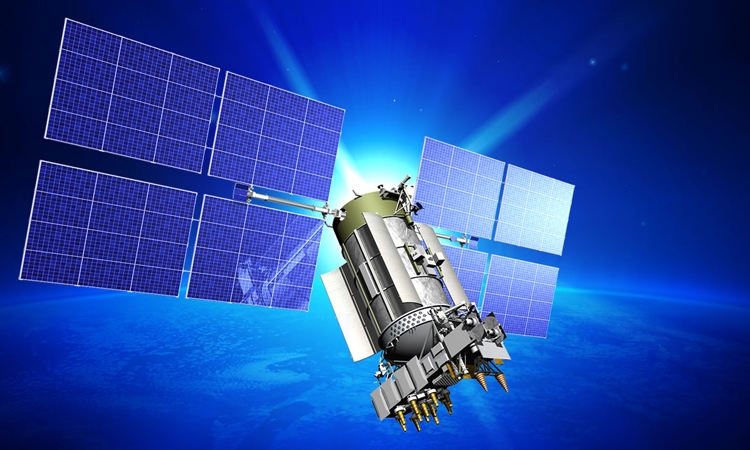 Production was originally on the basis of a mini-factory at the Kurchatov Institute in Moscow. Today, part of the microcircuits is produced by the Zelenograd Mikron. In any case, KOMDIV-32 were and remain domestic microcircuits, whose production is not trusted by foreign partners.

In 2005, 64-bit processors appeared. The first samples were based on the 0.35 micron (350 nm) process technology and could hardly overclock above 120 MHz. However, these chips have received a powerful development towards universality and eventually switched to 65 nm. The modern 1890VM8Ya is just assembled according to 65 nm TSMC, boasts 2 cores and a set of necessary controllers. On its basis, quite familiar devices are produced – both stationary computers, and monoblocks, and even tablets. But it is still impossible to compare them with those sold in stores, since all these are specialized machines for jobs in government agencies, banks and industry. Firstly, they are tailored for a very specific range of tasks and do not face unreasonably demanding multimedia and heavy modern Internet, like home computers. Secondly, the conditions of use can be very different, which means that computers based on “KOMDIV” must be hardy and unpretentious. 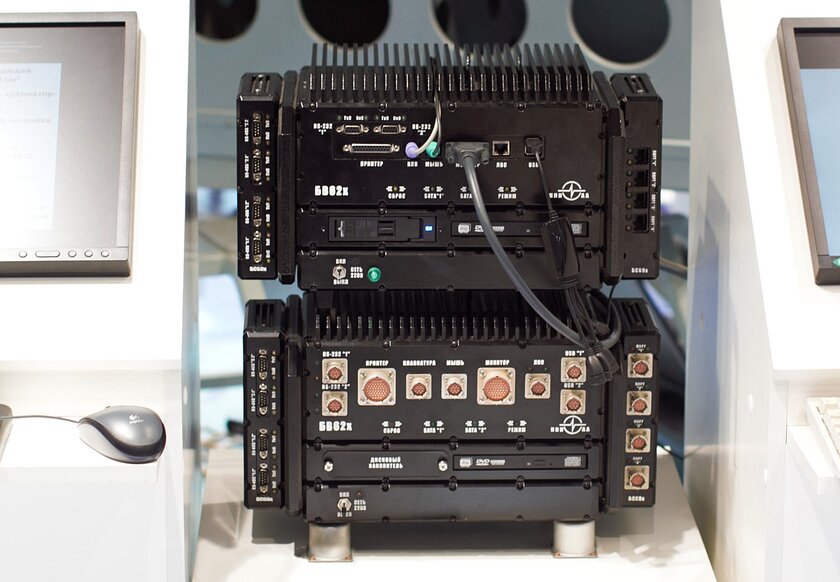 Initially, KOMDIV-64 thinner than 0.25 microns were produced at the facilities of the Taiwanese TSMC due to the lack of a prepared domestic factory. However, the requirements for them include the transfer of production to their own enterprises. It seems that this is exactly what happened with a pair of 65-nm chips – with the 1890VM108 microprocessor for embedded solutions and with the Komdiv-MK microcontroller. Both in 2021 were included in the register of Russian electronics. Getting into it indicates the transfer of production to the territory of the Russian Federation. 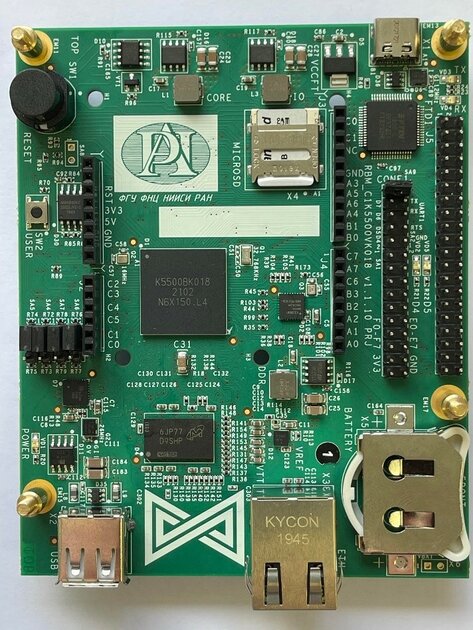 Of course, microprocessors and microcontrollers need their own operating system, and in the case of KOMDIV, a real-time operating system capable of instantly responding to changing environmental conditions. To be more precise, on the readings of sensors on the controlled device connected to a computer based on “KOMDIV”. For example, in the requirements for the current version of Baguette 4.0, the reaction speed is prescribed for a time from 1.5 to 200 microseconds (1,000,000 microseconds in 1 second). For comparison, general-purpose operating systems (such as Windows, Mac OS and Linux) are sharpened to quickly respond to user actions, and not to external conditions. The system, also known as “os2000”, is of course closed and is being developed by NIISI RAS itself in accordance with international standards. In addition to this, the accompanying software for the real-time operating system (RTOS) Baguette is being developed within the institute. 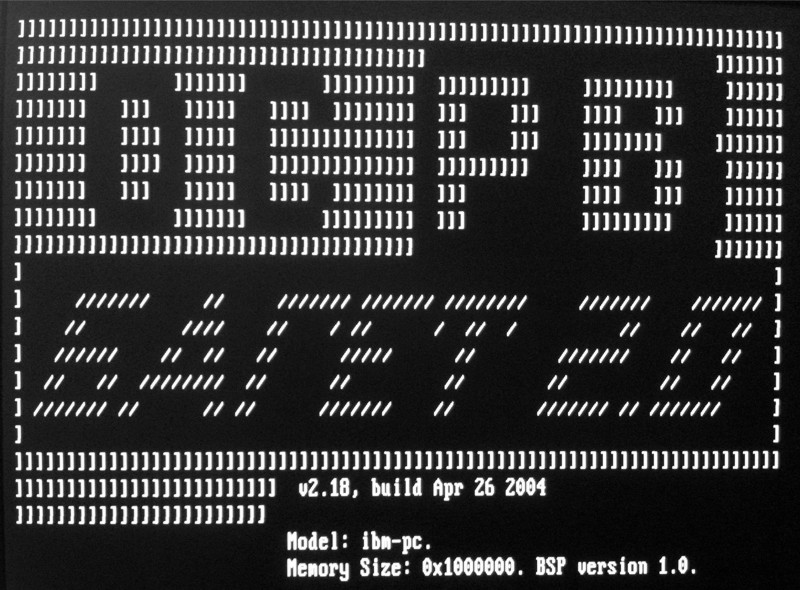 Safety is the priority, not performance

There is little open and reliable information about specific examples of the use of KOMDIV. This is a dual-use technique and it is not customary to talk about its capabilities. However, the next time you are at some exhibition dedicated to the domestic industry, pay attention to which processors this or that electronics is based on. I am sure you will meet “KOMDIV” more than once, moreover, in a completely motley technique.

Once again, in strategic areas, security and power of attorney are much more important than performance, so comparing the characteristics of KOMDIV with the universal processors Elbrus and Baikal is not entirely correct. However, since the NIISI RAS Institute has existed for 40 years, and the line is developing, it means that the chips cope with their tasks. And yet, this is a vivid example of the existence of domestic microelectronics. Only its few representatives are poorly focused on ordinary users, and solve strategic problems where maximum security and power of attorney are needed.

Little fish have antifreeze to survive in Greenland, study finds