Turkey: The three state banks are shutting down the Russian payment system

The three state banks of Turkey that allowed the operation of the Russian Mir payment system will abandon it after stern American warnings, announced a top Turkish official. “There are ongoing payments, but it has set date” to shut down the Mir system, the unnamed img told AFP without revealing the cut-off date. Until then, the three banksHalkBank, Ziraat and Vakifbank will allow the transactions with the Mir card.

Two of the largest private banks of turkey, Denizbank and Isbank, announced last week the discontinuation of the Mir payment system. On Friday, Uzbekistan announced that it had suspended for “technical” reasons the operation of Mir bank cards, which now are not used than in a few countries, among them the Belarusreports the Athens News Agency. 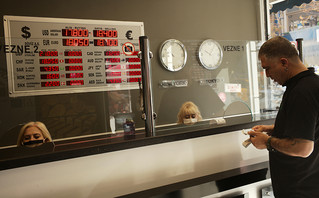 Very dependent on it Russian natural gas and oil, the Turkey refused to join Western sanctions against Russia after the invasion of Ukraine. Since the start of the war, Turkey, a favorite destination of Russian touristswelcomed a large volume of Russians.

Turkey had announced that it was expanding the scope of the Mir system after the meeting of the presidents Tayyip Erdogan and Vladimir Putin in early August. But Washington has warned Turkish businesses and banks that do business with Russia with it application of sanctions.