To commit war crimes makes a speech UN in his research on Russian invasion of Ukraine. The UN has until now referred to suspicions of war crimes, but today its investigators concluded that indeed atrocities were committed in the country.

The UN Commission of Inquiry on Ukraine was established in March by the UN Human Rights Council to conduct investigation into human rights violations committed by Russian forces.

The Council then adopted a new resolution in May, calling on the committee to specifically investigate serious human rights violations committed by Russian forces in the regions of Kyiv, Chernihiv, Kharkiv and Sumy.

During its investigations in those four areas, the commission visited 27 cities and towns and interviewed more than 150 victims and eyewitnesses, its chairman Eric Mose explained in an initial oral presentation of the report before the Council. 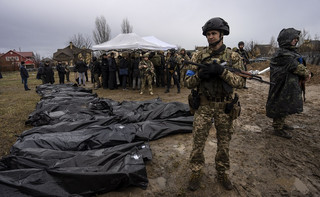 The witnesses, he added, gave converging accounts testimonies of ill-treatment and torturewhich were committed during their illegal detention.

Some of the victims reported that, after an initial detention by Russian forces in Ukraine, they were taken to Russia and held for weeks in prisons.

“They said that they were beaten, they were subjected to electric shocks and forced to be nakedas well as other kinds of violations in these detention centers,” stressed Moze, who also pointed out that after being transferred to detention centers in Russia, some victims disappeared.

Cases sexual violence they were also reported to the UN investigators. In some cases, relatives were forced to be present when these crimes were committed.

In the cases investigated by the commission, the age of the victims of sexual or gender-based violence ranged from 4 to 82 years.

The committee also documented cases in which children were raped, tortured and illegally imprisoned. “Children were also killed and injured in indiscriminate attacks with explosive weaponsMoses complained.

He finally mentioned that the commission also had to deal with two cases of ill-treatment of Russian soldiers by Ukrainian forces.

“Although they are not many, these cases are still the subject of our attention” he assured.

Number of Covid cases rises 262% in Brazil in two weeks