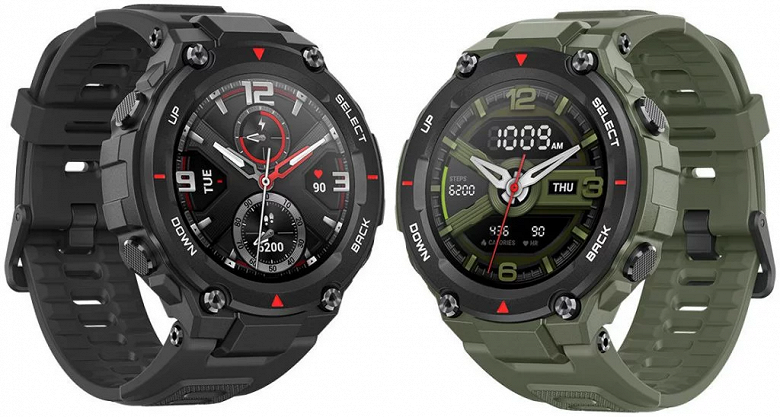 The indestructible Amazfit T-Rex smartwatch, which came out at a price of $ 140, is now offered for $ 110 worldwide, including the American Amazon and Aliexpress with free shipping to Russia.

The device meets the IP68 protection degree and the requirements of the American military standard MIL-STD-810G. The watch can withstand extreme temperatures, is resistant to corrosion, and is reliably protected from dust and moisture. The Amazfit T-Rex smartwatch is equipped with a 1.3-inch AMOLED screen with an always-on display function. The screen has a resolution of 360 x 360 pixels and is protected by Corning Gorilla Glass 3.

Along with an optical sensor for 24/7 heart rate monitoring, the device also features a three-axis acceleration sensor, a geomagnetic sensor and an ambient light sensor. To ensure communication, he received Bluetooth 5.0 LE and GPS + GLONASS. The watch is compatible with smartphones running Android 5.0, iOS 10.0 or later versions of these operating systems.

Amazfit T-Rex received 14 sports modes and a waterproof construction (5ATM). The device is powered by a 390 mAh battery, which is said to provide up to 20 days of battery life on a single charge.

AUD / USD is trading deeply lower near 0.7350 as focus shifts to Wall Street