USD/JPY Price Analysis: Drops to a new monthly low around 127.00, below the 38.2% Fibonacci level

The pair USD/JPY struggled to capitalize on its initial positive move and witnessed a turnaround from the 129.00 area on Thursday. The sharp intraday drop, which marked the second consecutive day of negative movement, dragged the pair to a new monthly low around 127.00 during the early American session.

Growing concerns over weakening global economic growth continued to weigh on investor sentiment, triggering a new wave of risk aversion. This was revealed in a sea of ​​red in equity markets, which boosted demand for the traditional safe haven Japanese yen and put strong downward pressure on the USD/JPY pair.

Risk aversion led to a sharp drop in US Treasury yields, triggering aggressive US dollar selling and further contributing to the heavily offered tone around the USD/JPY pair. The bearish trajectory could also be attributed to some technical selling after a sustained break below the 128.00 round level.

Further weakness below the 127.50 area (previous monthly low), which coincides with the 38.2% Fibonacci retracement level of the 121.28-131.35 rally, could be seen as a new trigger for bearish traders. Follow-up selling below the 127.00 round figure will reaffirm the negative outlook and pave the way for further losses.

The USD/JPY pair could then accelerate to the test of the next relevant support marked by the 50% Fibonacci level, around the 126.25 region, before eventually falling to the 126.00 level. The corrective decline could extend towards the key psychological level of 125.00, which should act as a short-term base for the pair.

On the other hand, the recovery attempt above the 127.50 support point (38.2% Fibonacci level) could be seen as a selling opportunity. This, in turn, should cap the USD/JPY pair near 128.00, which is followed by resistance near the 128.30 region. A convincing break of the latter should allow the bulls to target the 129.00 level again. 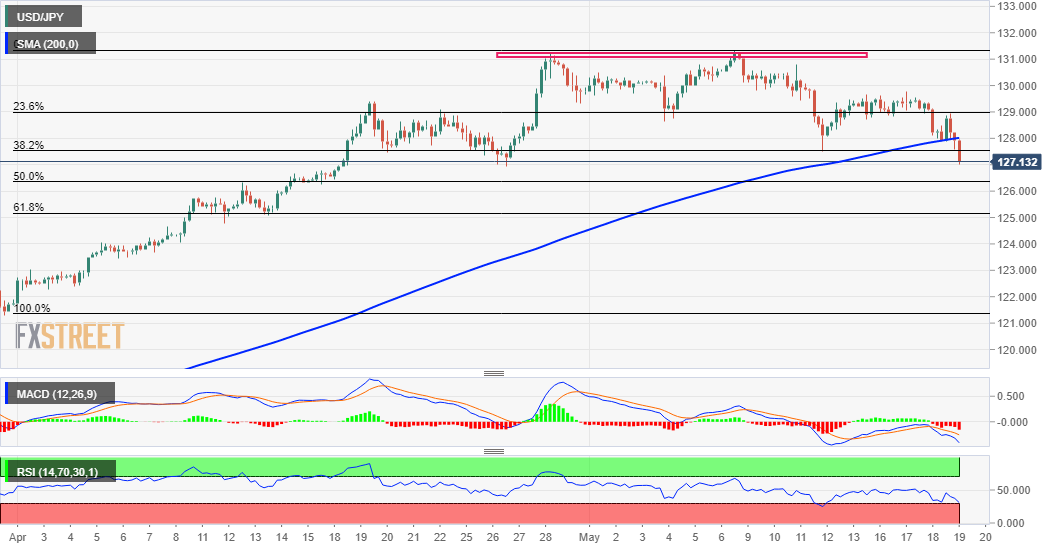 Wall: With a positive reaction 1% entered the second half…

USD/CHF Price Analysis: Buyers step in and lift pair on…

Ukraine: Johnson-Zelensky conversation on the future security of the country

AUD/USD recovers the 0.6800 level although remains under pressure in a mixed…

Gold Forecast: XAU/USD bounces back above $1,800 from a five-month low

EUR/USD falls below 1.0400 after disappointing US ISM