The pair USD/JPY rose during the early part of the American session and hit a three-day high in reaction to better-than-expected US retail sales figures. The pair last hovered around the 129.75 area, up 0.40% on the day, with the bulls now looking to build on the momentum beyond the 200-period SMA on the 4hr chart.

The risk appetite boost, represented by a strong rally in equity markets, undermined the safe haven of the Japanese yen and helped the USD/JPY pair regain traction on Tuesday. In addition, a nice rally in US Treasury yields acted as a tailwind for spot prices, although broader US dollar weakness could limit gains.

From a technical point of view, the USD/JPY pair appears to have confirmed a bullish breakout through a two-day trading range. Meanwhile, technical indicators on the daily chart remain comfortably in bullish territory and have started to gain positive traction on the hourly charts again, adding credence to the constructive setup.

However, any further upside moves are likely to be capped by a descending trend line. Such a hurdle lies just before the key psychological level 130.00, which now coincides with the 61.8% Fibonacci retracement level of the 131.35-127.52 corrective decline and should act as a sweet spot for short-term traders.

A convincing breakout of the aforementioned confluence barrier would set the stage for a resumption of the previous uptrend. The USD/JPY pair could then break an intermediate hurdle near the mid-130.00 level and reclaim the 131.00 level. The bulls could challenge a two-decade high again, around the 131.35 area.

The next relevant support is set near the lower end of the trading range, around the 128.70 region, which if broken would change the bias in favor of bearish traders. The subsequent drop would expose intermediate support near the 128.30-128.20 region before the USD/JPY pair breaks below the 128.00 mark and retests the 127.50 level (Fibo. 38.2%). 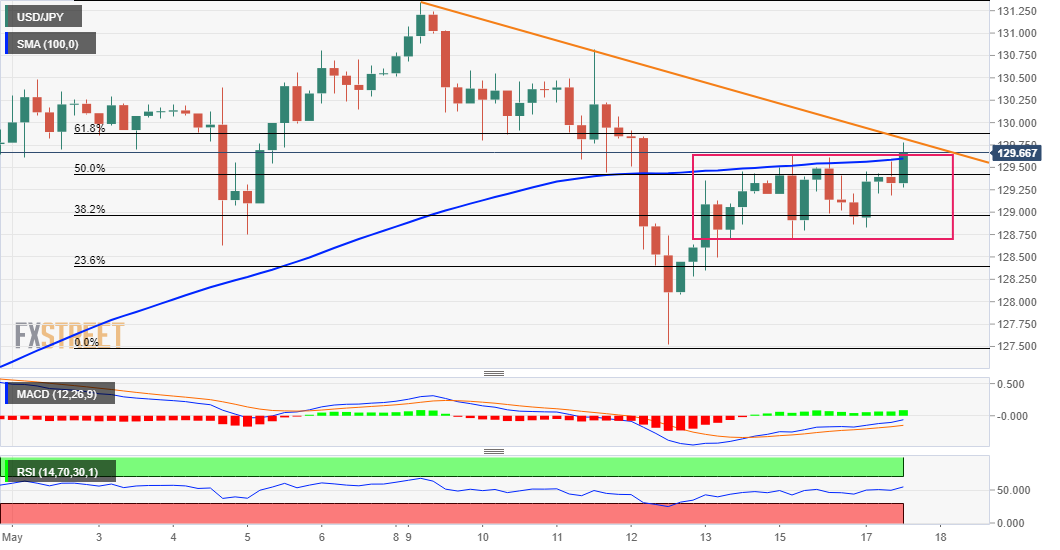 EUR/USD Price Analysis: The upside remains capped by the…

Indian couple sues only child for not having grandchildren

US: CB Consumer Confidence disappoints and falls in June to 16-month low at 98.7

Negative turn on the Wall, the indices lost their gains