In a document obtained exclusively by the CNN the Graduation Commission for students of the USP Faculty of Medicine (FMUSP) argues that the transfers made on behalf of the then president of the commission, Alicia Dudy Müller Veiga, are contrary to the provisions of the contract with the company ÁS Formaturas, responsible for administering the funds raised over four years.

“We are confident in stating that ACE is responsible for transfers made to an individual account, contrary to what is established in the contract”, they declare.

In a note, the company had informed that all transfers to the president of the commission were communicated to the Graduation Commission – which has 20 students – through a management report and messages sent via e-mails and WhatsApp group bringing together the commission and the ACE.

The Commission’s clarification document sent in response to the company states that the only report sent in the WhatsApp group is a spreadsheet dated August 2022 and forwarded in the middle of a mid-afternoon discussion between Alicia and the representatives of ÁS Formaturas, when the total amount of BRL 750,000 had already been transferred to the former president’s personal accounts. “In the written messages there is no mention of the amounts transferred to Mrs. Alicia”, they conclude.

The graduates highlight photos of the contract, which states that the transfers of the amounts collected should occur to the contractor, which, according to them, was not Alicia, an individual, but the Associação da Comissão de Formatura, a legal entity in formation. “Therefore, it is evident that ACE does not comply with the truth when it says that it correctly fulfilled the contract”, they complete.

In response to CNN, the company states that the contract provides for the need to create an Association, which would be the legal entity to represent the Graduation Commission. However, despite the fact that the contract was signed in August 2019, until the beginning of this year the Association had never been created.

“Clause 1.7 of the contract provides for the possibility of defining an account by the Graduation Commission for carrying out transfers (return of values), which may be the account owned by the Association to be created, or by third parties.”

The company refutes the Graduation Commission’s allegation that it “would not be aware of the transfers” by submitting an email on November 17, 2021, in which Alicia informs the current account in her name as the destination of the amounts collected, added to the investments. The first transfer, worth BRL 604,000, would have taken place in November 2021. 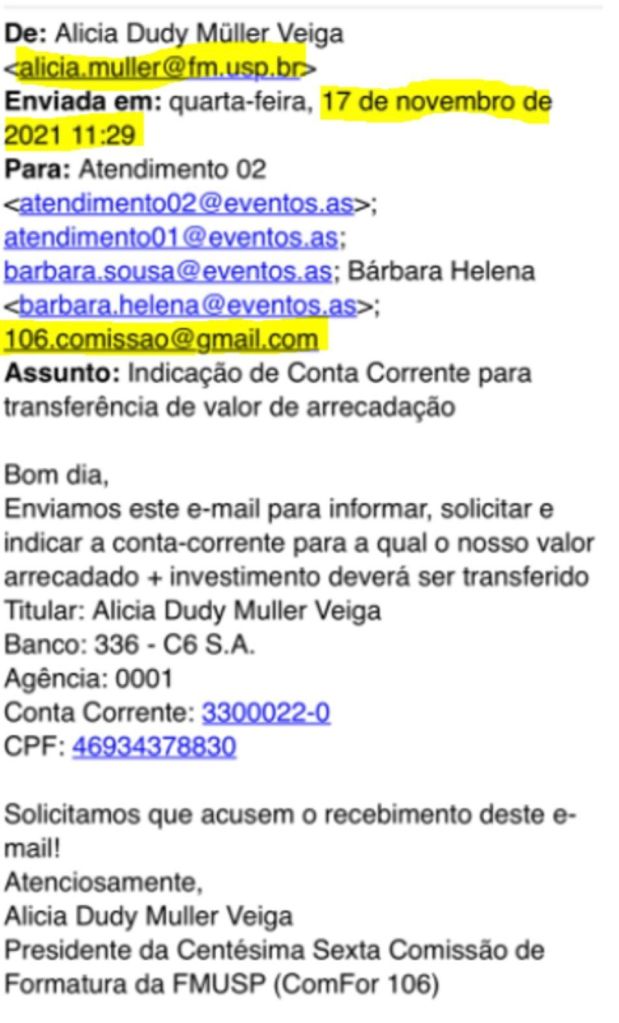 The commission shows through prints that the company informs a platform that would be updated in real time with the amount collected. According to the platform’s image captures, so far the value of 940 thousand has been recorded, with no output of values.

ÁS Formaturas was notified again by Procon-SP, after, according to the organ, not responding adequately to the questions. The company asked to provide the information in person. The meeting will take place next Monday (23). “If ÁS Formaturas has not taken care of the consumers’ assets, that is, if it has not properly guarded the values, it may respond to administrative proceedings”, says the Procon-SP.

In an interview with CNN , last Sunday (15), the current president of the graduation committee, Gabriela Sarti, said that she does not rule out the possibility that Alicia had internal help from the company to transfer the money to her personal account, according to her, outside of the protocols. Sought again, she did not return contact.

I’m James Harper, a highly experienced and accomplished news writer for World Stock Market. I have been writing in the Politics section of the website for over five years, providing readers with up-to-date and insightful information about current events in politics. My work is widely read and respected by many industry professionals as well as laymen.

Roraima to set up shelter for Yanomami