Why smartphones need shells instead of pure Android. 4 reasons not to argue with

In one of my previous articles, I described the shortcomings of Android skins that almost every smartphone manufacturer uses. In 2021, there are not so many well-known brands left on the market that can boast of pure Android in at least one of the series of their smartphones, not to mention its use on all devices of the brand. There is an explanation for this behavior of manufacturers.

OxygenOS: there is a Canvas mode, quick launch of applications and the ability to create their clones

It’s no secret that pure Android, even with Google services, is not famous for its functionality and abundant personalization. Most often, in order to take advantage of functions that have been in other shells for a long time, users have to download third-party applications from Google Play. This is precisely why smartphone manufacturers want to save their device buyers from such a disadvantage.

The problem here is that to implement even one function, you have to modify the system deeply from the inside, change its behavior and basic elements, which makes it much easier to invest a little more money and make your own shell with an abundance of different chips than to try to modify Android in such a way, so that the old and the new work together. It is for this reason that small Chinese companies that cannot afford such expenses use a slightly modified pure Android, which they add small low-cost chips, most of which, by and large, are not needed by anyone and are made for jackdaws.

For recognition, after all, AOSP, whatever one may say, is a Google project 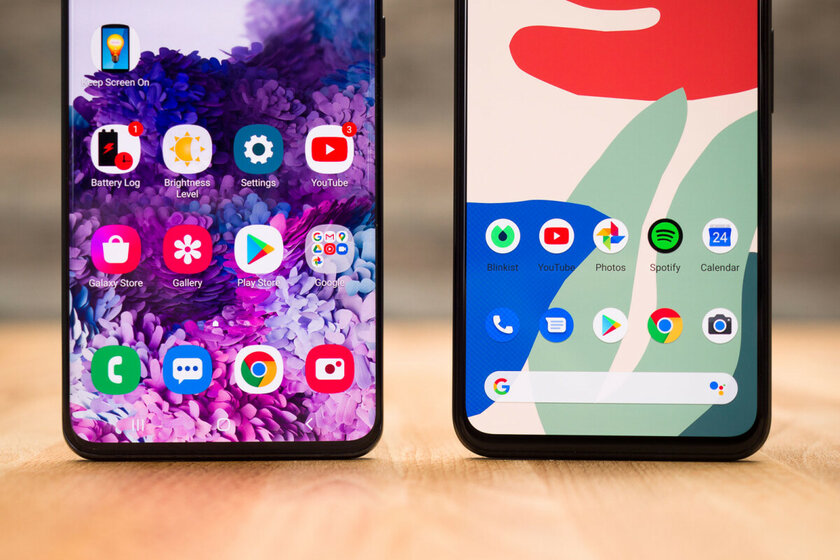 Although pure Android is considered an open source project, it is de facto developed by Google, and everyone knows about it. If the brand does not create its own shell, then it will turn out that only a set of characteristics will remain from the manufacturer in the smartphone, and most of the software will somehow belong to Google, especially considering that every smartphone now needs to build in GAPPS, otherwise it will not provide the necessary the number of sales. If a brand uses its own shell, then in this way it declares that it is unique and competitive, since it provides the user with its own appearance of the system, a set of chips, and also declares its “philosophy” and approach, which, of course, is a common marketing ploy … Suffice it to recall the recent presentations of Xiaomi or Samsung, where the above stated about, for example, inspiration from nature when developing a new version of their shell.

To keep up with the current ecosystem race

Apple has become a pioneer in the world of ecosystems in the modern sense of the word, and other manufacturers do not want to lag behind. As we have already found out, it is quite difficult to build native functions into pure Android at the system level, so the only way to organize the Android and Windows ecosystem in this situation is to preinstall various third-party applications, which is not suitable for brands, since it will work so-so, to put it mildly. For the ecosystem to function normally, such functions must work directly in the system itself, which can only be achieved by creating your own shell. You don’t have to look far for examples – the leaders of Android ecosystems are now Samsung and Huawei / Honor, both of which produce smartphones with their own shells and Windows laptops with built-in utilities for the functioning of these ecosystems. The same applies to bundles with headphones, smart watches, TVs and other devices belonging to the same brand. Such bundles are able to offer the buyer additional functions, for example, control of noise canceling in headphones or remote control of the TV, which in turn encourages users to purchase products of one particular brand.

Because few people can follow the rules of Android One

It’s no secret that Android One sounds fantastic (constant updates, pure Android, quality control from Google) to the user, but for manufacturers, even such a not-so-burdensome environment becomes a problem. Along with uniqueness, brands certainly want to be self-reliant and independent as much as possible. The Android One program runs counter to this desire, which is why manufacturers are not eager to create even separate lines dedicated to Android One, let alone a full-fledged introduction to the program.

Until recently, Xiaomi had a series of Mi A, which was popular and in demand, but the Chinese company, apparently, could not cope with the necessary delivery times for updates, deteriorating their quality, which is why over and over again news appeared in the media about how another software update released for this line was killing smartphones. And Xiaomi, meanwhile, occupies the tops in sales, so there is simply no need to talk about smaller companies that have less funds and specialists.

Another thing Nokia is far from being a giant, but all of its modern smartphones are included in the Android One program. This is due to the fact that Nokia initially took a course on equipping its devices with pure Android, and it does not spend money and time supporting its own developments. Among other things, this brand, even at the initial stage of modern history, had a huge fan base and cult status, which prompted HMD Global, which owns this brand, to take a chance. As you can see, this risk has borne fruit.

FTX collapse is not solely to blame for crisis in the cryptocurrency sector; understand