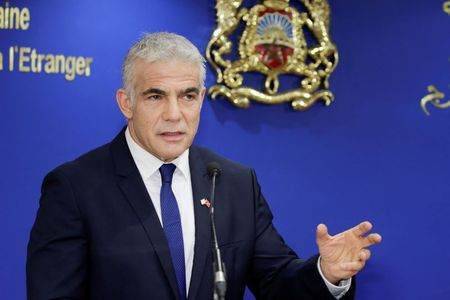 A ceremony at the Israeli government office marked the handing over of the post of prime minister to Yair Lapid, this Thursday (30), who takes over as interim until the November 1 elections.

The then centre-left foreign minister, Lapid will replace Naftali Bennett as prime minister of a provisional government with limited powers.

He said he had a commitment to Israel’s past and future, and promised to do what was best for the Jewish state.

Naftali Bennett, then Israel’s prime minister, decided last week to dissolve parliament after infighting made his ruling coalition untenable. Bennett’s departure from the command comes after a year, the result of a political defeat that happened earlier this month.

The coalition government failed to reach an agreement to renew an emergency law that preserves the two-tier system in the West Bank, with Israeli civil law applied to Jewish settlers living in the settlements, and military law applied to Palestinians.

The current Israeli government is formed by an unlikely coalition of right and left parties. And it is the first to include the caption representing the 20% of Palestinians living in Israel. Now, there is talk of the possible return of Benjamin Netanyahu, who ruled the country for 12 years and is accused of corruption.

Before the vote that dissolved the Knesset (Israeli parliament), the former prime minister said that the change promised by Bennett’s coalition had not come, and that the right-wing Likud party was the only alternative to a stable, strong and nationalist government.

The next few months are likely to be marked by political uncertainty, as the country prepares for its fifth election in less than four years.

Opinion polls indicate that Netanyahu’s party is the strongest, but it is not clear whether he will win a parliamentary majority to form a government without the need for a coalition.

Lapid and Bennett ended Netanyahu’s record reign a year ago, forming a rare alliance of rightists, liberals and Arab parties that has lasted longer than many expected but has recently faltered amid infighting.

The US government has offered its “warmest congratulations” to new Israeli Prime Minister Yair Lapid, Secretary of State Antony Blinken said on Thursday.

Lapid will lead the government during the November elections.

Naftalli Bennett will not run in new election

Naftali Bennett announced on Wednesday that he will not run in the next elections, but that he will keep his position as alternate prime minister after his coalition partner Yair Lapid takes over the head of the interim government.

“I leave behind a prosperous, strong and secure country,” he told reporters on Wednesday. “We proved this year that people with very different opinions can work together,” he added, referring to his ideologically diverse coalition.

Netanyahu, now leader of the opposition, was delighted at the end of what he called the worst government in Israel’s history. He hopes to win a sixth term despite being on trial for corruption on charges he denies.

Polls showed his right-wing Likud party leading the polls but still falling short of the majority in government despite support from allied religious and nationalist parties.

Lawmakers from the pro-Netanyahu bloc said they were working to form a new government before parliament was dissolved. This scenario, which seems remote, would ruin an early election.

*With information from CNN International and Reuters