Inauguration of the Alzheimer’s Day Center PAGNI “Nefeli” and strengthening of the KMPSY of PAGNI. by the Deputy Minister of Health, Zois Rapti

The inauguration of the Alzheimer’s Day Center of PAGNI. “Nefeli” was held on Friday by the Deputy Minister of Health, Zoe Rapti, in the presence of a limited number of guests and in compliance with all the prescribed measures against the spread of Covid disease19.

The inauguration was performed by the Bishop of Knossos Mr. Prodromos and was also attended by the Deputy Minister of Culture and Sports, responsible for sports Mr. L. Avgenakis, the Member of Parliament for Heraklion Mr. M. Senetakis, the Regional Governor of Crete Mr. S. Arnaoutakis of 7 Minister of Foreign Affairs Mr. L. Bourboudakis, the Commander of PAGNI Mr. Chalkiadakis, the Deputy Commander of the 7th Ministry of Foreign Affairs Mr. D. Agapiou, the Deputy Commander of PAGNI Mr. Kteniadakis as well as the management and staff of the Psychiatric Clinic. 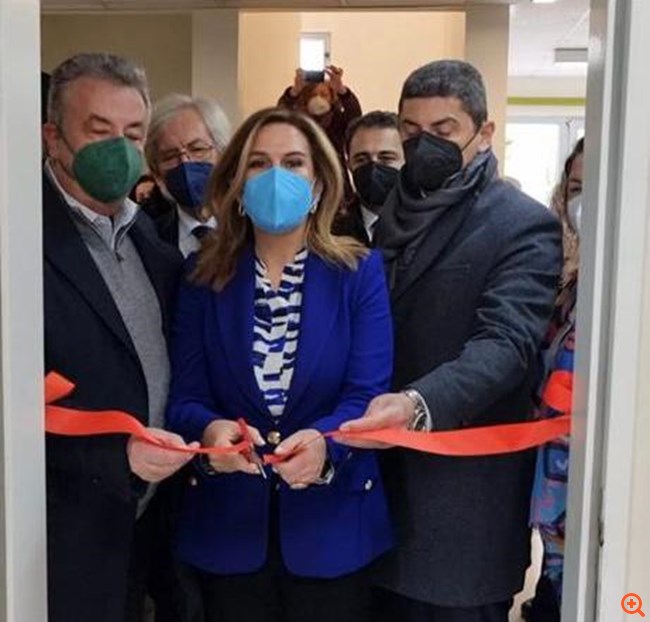 The “Nefeli” Day Center is a complete structure of diagnosis, therapeutic monitoring, mental empowerment and creative employment of both patients with Alzheimer’s disease and / or other types of dementia and people with mild memory difficulties (Mild Mental Disorder) addressed to It is estimated that it will serve about 950 people in the first phase of operation of the program. The aim is to help both the sufferers themselves and in this way to support their families.

The project is funded in the first phase by the NSRF of the Region of Crete and then will be included in the budget of the NSS.

Also, with a recent decision of the Deputy Minister of Health, Mr. Zois Raptis, the Mobile Mental Health Unit of PAGNI is reinforced with staff, in collaboration with a body of PSYCHARGOS, based on which a psychiatrist, psychologist and child psychologist will join the Mobile Unit.

This support will allow the more frequent and systematic presence of our Mobile Unit, in the Inland Health Centers of the Prefecture of Heraklion.

After the inauguration, the Deputy Minister of Health, Ms. Zoe Rapti, stated:

“I can assure you that we are here. That the pandemic has taught us, among other things, that in crises one should not be alone.

That solidarity, humanity is our guide and the support of the National Health System is our non-negotiable priority. That science and faith must go hand in hand. Because the common goal is to save lives.

“Society must remain upright and healthy, physically and mentally.”

Croatia lost almost 10% of its population in 10 years

US consumer confidence in January is 2nd lowest in a decade

SYRIZA: ‘Mr. Mitsotakis to reveal the truth about Maximos’ relationship…

US orders family members of Ukrainian embassy employees to leave

Jane Harper Jan 24, 2022 0
The United States said Sunday it was ordering the departure of eligible family members of its embassy staff in…

Occupied: Record of abstention in the “parliamentary”…

Jan 23, 2022
Percentage of 58.23% of Turkish Cypriots voters exercised their right to vote early elections which took place on…

Armenian President Resigns Because Constitution Doesn’t Give Him…

Jan 23, 2022
Armenian President Armen Sarkissian resigned on Sunday, saying he believed the country's constitution did not…

Υπ. Education: Distance education for those schools that…