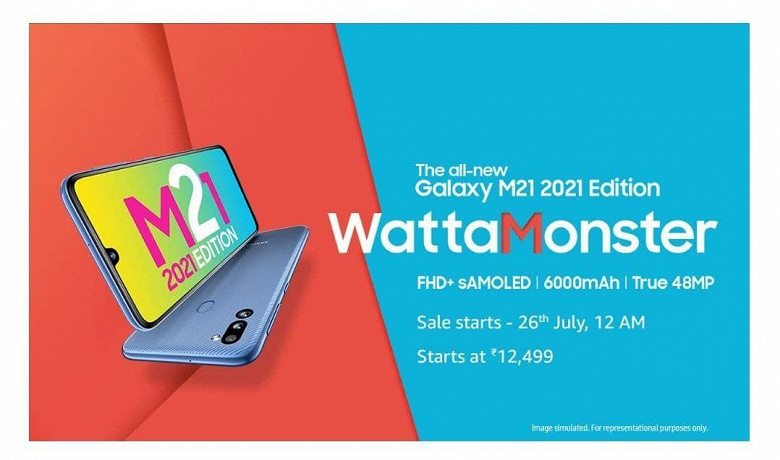 Samsung has released a re-release of last year’s popular Galaxy M21 smartphone. The novelty is called the Galaxy M21 2021 Edition and it is still presented in India. The version with 4 GB of RAM and 64 GB of flash memory is priced at 12,500 rupees, but the rates of the rupee and the ruble against the dollar are almost the same, so it would not be a mistake to estimate the cost of the model at 12,500 rubles.

And for that kind of money, this is a good offer, because the smartphone is equipped with a Super AMOLED screen with a Full HD + resolution and a diagonal of 6.4 inches, a triple camera with 48, 8 and 5 megapixel sensors, and a 20 megapixel front camera. And most importantly – a 6000 mAh high-capacity battery. True, it will take a long time to charge, since the maximum power of wired charging is only 15 watts.

Galaxy M21 2021 Edition is built on the Exynos 9611 SoC platform and runs Android 11 with One UI 3.0. The smartphone received a side fingerprint scanner and a standard 3.5 mm headphone jack. The model is 8.8 mm thick and weighs 188 grams.

An updated Porsche Macan was brought to Russia: even more powerful, but without a Turbo version

Aug 3, 2021
The governor of New York State, the Democrat Andrew Cuomo, "Sexually harassed many women," according to the…

Lebanon: One in three children remain “hurt” mentally by…

Aug 3, 2021
Several children who survived the catastrophic explosion in the port of Beirut a year ago are suffering from…

Aug 3, 2021
A vaccination certificate will be required at New York to get inside restaurants, gyms and entertainment venues,…

Aug 3, 2021
Moratorium on evictions or power outages. The Spanish government yesterday until the end of October extended a…
Prev Next 1 of 4,222
More Stories