Alaska: It is faced with the strongest storm in the last 50 years

A storm, characterized by rare power, hits her Alaskawhipping up massive waves and causing widespread flooding, the US Weather Service (NWS) announced on Saturday.

“The remnants of Hurricane Merbok will batter western Alaska over the weekend, bringing massive waves, hurricane-force wind gusts, coastal erosion and heavy rains”the NWS said on Twitter. “The floods will get worse”he warned, as the impact of the storm is already evident.

“This is the strongest autumn storm we’ve seen in the Bering Sea in 50 years”Rick Toman, a climate researcher from the University of Alaska, told AFP. 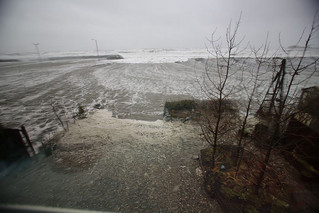 In the coastal village of Golovin, the school grounds were turned into a lake. Buildings were flooded and at least two homes were swept away by the rushing waters, officials in Fairbanks, Alaska’s second-largest city, said.

Waves over three meters high and wind gusts of up to 145 km/h have been recorded so far in the area, according to the US Weather Service.

Users unhappy with Musk’s purchase of Twitter have few alternatives