Always loved Apple, but the iPhone 14 is a total disappointment. Convinced of 5 reasons

Unlike most of my friends and, I’m sure, readers of this site, I was almost always impressed by Apple – the company, of course, overcharges its products, but the overpayment is most often worth it and is largely justified. But the iPhone 14 personally only causes dissatisfaction with me – the smartphone turned out to be as boring and unprincipled as possible, it seems that Apple has been marking time all year. I immediately identified 5 reasons why I would not buy it myself and advise others to choose the iPhone 14 and 14 Plus – they are all pretty obvious, but as a bit of an Apple fan, I can’t help but pour out my soul.

Previously, Apple was reproached for the thickness of the frames, but now, apparently, it’s time to hate it for slow displays. In the Android world, an increased screen refresh rate appeared a long time ago, now even budget models get 90 Hz, or even 120 Hz (instead of 60 Hz). There is a widespread opinion among Apple fans that the high frequency of the display in the iPhone is not so much needed, since the animations in iOS themselves are smoother than in Android and numerous skins based on it. This may be true, but there is one problem.

The display is really great. But only in Pro models
- Advertisement -

The benefits of a screen with a higher refresh rate are revealed not at all when scrolling through the main screen, where iOS animations are visible, but in the browser, instant messengers and social networks – where the content is scrolled quickly. When the iPhone 13 Pro came out with 120Hz screens, reviewers unanimously noted that the difference is noticeable – this canceled out all the excuses of Apple fans that a fast display is not needed.

Last year’s processor is a payment for obsolete technology

In fact, this issue is somewhat overblown. I have always been convinced that the performance of flagships is enough with a margin for several years, so the standard annual increases of the level of “+ 15% to performance and + 10% to energy efficiency” have never been perceived as anything but beautiful numbers. I am sure that the vast majority of people will not encounter any problems due to the presence of last year’s processor inside – in addition, the iPhone 14 uses the chipset from the iPhone 13 Pro (and not the regular iPhone 13), it has one more graphics core. 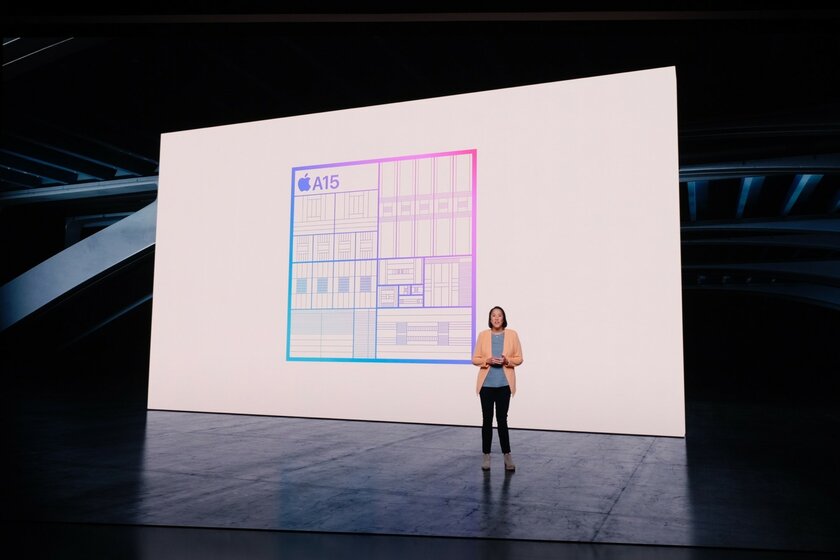 Only Apple can present last year’s processor so colorfully
- Advertisement -

However, the fact that, having paid a lot of money for a brand new model, I actually get outdated hardware depresses me. And this despite the fact that new iPhones cost the same at the start of sales as the old models cost (equipped with an advanced chipset at the time of release). The unpleasantness of this fact is further aggravated by the fear of reduced support – it is likely that the iPhone 14 and 14 Plus will stop receiving updates a year earlier than the Pro models, their life cycle will end simultaneously with the death of the iPhone 13.

For some reason, Always-On mode is exclusive to the iPhone 14 Pro

In the world of Android, Always-On has been around for so long that it has become an integral feature of any smartphone with an OLED display. It shows a clock widget, notification counter and other useful information on top of the locked display, with almost no power consumption. In iOS 16, the Always-On feature is implemented a little differently (for example, the wallpaper does not turn off completely, but is very dimmed), and it is only available for the iPhone 14 Pro and 14 Pro Max. 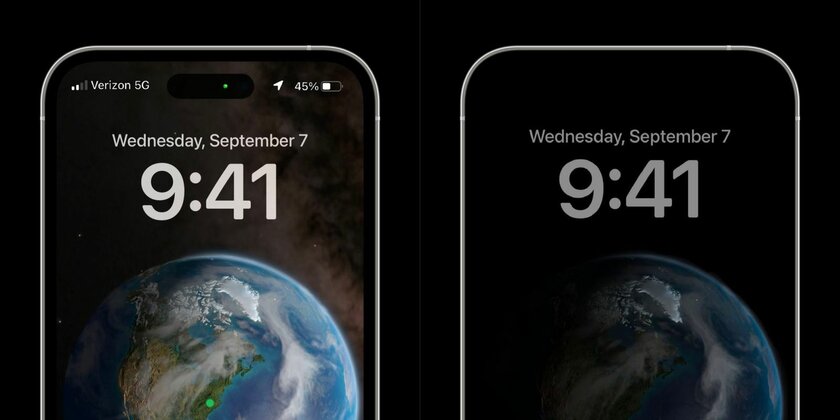 Always-On in iOS 16 works a little differently than in Android. It keeps the background image

According to Apple, for the Always-On mode, she needed to implement several new technologies, the main of which is to reduce the refresh rate of the locked screen to 1 Hz (1 time per second). It was made possible allegedly thanks to the new display engine built into the A16 processor.

I am not an engineer and it is difficult for me to judge how difficult it would be to implement Always-On without a separate super-advanced display engine and other related technologies. But I don’t really care: Android devices have this feature, even in cheap models, and I would really like to see it in a non-$1,000 iPhone.

The iPhone mini was abandoned. It was a unique smartphone

Both iPhone 12 mini and iPhone 13 mini differ from regular models only in size. They have exactly the same cameras, processor and capabilities, just a smaller screen, lower autonomy, smaller dimensions and lighter weight. Mini versions of the iPhone were almost the only compact smartphones without compromises, where buyers did not sacrifice any functions and characteristics. 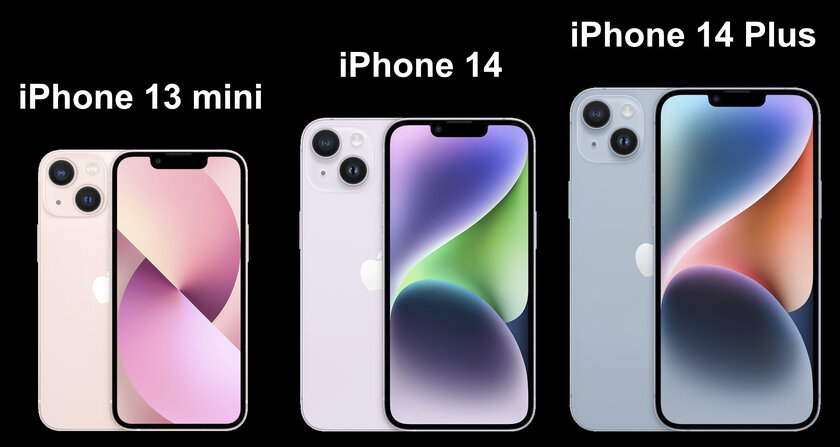 iPhone mini did not become popular, but was needed

With the release of the iPhone 14 series, developers abandoned the iPhone mini – apparently forever. Apple cannot be criticized in this, since the iPhone 12 mini and 13 mini showed terrible sales, they were probably difficult to manufacture and, apparently, are simply not interesting to most potential buyers.

I have confidence that the iPhone 14 Plus is a successful smartphone for Apple that will sell on par with the regular model or even better (the iPhone 13 Pro Max sold better than the iPhone 13 Pro, although the differences are only in size).

However, I am convinced that the smartphone market will get worse without the iPhone mini. It has a huge drawback in the form of a small font (if you increase it, the text will not fit into the interface, and too little information will fit on the screen), but it is more than covered by compactness. I am sure that there is a certain category of people who consume content mainly from a computer or tablet, and a smartphone is used most often for instant messengers, photography and basic tasks – such users do not need a “shovel” that stretches the pocket of any jeans and rests on the thigh when sitting .

In iPhone 14, even the design has not changed. Apple, seriously?

No matter how buyers focus on features and price, the design of a smartphone is far from the last thing that is paid attention to when buying a new product. Apple has always understood this and made each new iPhone different from its predecessor, albeit sometimes quite minimally (even the changed location of the camera eyes in the iPhone 13 brought freshness and recognition). 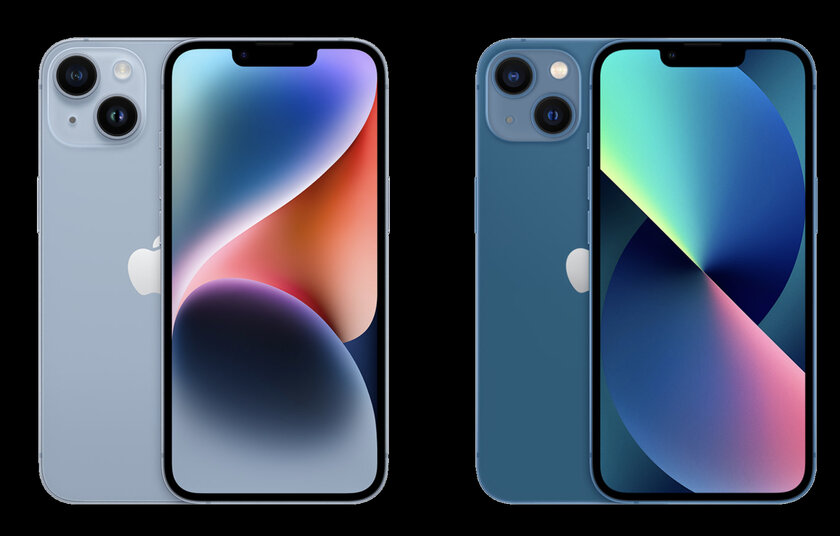 However, the iPhone 14 is absolutely no different from its predecessor in visual terms, with the exception of the introduction of new colors, changes in previous shades and the abandonment of some old body colors. The preservation of last year’s design can hardly be attributed to the shortcomings of the smartphone (rather, to the “May not like” category), but the fact itself only emphasizes that the iPhone 14 is marking the company in place.

Previously, Apple updated the iPhone number every two years, releasing models with the prefix “s” in between, a slightly improved version of last year’s smartphone. Recently, the “apple corporation” has been following the same strategy, only calling each model a new number: after the iPhone 7, an improved clone came out in the face of the iPhone 8, the iPhone X was followed by the upgraded iPhone XS, after the iPhone 11 came the updated iPhone 12.

It is clear that the new number is a significantly stronger marketing tool than the additional letter (it seems to indicate that there is nothing fundamentally new and encourages you to think about whether minor changes are worth a significant overpayment). In addition, it cannot be said that the matrices that capture more light and autofocus on the front camera do not attract attention.

But in the case of the iPhone 14, even die-hard fans are unlikely to believe that this is a smartphone worth overpaying for compared to the iPhone 13 or even the iPhone 12.