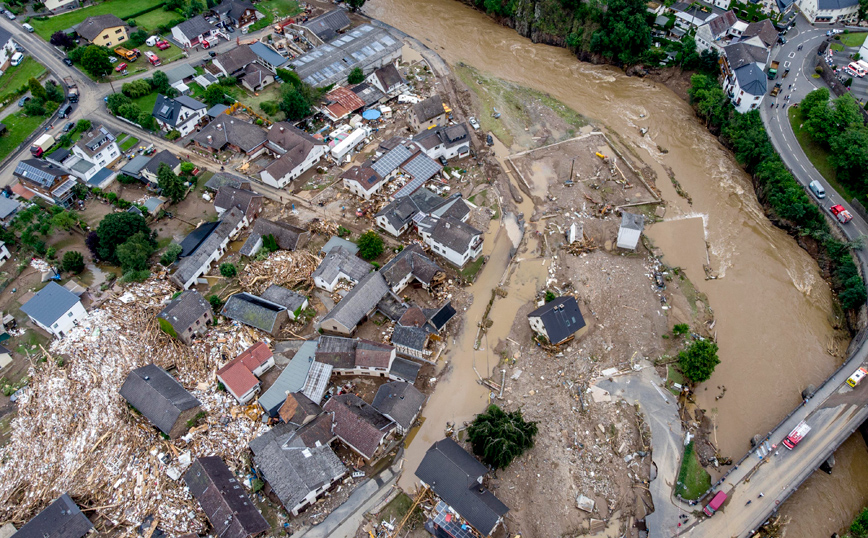 Torrential rains and floods cost life at least 67 people, while many others are still missing, in Europe, mainly in Germany where Chancellor Angela Merkel spoke of “tragedy”, at a time when many political leaders attribute the phenomenon to climate change.

As broadcast by APE BPE, at Belgium, the Luxembourg and Netherlands, the damages are many. But the situation is dramatic in West Germany, where authorities spoke at least tonight 59 dead and dozens of injured.

Many villages remain cut off from the rest of the world and there are fears that the final toll of the victims will be even heavier. Dozens of people are missing.

The state police Rhineland-North Westphalia announced tonight that another 5 bodies had been found, bringing the death toll to 31. In the neighboring Rhineland-Palatinate, 28 people have lost their lives.

«The death toll rises as the hours go by“, Said an official of the Ministry of Interior of North Rhine-Westphalia.

These floods are one of the worst natural disasters in post-war Germany. Many towns and villages have flooded from the waters of the rivers that overflowed after the rains, dragging cars in their path, destroying houses and forcing the inhabitants to seek shelter on the roofs to escape.

In areas where the waters began to recede, still shocked residents began to inspect what is left from their homes and neighborhoods.

In town Suld, from the houses only broken beams and piles of rubble remained. Roads are blocked by debris and fallen trees while fish literally splash in the ponds that have formed in the middle of the road.

“It rained constantly for two or three days. “Maybe four, I lost count,” said Klaus Randermacher, who has lived in Suld for 60 years. “I saw the pizzeria flooding, half an hour later the oven also flooded. There is a campsite over there and caravans and tents began to pass through here, gas cylinders floating on the water. We were helpless, it happened so fast. “I have never seen anything like it,” he added.

In the wine-producing area Arvailer, in the Rhineland-Palatinate, the river Ar overflowed and the waters destroyed at least six houses. Residents used snow shovels and brooms to remove mud from their homes and shops.

“I was surprised. I had thought that one day the water might get here, but it did not. This is not a war – nature is just counterattacking. “Finally, we have to start paying attention to it,” commented one resident, Michael Achred.

At least 15 are dead in Euskirchen, south of Bonn. Authorities urged residents to evacuate their homes and special crews were pumping water from a dam south of Euskirchen, fearing it might break.

Floods were also reported in Cologne and Hagen while in Leverkusen 400 people were evacuated from a hospital. In the Wuppertal locals said the basements were flooded and their houses had no electricity. “I can not even guess how big the damage will be,” said Karl-Heinz Shaman, a nightclub owner.

Hundreds troops assist the police and fire brigade in the rescue operation in Germany. Chariots were deployed to clear the streets of mud and fallen trees, and helicopters rescued those trapped on rooftops.

About 200,000 households they stayed without electricity due to the flood.

In the Belgium, about 10 houses collapsed in Pepinster, after the waters of the river Wesndr flooded the city. More than 1,000 homes were evacuated. The rain also caused many problems in public transport. The high-speed Thalys routes from Belgium to Germany were canceled. Navigation on the Meusi River has also been suspended. Eight people lost their lives and four are missing. Among them is a 15-year-old girl who was swept away by the waters of a river.

In the neighborhood Netherlands, the waters caused extensive damage to homes in the province of Limburg, where many nursing homes were evacuated.

Coronavirus: Cases on the rise worldwide – More than 500,000 on Tuesday and Wednesday

USA: At least 2,000 homes are threatened by a huge fire in Oregon