AUD/USD Price Analysis: Remains bearish near 0.7075-80 but remains above the 23.6% Fibonacci level

The pair AUD/USD came under some selling pressure on Tuesday and pulled back from two-week highs around the 0.7125 area hit the day before. The pair remained depressed throughout the first North American session and was last seen around the 0.7075-0.7080 area, just a few pips above the daily low.

The worsening global economic outlook continued to weigh on investor sentiment and triggered a new wave of risk aversion. This was reflected in a generally weaker tone around equity markets, which, in turn, undermined the riskier perception of the Aussie, although modest US dollar weakness helped limit deeper losses.

From a technical point of view, the AUD/USD has so far managed to hold above the 23.6% Fibonacci retracement of the recent 0.6829-0.7128 recovery move. This is closely followed by a confluence comprising an uptrend line extending from the yearly low touched earlier this month and the 100 hourly SMA.

The technical setup warrants some caution before confirming that the recent positive move of the last two weeks has been exhausted and before placing bearish bets. Furthermore, the neutral oscillators on the hourly/daily charts have not supported any strong short-term directions, warranting caution for aggressive traders.

Therefore, sustained weakness below the mentioned confluence around 0.7050 is needed to support prospects for further losses. The AUD/USD pair could then accelerate the decline towards the 38.2% Fibonacci level, around the 0.7015 region, en route to the key psychological 0.7000 level and the 50% Fibonacci level support near the 0 zone, 6980.

On the other hand, the round 0.7100 level seems to be an immediate hurdle ahead of the overnight high around the 0.7125 area. Some follow-up buying would be seen as a new trigger for the bulls and pave the way towards the 0.7200 round figure, with some intermediate resistance near the 0.7170 region. 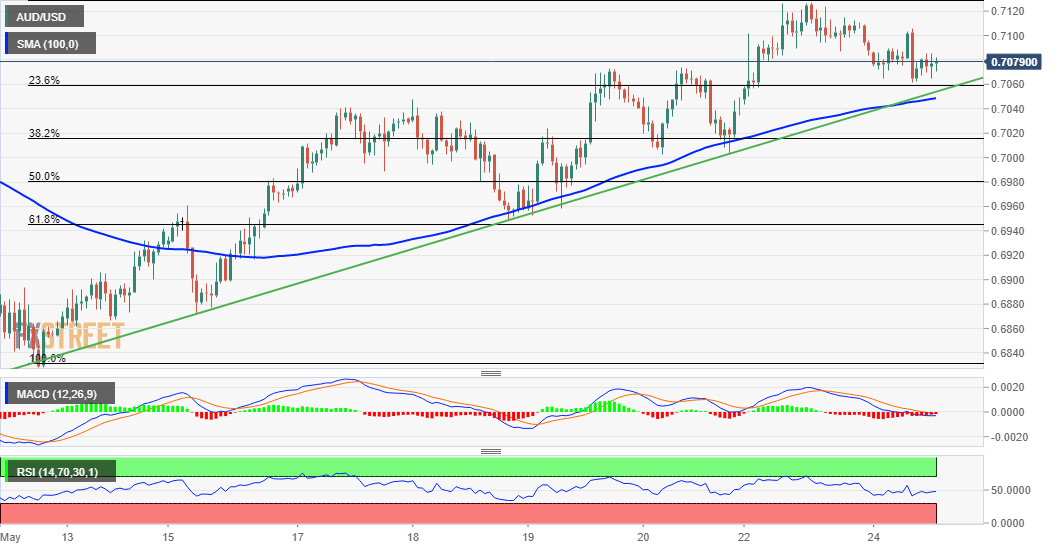 Wall: With a positive reaction 1% entered the second half…

USD/CHF Price Analysis: Buyers step in and lift pair on…

Toyota to cut global production plan by 100,000 vehicles in June

AUD/USD recovers the 0.6800 level although remains under pressure in a mixed…

Gold Forecast: XAU/USD bounces back above $1,800 from a five-month low

EUR/USD falls below 1.0400 after disappointing US ISM