The AUD/USD bounces back after falling to two-week lows around 0.6850, reclaiming the 0.6900 level, gaining almost 0.60% on Thursday, after US inflation shows some signs of outperforming. At the time of writing, the AUD/USD is trading at 0.6910 during the American session.

Financial markets have been affected by a climate of risk aversion on the last day of the first half of 2022. US equities extend their losses and the USD falls, as shown by the US dollar index, which plunges 0.39% . Meanwhile, 10-year US Treasury yields plummet below the 3% threshold as recession fears mount, as illustrated by the Atlanta Fed’s GDPNow for the second quarter, which it plummets towards -1.0%.

The US calendar has released inflation figures, which show that inflation is slowing down. The personal consumption expenditure (PCE) price index for May rose 6.3% yoy, less than expected, while core PCE, the Fed’s favorite reading for inflation, rose 4.7% yoy, less than expected. estimated, reported the US Bureau of Economic Analysis. Although a good sign for the US economy, the same report highlighted that US consumers spent less in May, for the first time in 2022, and that previous figures were revised to down, indicating that the economy is not as strong as previously thought.

At the same time, the US Department of Labor released initial jobless claims for the week ending June 25, which topped the expected 228,000, and increased by 231,000.

Meanwhile, Federal Reserve Chairman Jerome Powell crossed wires. He stated that it is the job of policymakers to find price stability, even during the new forces of inflation, while adding that the US economy is strong and can withstand monetary policy tightening.

AUD/USD remains in a downtrend, although modestly consolidating in the 0.6850-0.6950 range. Further confirmation of the above is the location and slope of the Relative Strength Index (RSI), although, on negative readings, it is almost horizontal. However, the major’s price action on Thursday is rising strongly, and a break above the June 30 high at 0.6920 could open the door for further gains, but the solid resistance near 0.7000 will be difficult to break. Conversely, a continuation to the downside is on the cards, though it would pick up speed once sellers reclaim 0.6850, which will see the pair drop towards a year low near 0.6828, followed by 0.6800. 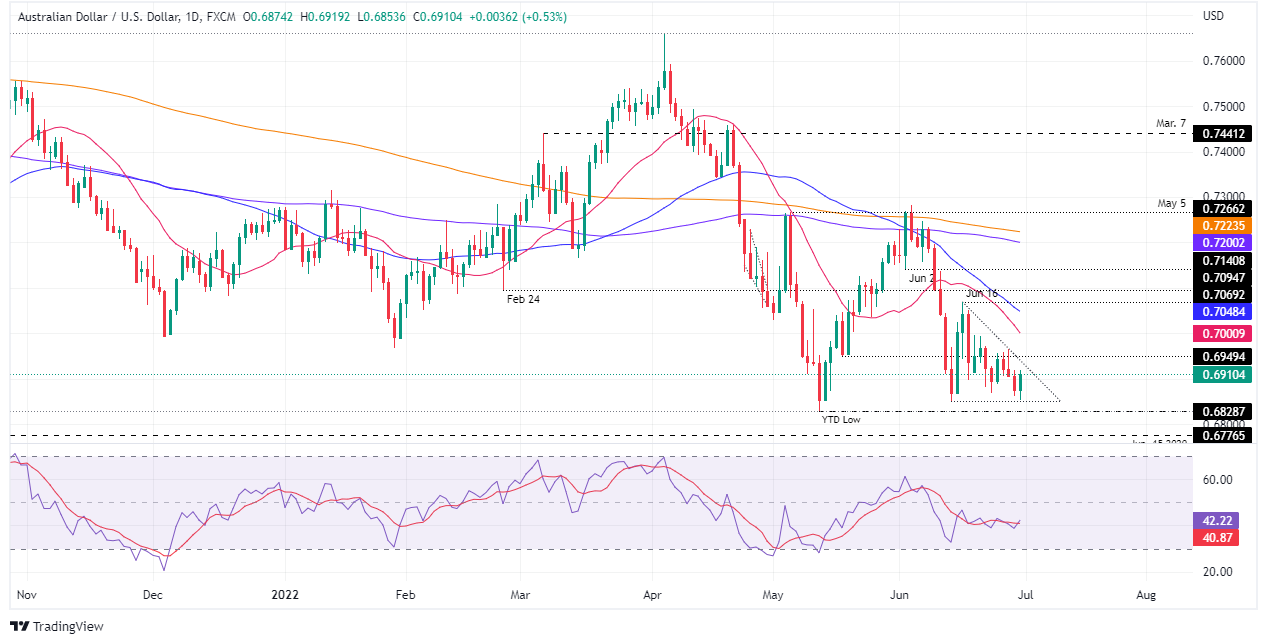