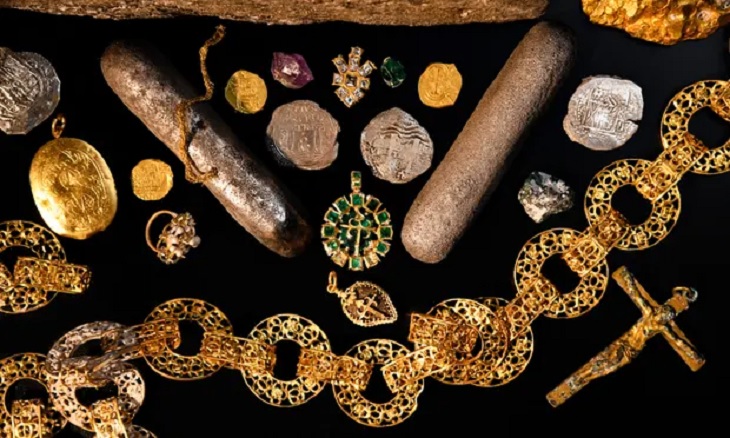 A hoard of gold coins, gems and jewels was recently discovered in a Spanish shipwreck at Bahamas which occurred 366 years ago.

In an effort to preserve what’s left of the ship and its precious cargo, an international team of conservators and underwater archaeologists is working to recover artifacts from the wreck, which lies in the Atlantic Ocean about 70 kilometers off the coast of the Bahamas .

Known as Nuestra Señora de las Maravillas (“Our Lady of Miracles” in Spanish), the galleon of 891 tons was traveling from Spain to Colombia in 1656 to pick up a cargo of silver when it collided with another vessel of the Spanish fleet.

The accident forced the ship to run aground on a coral reef and an estimated 600 of the 650 on board lost their lives. More than three centuries later, the wreckage is spread over an area of ​​13 km on the ocean floor.

Because historians often regard the Maravillas as “one of the great Spanish treasure galleys,” the wreck has become a target for looters. The vast majority of the treasure – about 3.5 million objects – was looted between 1656 and the early 1990s, according to Maritime Museum in the Bahamas.

In accordance with livescience.com to help protect the remaining artifacts, Allen Exploration (AllenX), an organization that specializes in finding historic shipwrecks, has partnered with the Bahamian government to recover what’s left of the ship and its cargo.

Over the past two years, Allen and his team have managed to recover a number of items from the wreck, including the last remnants of the ship itself: a stone ballast, iron links that once held the hull together and a nut from a bronze navigational instrument called an astrolabe.

Other finds include items used by the crew, such as One of the gold lockets features a large, oval Colombian emerald and twelve smaller emeralds, which may represent the twelve Apostles, along with a heraldic motif known as the Cross of St. James.

But perhaps most exciting of all the finds is the precious cargo the Maravillas carried: a treasure with silver and gold coins, emeralds, amethysts and a 34 kg silver bar.

Many of the items recovered from the wreck will be displayed in a permanent collection at the Bahamas Maritime Museum.

vases from Spain, dishes from China and Mexico, as well as personal items including a silver sword hilt, a pearl ring, wine bottles and four medallions worn by knights of the Order of Santiago, a Spanish and Portuguese religious and military order of the 12th century.

- Advertisement -
Share
Facebook
Twitter
Pinterest
WhatsApp
Previous articlePetro denies meeting with Maduro, but is already working on normalizing relations with Venezuela
Next articleJoe Biden: Signed and ratified the approval of the admission of Sweden and Finland to NATO