BNP Paribas: Greece’s prospects are encouraging – It is no longer the big fear in the eurozone

Although inflation will hamper Greek GDP growth in 2022, however, the Greek economy has proven resilient so far, notes BNP Paribas.

Unemployment is at its lowest rate since 2010 and GDP has rebounded strongly since the end of austerity measures in 2020. A recession is unlikely this year, especially as tourism prepares for a strong summer season, while on August 20, 2022 Greece will exit officially from the European Commission’s enhanced financial surveillance program, which it joined in June 2018.

Recently, the country also repaid the last of the IMF loans (€1.9 billion) contracted during the 2011 crisis. Eleven years later, Greece is taking another step towards normalizing its economic system, as it emphasizes the French bank.

In more detail, as highlighted in a new BNP report, Greece is one of the eurozone economies that recovered the fastest after the restrictions imposed due to Covid in 2020. After an 8% recovery in 2021, real GDP grew strongly again in a ‘ quarter of 2022, driven by private consumption and investment. At the end of the first quarter of 2022, GDP growth was around 2.5% higher than pre-pandemic levels, a rate three times higher than the Eurozone average.

At the same time, the unemployment rate fell to 12.5% ​​in April, the lowest level in 12 years, however, as BNP Paribas points out, it is important to consider that the working population has shrunk sharply since the outbreak of the global financial crisis in 2008/2009, especially with regard to young people.

Even so, according to the French bank, the Greek economy has proved resilient so far and recession risks appear to be more limited than in the rest of Europe. The country will likely benefit from a bumper summer tourist season, although those prospects could be somewhat marred by social unrest and labor shortages currently plaguing the airline industry. 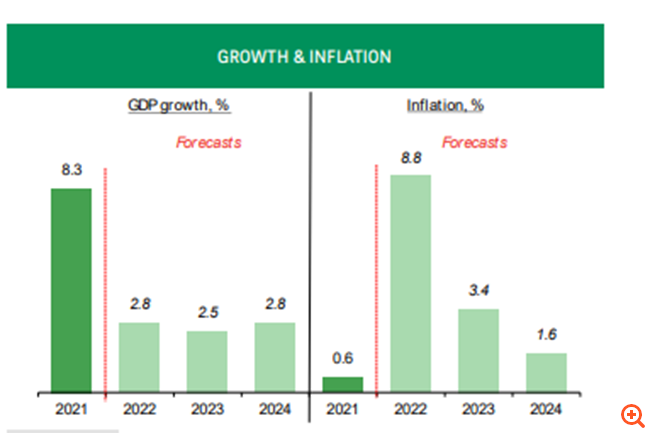 The main risk factors in the second half of 2022 center around the effects of monetary tightening in the Eurozone (and the resulting rise in bond yields) and inflation.

Inflation is rising rapidly, BNP Paribas notes, and energy prices are still by far the main driver behind this increase, while prices are also rising faster and more in food, hotel and restaurant services and household appliances .

Since a large portion of consumer products are imported, the country has been hit hardest by global price increases resulting from shortages and the disruption of international trade. The French bank points out that a further acceleration in inflation cannot be ruled out, as consumer prices rose sharply in the first half of 2022.

To strengthen support measures for households and businesses, the government plans to extend the reduction in the VAT rate for restaurant and transport services and to extend the abolition of the solidarity tax to the entire population in 2023. However, the room for fiscal maneuver government’s gap is too tight: OECD predicts primary deficit of 4.1% of GDP in 2022

Greece is no longer the focus of fear in the eurozone

Despite heightened concerns about a possible Eurozone fragmentation and a sharp rise in Greek government bond yields, Italy is the country at the center of concern, with some fundamentals now more favorable for Greece.

Although its public debt is higher than Italy’s, the Greek government has reduced its refinancing needs more strongly (22.4% of GDP in 2021, compared to 30.6% in Italy) and this gap will continue to widen according to with the forecasts of the European Commission

At the same time, Greece’s political situation also appears to be more stable than in Italy, where the coalition under Mario Draghi remains fragile. Greek Prime Minister Kyriakos Mitsotakis enjoys a comfortable parliamentary majority and his popularity is high.

Renewable sources should increase their presence in the energy matrix in 2022, says MME