Children of the 90s and 00s will shed tears – it has all the games! Anbernic RG552 Mini Console Review

You probably haven’t heard of Anbernic, and they’ve been making some interesting portable consoles for a few years now. Their devices are designed to run fresh retro games from different consoles through emulation and have proven to be a good assembly – the evolutionary path has been successfully completed.

fresh model Anbernic RG552 received support for two operating systems – a gaming-focused version of Linux and a full-fledged Android. And the performance is enough to emulate old games, and to run more or less recent projects for Android. That is, we have a portable console for gamers from different eras with very different tastes, which you can buy new here and now. Prices start from 15 thousand rubles, if we consider options with AliExpress. But let’s take a closer look at the Anbernic RG552 and see what it’s like in action.

There are quite a few similar retro handhelds on the market, and the Anbernic RG552 is much larger than the competition. Its dimensions are quite comparable with the Nintendo Switch Lite and only slightly fall short of the original Nintendo Switch with detachable Joy-Cons. The dimensions are due to a 5.36-inch screen with a resolution of 1920 × 1152 pixels. Don’t be put off by the non-standard 5:3 aspect ratio, it’s handy for older games, thanks to the ability to scale correctly with minimal black bars.

The screen is pleasing to the eye: the colors are saturated, the black depth is good for an LCD, and the viewing angles are maximum and even redundant for playing alone. Given the good aspect ratio and integer scaling, the quality of displaying retro content on the Anbernic RG552 is excellent. I will only complain about the responsiveness of the touchscreen.

As befits a gaming device, the physical gamepad is scattered around the body. First of all, a pair of symmetrical analog sticks with the ability to click on them (the style is reminiscent of the Nintendo Switch). Then, a responsive d-pad on the left and four buttons (XYAB) with interesting sponge feedback on the right. Buttons L1, R1, L2 and R2 are arranged in pairs in a line so that L2 and R2 turned out to be small and sometimes hard to reach. And finally, the Select key is above the D-pad, and Start is above the XYAB. Please note that all the buttons are matte, like the rest of the case, and the sticks are rubberized. Marked impractical gloss on the body is not. 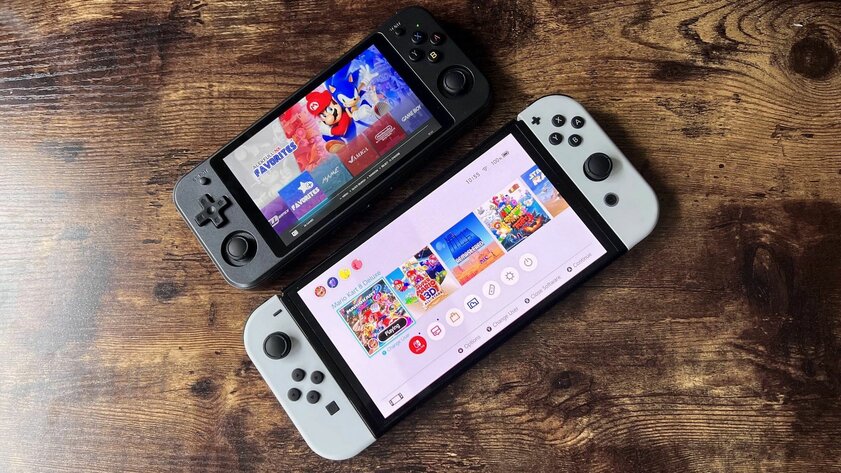 Our hero compared to the original Nintendo Switch

And that is not all. On the left is the volume rocker, on the right, symmetrically to it, is the power button. A couple of buttons below are much more interesting – Reset and F. The second – functional – can be reassigned and combined with other buttons, creating combinations in emulators. But the solution is not very practical, confusing it with a nearby Reset and accidentally resetting the game is too easy. 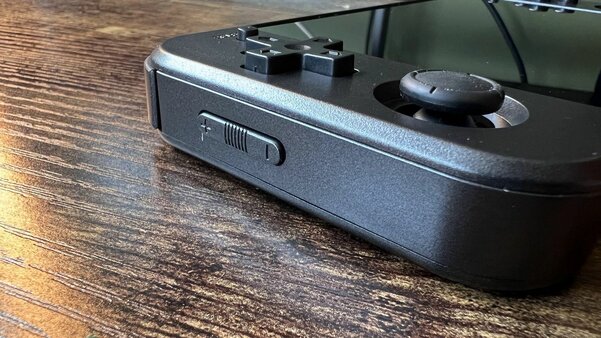 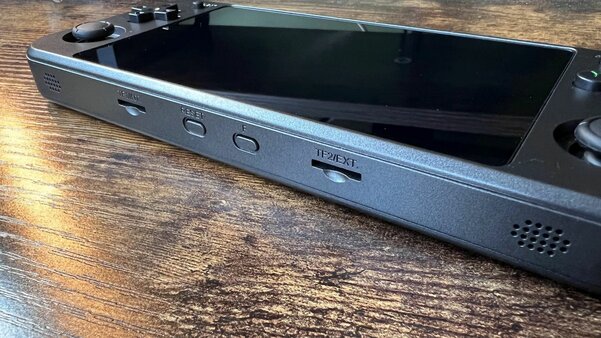 A significant contribution to the experience of the gameplay, in addition to the screen and the gamepad, is made by sound and vibration feedback. The stereo is loud and clear, and the speakers are located on the bottom end and are guaranteed not to overlap with your fingers. A couple of good motors on the left and right are responsible for the vibration. However, you should not expect a response similar to the PlayStation 5, Anbernic RG552 is more like a regular smartphone.

The set of connectors is no less diverse, it seems that everything is here. Above – two USB-C (one for charging, the second for peripherals, the same external gamepads), miniHDMI as a video output and a 3.5 mm audio jack.

The dimensions are rather large, and the weight is 350 grams, so the RG552 cannot be considered a pocket gadget. Inside your bag or backpack, you will need a separate safe place so as not to damage the joysticks. This format has positive and negative sides. On the one hand, the large and elongated screen is perfect for playing games with the PSP and Game Boy Advance. On the other hand, this complicates the control – it is inconvenient to control the stick and press the triggers from above at the same time. Probably, with the increase in dimensions, Anbernic should have reconsidered the design of triggers – turn the L2 / R2 into triggers and mark them by analogy with the Nintendo Switch. 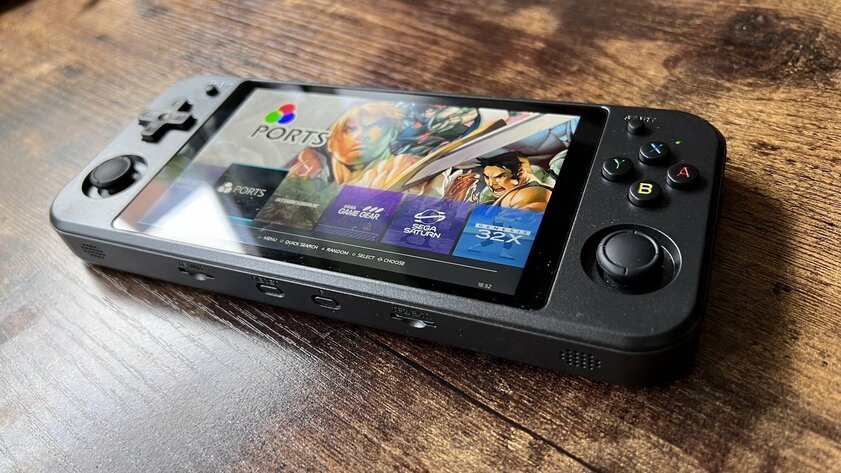 Inside there is a little trick – two operating systems. Game-oriented Linux Batocera and quite ordinary Android 7.1.1 Nougat with a pack of pre-installed emulators. The choice of operating system is not carried out at boot time, but in a somewhat strange way – by pulling out a second 16 GB microSD. Yes, yes, Android has 64 GB of internal memory, the first 16 GB microSD with deployed Linux and the second microSD up to 512 GB for games, multimedia and other user data. 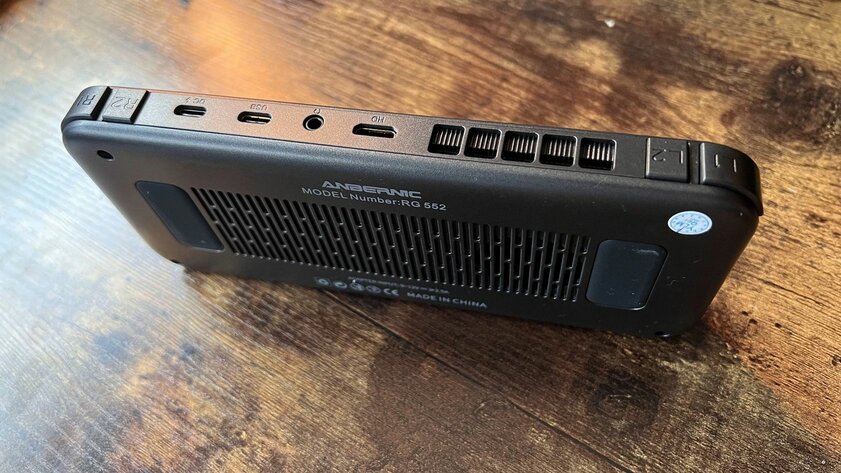 The installed distribution of Linux Batocera is sharpened for retro gaming and designed accordingly. Inside it is installed RetroArch with various emulators. There are no games initially, their images with the corresponding metadata must be searched for and sorted into folders on the SD card. And the system itself is easily customizable both externally and functionally. 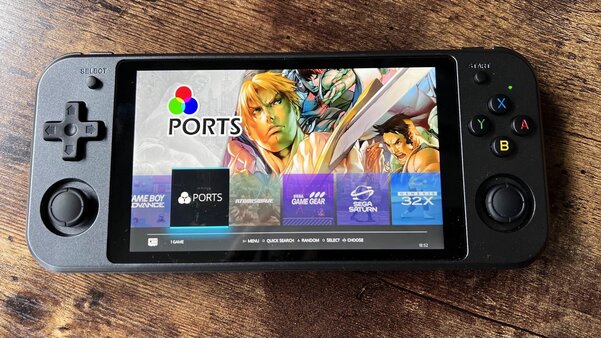 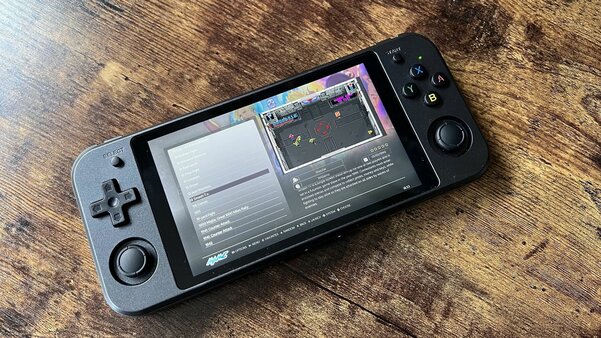 The Android side is less charming. Firstly, version 7.1.1 of Nougat is outdated a long time ago, and secondly, not the most suitable ATV shell is installed by default. The last point is correct, there are nice shells on Google Play that collect all games with meta information, for example, Dig or Reset Collection. After all, Android in this case is just a launcher for games and emulators, and it does a pretty good job of that. 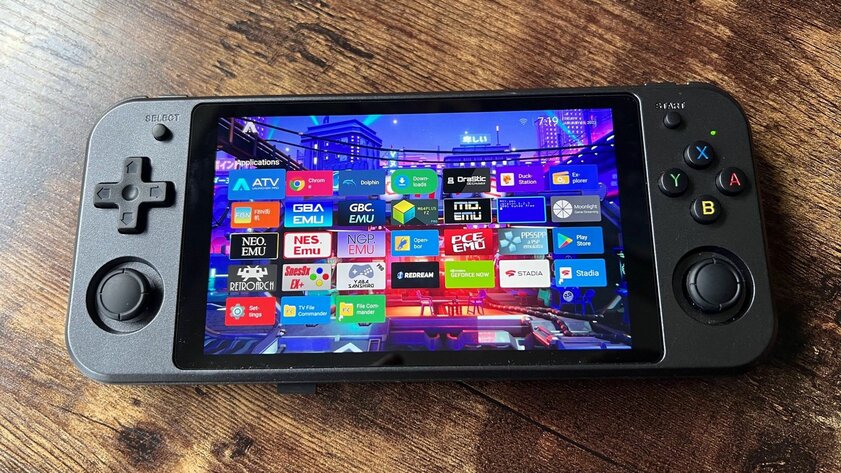 The set-top box is based on a six-core RockChip RK3399 with 2 Cortex-A72 cores (1.8 GHz) and 4 Cortex-A53 cores (1.4 GHz). Responsible for the graphics Mali-T860 MP4 at a frequency of 600 MHz. To consistently squeeze the maximum out of the RK3399, the device was equipped with an active fan. It draws air through the case from the back cover to the top end to avoid throttling – a decrease in performance due to overheating. The noise from the fan is negligible, and the draft is quite felt by the fingers touching the ventilation holes on the back cover.

The chip is old and does not seem productive, but it is enough to emulate home consoles from the late nineties: PlayStation 1 and Nintendo 64 (fifth generation), as well as Dreamcast (sixth generation). These and older (8-bit and 16-bit) consoles work perfectly with additional graphics patches (like running the PS1 in 16:9 wide without stretching). PSP emulation is possible, but not always at 30fps. The Android gaming experience can be ruined by a wayward touchscreen. While my favorite Grand Theft Auto trilogy, sister Bully and the first Max Payne work well. 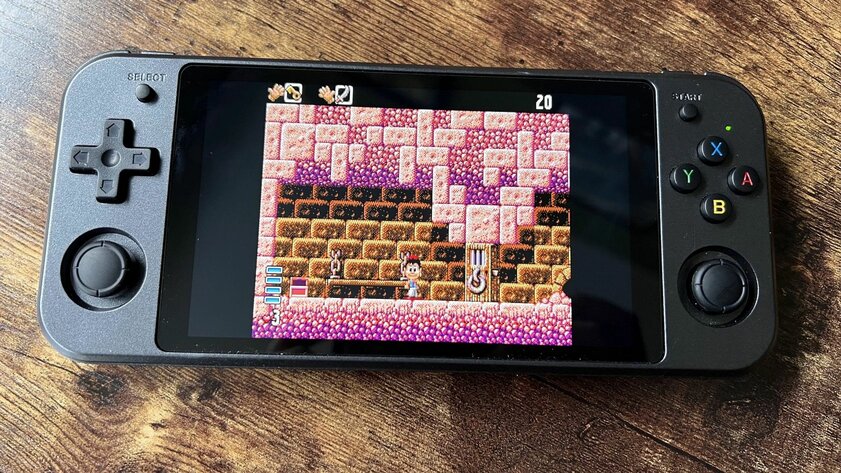 Other similar modern handhelds are starting to delve into Gamecube and PS2 emulation, but neither is completely out of reach for the RG552. It turns out that our heroine provides approximately the same capabilities as the old PS Vita after the modification. There is a separate detailed material about its capabilities, I recommend that you read it. 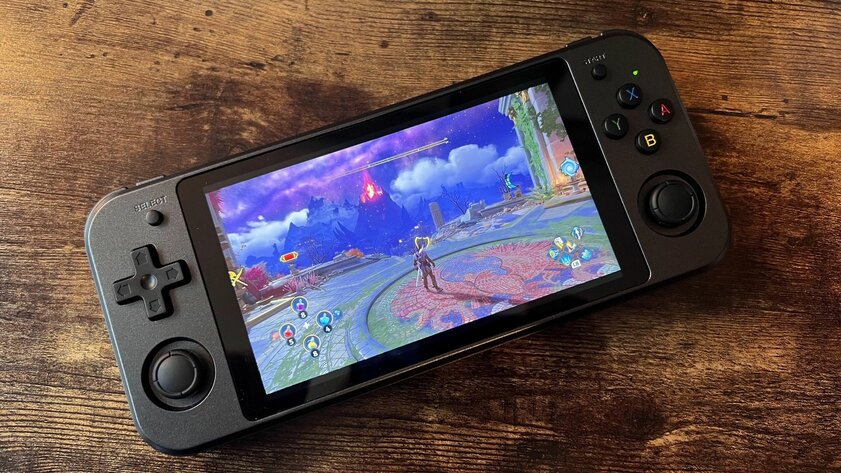 As for streaming video games online through the same Stadia or sharing over a local network through Moonlight, it’s all real. But the available 2.4 GHz Wi-Fi may lack bandwidth, and 5 GHz Wi-Fi is not here. 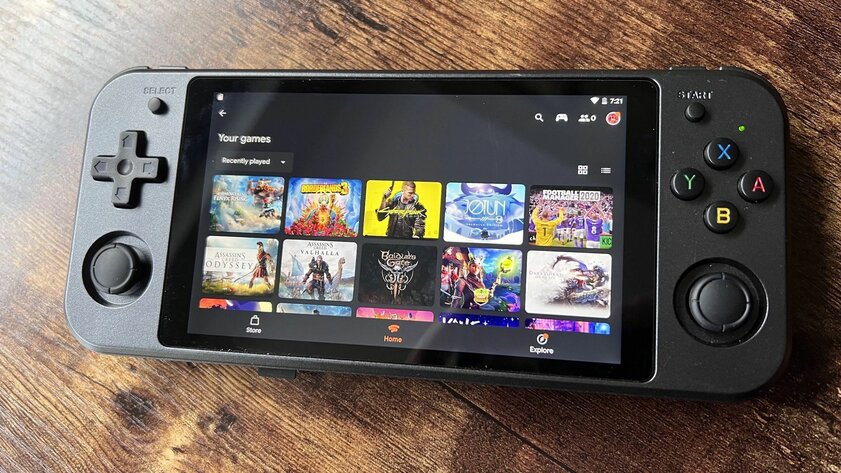 Also puzzling is the lack of Bluetooth, which makes it impossible to connect either wireless headphones or a Bluetooth gamepad to the set-top box. So, to use the RG552 as a set-top box, you will have to look for a wireless gamepad with a USB connection. After all, the rest of the miniHDMI output works great.

Two batteries with a total capacity of 6400 mAh are installed inside. In reality, you can expect 5 hours with 2D game emulation and about 3 hours if you play demanding 3D projects. It takes about 1.5 hours to fully charge, a quick adapter is included. And the console itself is compatible with Qualcomm Quick Charge, Power Delivery, and even Samsung Adaptive Fast Charging.

If you have never tried similar handhelds designed for retro games through emulators, Anbernic RG552 will be a pleasant discovery for you. This is a merit of high-quality assembly and serious flexibility of the two operating systems, which opens up access to the hits of five generations of consoles. Although you still need to be an enthusiast to get a good experience, as the console requires some skill in finalizing the software. 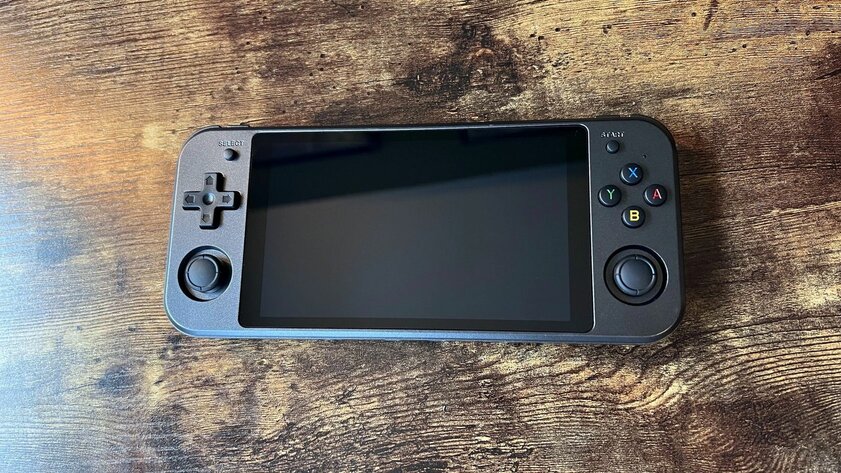 However, the final price-performance ratio is a little disappointing. Indeed, in this case, one cannot count on more than PS1, Nintendo 64 and Dreamcast. And for 15 thousand rubles, you don’t want to face the lack of Bluetooth and a problematic touchscreen, which prevents you from enjoying Android games sharpened for touch control.

Oddly enough, the competition among handheld retro games is high. Firstly, there are many Chinese portables with comparable capabilities, and they are produced in a variety of formats. Secondly, there is an old PS Vita with almost exactly the same set of emulators and a unique library of AAA projects of its own. And finally, there are more serious modern devices: for about the same money, you can try to find Ayn Odin based on the much more productive Qualcomm Snapdragon 845, capable of emulating the PlayStation 2. And if you remember the Nintendo Switch secondary market? That is why the final attitude towards the Anbernic RG552 is too ambiguous to recommend it for purchase.

This is a translation of the TechRadar review.

- Advertisement -
Share
Facebook
Twitter
Pinterest
WhatsApp
Previous articlePaola Turci and Francesca Pascale are now married: but in Italy there is no egalitarian marriage
Next articleBestBrokers: DeFi market has become the most attractive target for hackers