Citi: The ‘winners’ and ‘losers’ of the European Energy solution – Greece in the worst position

Greece, together with the Netherlands and Italy, are the countries that are most vulnerable – both on the fiscal front and on the energy front – and will benefit the least from EU support measures for the energy market, Citigroup estimates in today’s analysis.

There are three main questions that have arisen regarding the energy market, following the statements of the President of the Commission on future interventions, notes Citi, the following:

– After the price cut, is Europe out of danger?

– What is the likely outcome of the EU’s plan to pay for the energy price cap?

– And which countries will benefit?

Citi believes that the danger to Europe still existsa combination of green subsidies and NGEU funding could help, but within the Eurozone, the Netherlands, Italy and Greece appear particularly vulnerable.

Regarding the first question, Citi points out that natural gas prices have fallen recently, while European storage levels reached the 80% target two months ahead of schedule. While encouraging, the issue is that Europe has procured this storage at incredibly high prices and the global gas market remains very tight.

Prices have been extremely volatile and two of the key elements – the weather and Russian energy flows – are also highly uncertain. Meanwhile, the euro has struggled to make a significant run against the dollar during recent gas spikes. All this brings anything but excitement, with the danger for Europe remaining.

All eyes are on the September 14 announcement by Commission chief Ursula von der Leyen on how the EU plans to cap electricity prices for consumers.

The energy ministers meet on the 9th of the month so there will be some relevant news sooner. If a decisive and coherent plan emerges from the EU (perhaps similar to the NGEU in June 2020), then there could be significant upside for the euro. In equities, cyclical sectors will record a strong relief rally, while a rally in Eurozone bonds is also likely. However, as Citi points out, European politicians have… a history of disappointing the market.

As for the possible solutions that exist to support the energy market, Citi economists see four main options:

1) Italian proposal – buyer cartel: The EU will tell gas sellers that there is a ceiling it is willing to pay. According to Citi, this seems highly unlikely. It would require Russia to be open to such a deal and would still face competition from Asian LNG buyers willing to pay higher prices on the open market.

2) Greece’s proposal – To divide the electricity market into two baskets, fossil fuels and green energy. This is difficult to implement without quantitative caps and massive structural restructuring of the current marginal pricing mechanism, Citi points out. End-users would first use up the cheapest supplies of green energy, and then prices would increase in the more expensive basket. Quantitative restrictions – a price with a mixed price of the two baskets – could work, but at the European level they would essentially amount to subsidizing high-gas-using countries from low-gas-using countries.

3) The “Iberian exception” – Green energy replaces gas price cap: Spain and Portugal effectively reduce the domestic price of natural gas in electricity auctions using profits from the renewable energy sector. There are some economists in core Europe who oppose effectively subsidizing the minerals sector, which may make it politically difficult to implement. However, assuming this could be extended across the EU, the initiative will only really work for countries with large renewable/nuclear sectors that can offset carbon.

4) Financial solution: For those without large non-mineral sectors, the onus could then fall on individual states to fill the gap or redirect NGEU funds. Either way, an announcement about this kind of solution seems most bullish for the euro, according to Citi.

Who benefits? Greece is vulnerable

Citi believes that a combination of options 3) and 4) is likely in some form. So the countries that will benefit will, in theory, be those with a low dependence of electricity on natural gas relative to renewables and nuclear, with low energy inflation and fiscal space for cap spending.

The US bank created a scorecard of these factors and concluded that Norway, Sweden, Austria and France appear least vulnerable to this solution, while Belgium, Italy, the UK and Greece are the most exposed .

Greece in particular has the highest “sensitivity” in terms of fiscal and energy market structure (the highest score) among all countries, based on Citi’s measurements of electricity dependence on natural gas and RES, energy inflation, the debt-to-GDP ratio and the budget balance, as shown in the table below. The last two actually suggest that it does not have the fiscal space to actually benefit from the EU plan: 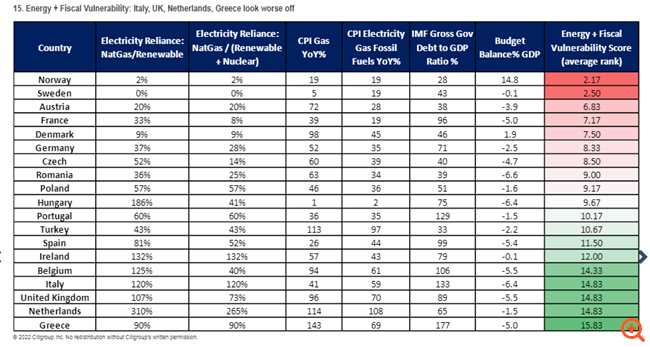