Proven: Application developed with funding from Google reproduces checks, offers tips to prevent the spread of misinformation, opens a channel with the project and will encourage users to do their own image checks. 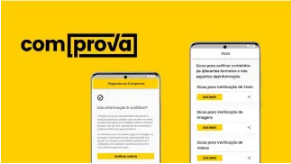 The first version of the application is now available on Google Play Store and on Apple Store. With it, citizens will be able to follow the verifications published by the project, send suggestions of suspicious content for verification and learn techniques for identifying misleading or false content disseminated through social networks. The second version, which will be available in up to two weeks, will allow users to do some image investigations with a search feature offered by the app. The idea is that teachers can also use this functionality to guide checking exercises with Media Education classes.

For the president of Abraji, Katia Brembatti, is yet another initiative that shows how we are seeking all channels to reach more and more people. “Fighting disinformation requires efforts on several fronts. The app is a way of being present on cell phones,” he says.

The application was developed by Vórtigo and was supported and financed by Google Brazil. “The app represents yet another success in the history of the partnership we have with Comprova and comes at a very important moment in the country,” he says. Marco Tulio Pires, one of the coordinators of the Google News Initiative in Brazil. “Through it, Brazilians will now be able to access checked content about the elections directly on their cell phone screen.” 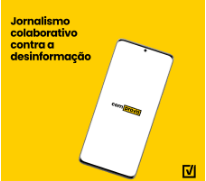 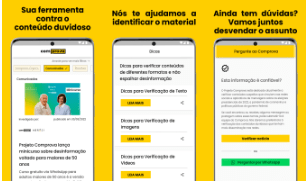 Projeto Comprova is a coalition of media outlets formed in 2018 to investigate the veracity of suspicious content about the presidential elections disseminated on social networks, messaging apps and hyperpartisan websites. Since then, Comprova has published more than 800 investigative reports and its professionals have trained more than 5,000 journalists and journalism students. In 2022, 43 media organizations from all regions of Brazil participate in the project. They are news sites, radios, TVs and newspapers that work collaboratively to minimize the effects of misinformation about the pandemic and the presidential elections.

Media education is one of Comprova’s commitments and the project joins several Brazilian initiatives that work to bring knowledge to Brazilian citizens so that they can critically analyze the media and its products and know how to deal with disinformation. One of the objectives of the application is to provide didactic support to teachers who develop media education projects in schools.