“Hellenic Petroleum” characterizes 2021 as a milestone year, announcing its results for the year, noting that the corporate restructuring and the modernization of the governance framework have been completed, while the implementation of Vision 2025 is proceeding smoothly.

The company saw an improvement in results due to increased production and exports, with total sales of petroleum products reaching 15.2 million tons, while € 341 million reached the Published Net Profit for the whole year.

The investments amounted to over € 400 million in 2021, with emphasis on new energy, environmental upgrade and safety projects, while the construction of the 204 MW PV park in Kozani was completed.

The Board of ELPE decided to distribute a dividend of € 0.40 / share, while 50% of the proceeds from the sale of DEPA Infrastructure will be allocated to an extraordinary dividend.

In more detail, the company states:

The improvement in the results was achieved in a weak environment of demand and margins in the first half of the year and the global energy crisis in the second half, and is mainly a result of increased production and exports of refined products and overall good performance in foreign subsidiaries. Production and sales of petroleum products increased to 14.4 million tons (+ 4%) and 15.2 million tons (+ 6%) respectively, with exports marking the second highest performance in the history of the Group. The Petrochemicals sector took advantage of the improved international environment and recorded a record high profitability of € 131 million, while trading companies in Greece and abroad significantly improved their contribution, as markets recovered gradually, despite rising operating costs.

Published Net Profit in 2021 amounted to € 341 million, the second highest performance in the history of the Group, reversing last year’s losses of € 397 million, as international crude prices recovered significantly, from historical lows recorded in 2020. 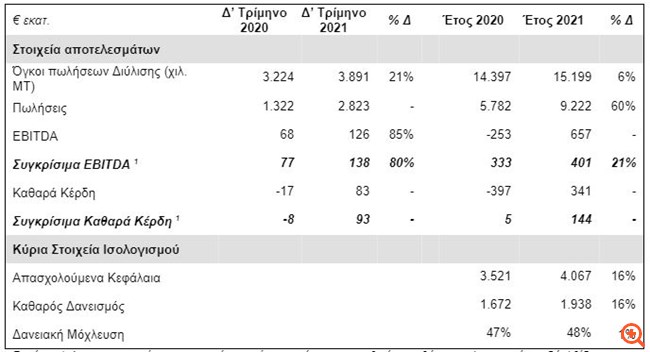 The Board of Directors, taking into account the results, but also the prospects of the Group, decided to distribute a dividend of € 0.40 / share, of which € 0.30 / share will be distributed in April and € 0.1 / share after the General Assembly.

During the year, the Group proceeded to the formulation and implementation of its new strategy, “Vision 2025”, an ambitious plan that aimed to improve the operation of the Group, but also to change the strategic direction towards green energy.

The corporate governance framework has been significantly upgraded, with the majority of the Board members being elected by the General Assembly, with the increase of independent members and the introduction of a policy of suitability and quota by gender, in full alignment with Law 4706/2020, incorporating at the same time improved practices at European level.

In addition, on January 3, 2022, the corporate restructuring was successfully completed, with the separation of the activities of Refining, Supply and Trading of Petroleum and Petrochemicals and their contribution to a new company, 100% subsidiary of HELLENIC PETROLEUM, which was renamed “ELIA”. Ε. “.

In 2021, the implementation of the Group’s investment program was accelerated with investments of € 400 million and an emphasis on green transition projects, where almost 60% of the total investments of the year were directed. Specifically, the construction of the 204 MW PV park in Kozani was completed, with the connection and operation expected within the 1st Quarter 2022. In addition, during the Fourth Quarter, the Group proceeded with the acquisition of wind works in operation of total installed capacity. 38MW, with a very high capacity, while within the first quarter the acquisition of 16MW PV projects in operation was completed. The above will allow the achievement of the target of 300MW of installed capacity in operation in early 2022, earlier than the initial target.

Crude price recovery to the highest levels since 2014, strengthening of international refining margins

International crude prices rose in 2021, marking an upward trend during the year, after the multi-year lows of 2020, due to the recovery of economic activity, the reduction of restrictive measures to address COVID-19, as well as the normalization of travel activity . Rising demand, coupled with a proportionally smaller increase in supply from major oil-producing countries worldwide, has led to rising prices. Thus, Brent prices reached $ 80 / bbl in the fourth quarter of 2021, the highest in the last seven years, compared to $ 44 / bbl in the fourth quarter of 2020. Prices showed a similar picture for the whole year, with the price of Brent to be around $ 71 / bbl on average, up 68% from 2020.

The dollar strengthened, with its exchange rate against the euro in the fourth quarter hovering at the highest levels since the beginning of 2018 at 1.14, while for the whole of 2021 the euro hovered at 1.18 dollars (1.14 in 2020).

In the Fourth Quarter, the diesel margin recovered to a two-year high. As a result, Hydrocracking Indicator refining margins improved on the previous quarter to $ 5 / bbl, with FCC refineries marginally $ 5.2 / bbl.

Total domestic fuel market demand for 2021 increased by 1.5% to 6.4 million tonnes, as motor fuel consumption increased by 6.6% in 2021, as a result of the removal of travel restrictions, while heating oil fell 17% due to milder weather conditions. The duty-free market recorded a significant increase in demand, with aviation fuel showing an increase of 90% due to the increase in tourist traffic and maritime fuel to 7.2%, due to the increase of coastal shipping activity.

During the Fourth Quarter, the Group repaid the Eurobond amounting to € 201 million at an interest rate of 4.875%, with a significant positive impact on financial expenses, which amounted to € 23 million, reduced by 13%. In total for the year they amounted to € 96 million (-8%), having recorded a decrease of more than 50% in the last 5 years. Net Lending stood at € 1.9 billion, with a Leverage Rate of 48%.

Commenting on the results o CEO of HELLENIC PETROLEUM, Andreas Siamisishe pointed out: “2021 was a milestone year for ELPE, we have made very important cuts that redefine our strategy and the transformation into a greener energy group. Through a comprehensive program, Vision 2025, the modernization of the governance framework and The successful completion of the corporate restructuring and the change of strategic emphasis on the development of green energy were universally accepted by all the market shareholders, bondholders and creditors, as well as support from our executives.Through this program the Group will continue to play a leading role in the energy market, with the central goal of improving our environmental footprint by 50% by 2030 and the gradual energy transition to greener forms of energy and more environmentally friendly fuels.

In this context, with total investments for 2021 amounting to € 400 million, of which 60% concern green energy development, while another 10% relate to environmental upgrading and safety projects at our facilities, we are rapidly implementing this Already, the fact that in the last year we have formed a portfolio of 0.3GW RES in operation, of which 0.2 GW were recently completed and is the largest investment in RES in our country, shows that the Group has the ability to move quickly and dynamics in this area.

In terms of results, the improvement of our operational performance and profitability, with increased production and exports, in a difficult international environment, is also a result of the continuous effort to improve competitiveness. Great emphasis has been placed on issues of digital transformation where a long-term ambitious plan is underway, on issues of organizational flexibility and commercial development outside Greece. The above allow us to distribute a dividend totaling € 0.40 / share, while, as we had committed, 50% of the expected revenue from the sale of DEPA Infrastructure will be allocated for the payment of an extraordinary dividend within 2022.

Finally, in addition to the strategy and results, special attention has been paid to issues of environment and social contribution, through a series of targeted actions mainly in local communities, but also one of the largest private environmental protection and rehabilitation programs in areas affected by recent fires of 2021.

All the above achievements were realized with a significant effort by all the employees in the Group, who successfully met all the challenges and I would like to thank them for their substantial contribution “.

Significant gains in the Euromarkets with ‘air’ from the US