The improvement of the international environment, the global demand and the domestic market was decisive for the recovery of the results of Hellenic Petroleum, despite the energy crisis which had a significant negative impact on the operating costs of the industry internationally.

At the same time, the group achieved a new balance sheet improvement with a reduction in financing costs and it is characteristic that the Eurobond amounting to 201 million euros was repaid from the cash.

At the same time, the strategic transformation of the group is progressing rapidly, while in terms of investments, the construction of the 204MW photovoltaic park in Kozani, which has been completed at a rate of 75%, is nearing completion.

Commenting on the results, the CEO of Hellenic Petroleum Andreas Siamisis said that “they have improved at almost all levels compared to last year as a result of a better environment, but even more promising is the continuous and steady improvements in areas that we can control as a company, such as the availability of refineries, our commercial performance in Greece and abroad and cost management ”.

More specifically, as announced by the Hellenic Petroleum Group, the main factors shaping the results were to a large extent the recovery of demand for petroleum products in all markets in which we operate and the strengthening of international refining margins, after many quarters fluctuating at historic lows. Respectively, the very good operational performance of the refineries and commercial companies in Greece and abroad had a positive effect, as well as the first results from the strategic transformation programs. A significant part of the operational improvement was offset by the surge in energy costs and CO2 rights, which is now one of the most important challenges for industries in Greece, but also internationally.

The Refining, Supply and Trade sector significantly strengthened its contribution to the highest levels of the last 5 quarters, mainly due to the increased availability of units and the improvement of the international environment. In addition, fuel demand in Greece continued to grow, with sales in the domestic market corresponding to 50% of the total, the highest percentage since 2019. The above positive results were mitigated by the significant burden of variable operating costs, due to the large increase international gas prices, at multi-year highs, which dragged down both electricity and emission rights.

The petrochemical industry continues to show particularly high results, as the demand for these products exceeds the current supply. Enhanced profitability and increase of market shares were recorded by the Group’s subsidiaries in the Retail Trade both in Greece and abroad, where in the last two years a plan for expansion and upgrade of the service station networks has been implemented.

Affiliates in the Electricity and Gas sector had another quarter of improved performance, mainly due to high electricity demand.

The IFRS Announced Results were further strengthened, due to the continuous increase of crude and commodity prices, forming the EBITDA Announced Profits for the Nine Months at € 531 million and the corresponding Net Profits at € 258 million.

The process of restructuring the corporate structure of the Group continues, with the BoD. of the Company to approve on September 30, 2021 the Decomposition Plan, for contribution of all operational activities of Refining, Supply and Trading of petroleum and petrochemicals to the new company. The plan is expected to be submitted for approval by the General Meeting of Shareholders in December and it is estimated that the implementation will be completed in early 2022. The new corporate structure will have multiple benefits in terms of flexibility for the development of new activities and their financing, risk management, as well as highlighting the value of the different portfolios of the Group activities.

The 204 MW PV power park in Kozani is in the final stage of completion of mechanical works, with 14 of the 18 parks – corresponding to 166 MW – have already been completed, while the connection to the high voltage system is expected, which will allow commercial operation within the first quarter of 2022.

Regarding the sale process of DEPA Infrastructure (65% HRDH – 35% HELLENIC PETROLEUM), in which the Group participated as a joint seller with HRDH, Italgas was declared the preferred investor, with an offer of € 733 million. € 256 million for the participation of HELLENIC PETROLEUM. The share purchase agreement is expected to be signed in the near future, after receiving the approval from the Court of Auditors, while it is estimated that the transaction will be completed in the first half of 2022, after the usual regulatory approvals.

Finally, during the third quarter, the land concessions “Arta-Preveza” and “NW Peloponnese”, for which the Group held a hydrocarbon exploration license, were returned to the Greek State, while in October the intention to return was notified to EDEY. concession to D. Patraikos.

Statement by CEO A. Siamisi

Commenting on the results, the CEO of HELLENIC PETROLEUM, Andreas Siamisis, pointed out:

“The recovery of the economy accelerated during the third quarter, mainly due to strong tourism, but also increased economic activity in areas that directly affect our industry. The Group’s results are improved at almost all levels compared to last year as a result of the better environment, but even more promising is the continuous and steady improvements in areas that we can control as a company, such as the availability of refineries, our commercial performance in Greece and abroad and cost management.

Unfortunately, the news is not only positive, as the ongoing global energy crisis, with a significant increase in international gas prices and a corresponding increase in electricity prices, as well as the cost of pollution rights, significantly affects the industry, but also the smooth energy transition.

The above make the process of strategic transformation of the Group and the implementation of our strategy “VISION 2025” even more imperative and necessary. “will lay the groundwork for growth in the new energy market and the equally significant decarbonisation of our core business.”

Since the end of July, OPEC ++ producer countries have agreed to a gradual increase in crude oil exports, by 400 thousand barrels per day per month, with a significant impact on global crude supply. Demand, however, continued to recover from low levels due to a pandemic, at a faster pace, with the result that supply shortages persisted and international prices rose further. As a result, international crude oil prices averaged $ 73 / bbl, up from $ 43 / bbl last year and $ 69 / bbl in the second quarter.

As a result of the increase in product demand, the margins of all the main products of the Group’s refineries recovered from the historical lows recorded during the pandemic. In addition, the increase in the supply of crude, particularly high sulfur, has led to a decrease in its price against Brent, with the Brent-Urals differential at the highest levels of the last decade. Finally, energy costs increased significantly, with gas and electricity prices reaching historically high levels. This led to a recovery in international refining margins, with FCC refineries trading at $ 5.2 / bbl and Hydrocracking margins at $ 2.9 / bbl.

The dollar strengthened slightly against the euro in the third quarter, with the euro / dollar exchange rate hovering at an average of 1.18, corresponding to last year’s levels.

Continued recovery of demand in the domestic fuel market

The lifting of travel restrictions, the restart of the economy, as well as tourism within the quarter, resulted in an increase in demand for diesel fuel by 8% compared to last year, at 2019 levels. Overall, demand in the internal market of fuel amounted to 1.6 million tons, reduced by 1% compared to the third quarter of 2019. The duty-free market also recorded a significant recovery compared to last year, with the consumption of marine fuels increasing by 28% to 712 thousand tons and aviation to more than double to 476 thousand tons, but to fall short of 2019 by 20%.

Reduction of financing costs, repayment of a € 201 million Eurobond.

On October 14, 2021, the Group repaid the existing bonds amounting to € 201 million, from cash, while it will examine the capital structure and the opportunities in the international markets, after the completion of the corporate transformation. The repayment of interest rate bonds of 4.875% will have a positive impact on the financial cost of the Group, which in the third quarter amounted to € 24 million, reduced by 4% compared to last year.

In addition, with regard to euro-bonds maturing in October 2024, a consensus proposal is underway to the bondholders to amend the existing terms, so that the split of HELLENIC PETROLEUM takes place in a way that will not affect the credit position of the bonds (credit neutral). Net Lending amounted to € 1.8 billion, significantly reduced compared to last year and at corresponding levels compared to the second quarter.

Main points of the results of the third quarter of 2021 for the individual business activities, are listed below:

In the Third Quarter 2021, the Comparable EBITDA Profits of the Refining, Supply and Sales sector amounted to € 57 million.

Production amounted to 3.6 million tons, recording an increase of 9% compared to last year, due to the increased availability of the Aspropyrgos refinery. Sales amounted to 3.8 million MT (+ 5%), with the domestic market growing by 13% to 1.1 million tons.

The total margin of ELPE refining system amounted to $ 8.7 / barrel, the highest in the last two years, due to the recovery of international margins, but also the supply & marketing performance.

Polypropylene margins, although lower than in the second quarter, remained high, leading Comparable EBITDA to € 21 million (+ 40%) in the third quarter 2021 and € 102 million overall in the 9 months 2021, twice as much as last year.

In Domestic Commerce, the recovery in fuel demand in all sub-markets has resulted in increased sales volumes and profitability to significantly higher levels, offsetting the significant increase in transmission and electricity costs, with Comparable Third Quarter EBITDAs at € 29 million (+ 68%).

In International Trade, the increase in sales in gas station networks and the good operational performance led the Comparable Third Quarter EBITDA to € 20 million (+ 15%).

The contribution of DEPA and its subsidiaries to the consolidated Net Profits of the Group for the Third Quarter 2021, amounted to € 3 million.

Elpedison EBITDA for the Third Quarter 2021 amounted to € 20 million (+ 31%) and for the Nine Months respectively to € 64 million (+ 50%), due to increased demand for electricity and the contribution of VAT factories. in the system mix, offsetting the decline in profitability in the retail sector. 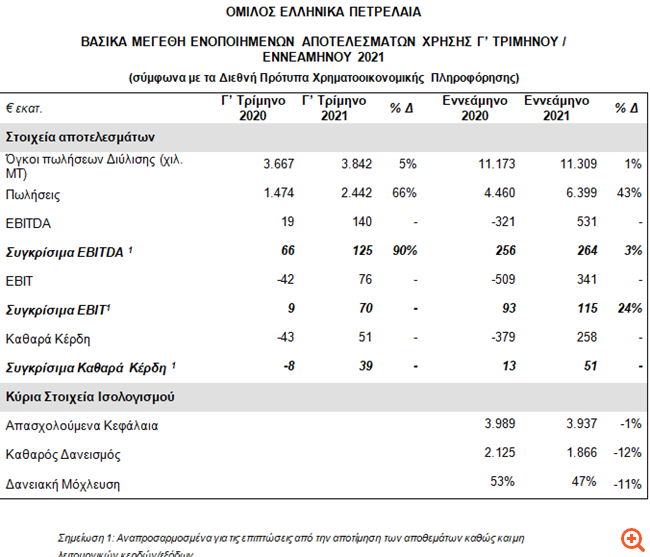 The Great Investment Debate: Find out if applying the 13th…

Brazil decides to maintain a 10% blend of biodiesel in…

Forty years of Vivienne Westwood in a book

ELPE: Restoration of profitability to pre-crisis levels in the 9 months

After 4 decades, the end of Gol and Uno ends the cycle of ‘popular cars’

Oil rises and recovers part of the losses from the previous session, keeping an eye…

With less income, milk consumption drops 10% and the sector predicts the worst year…

Derek Black Nov 30, 2021 0
The statement that the EasyJet does not outline winter travel prospects despite increased uncertainty in…

Nov 30, 2021
There are many tricks that have been recorded by computer and mobile cameras in the last two years that the…

Nov 30, 2021
This was the last request for Virgil Abloh and his wife Shannon: that the parade scheduled for this Tuesday (30)…

Nov 30, 2021
The emergence of the Ômicron variant of Covid-19 in southern Africa has mobilized scientists from around the…

Nov 30, 2021
Scientists from Australia developed the first mRNA vaccine of the country, which they hope can be adapted…
Prev Next 1 of 6,366
More Stories

After eight months of decline, indebtedness in Brazil rises…