Erdogan: The “semi-aircraft carrier”, the Blue Homeland without a map and the promise of the Turkish president 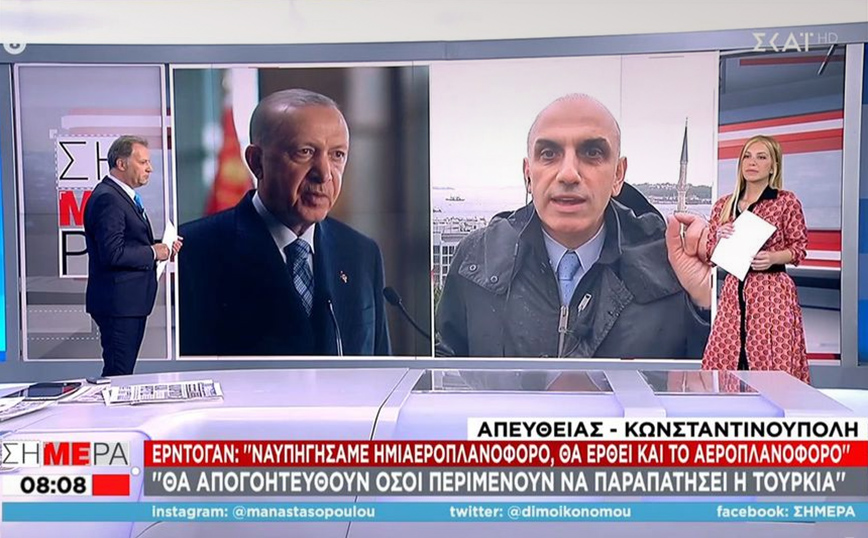 The construction of a “semi-aircraft carrier” was announced during a speech at the Navy shipyard of his country by the president of our neighboring country Tayyip Erdogan.

“Right now we are building our semi-aircraft carrier. It was launched. With God’s help, we will make the regular aircraft carrier. “And when we build it, we will reach a different point in the seas,” said Tayyip Erdogan.

“We will continue to disappoint those who rub their hands and wait for the Turkey “even if it falls down,” he added.

As it was pointed out during SKAI’s program TODAY on Tuesday morning (3/5) there is no “semi-aircraft carrier” and in fact Turkey seems to have built a helicopter carrier.

Erdogan’s speech, according to SKAI correspondent Manolis Kostidis, took place against the backdrop of a large frigate and the words Mavi Vatanim meaning Blue Homeland.

However, as Manolis Kostidis observed, there was no known map with which Turkey expresses its redemptive aspirations. “Turkey’s position does not change, but visually something has changed,” the journalist explained.

Turkey does not hide its dissatisfaction with Berlin’s reaction to the sentencing of businessman Osman Kavala.

The Minister of Foreign Affairs of Turkey Mevlüt Tsavousogluhe put up with Germany, openly accusing it of reacting because it was financing Kavalas and says that Ankara will not allow interventions in its internal affairs.

“And while there are so many court rulings for Turkish citizens, why do some countries put Osman Kavalas in the spotlight?” “Why is Germany summoning our ambassador to the Foreign Ministry for a case involving our own national? what is the reason; Because they finance it, they use it. Because they use these people to intervene inside Turkey. And we, as requested by our president, called our ambassador and clarified our boundaries. “You can not interfere in our internal affairs,” Tsavousoglou said.