GBP/USD bounces away from its weekly lows and rises towards 1.2170 on a weak dollar

The GBP recovered from two-week lows and is trading just above 1.2150, after dipping below 1.2000 for the first time since mid-June when GBP/USD tumbled towards yearly lows of 1.1933. At 1.2176, GBP/USD posts solid gains as the first half of the year is almost over.

The market mood remains negative, although it is not an excuse for the pound to recover some ground. US equities are falling, and US Treasury yields followed suit, driving GBP/USD higher. Meanwhile, the dollar index, which measures the performance of the USD against six pairs, after hitting a weekly high around 105,541, fell 0.34% to 104,736, weighed down by falling US bond yields.

The concern about a scenario of recession and global stagnation keeps investors on edge. On Thursday, US inflation showed some signs of slowing, the US Bureau of Economic Analysis reported. The personal consumption expenditure (PCE) index for May rose 6.3% year-on-year, less than expected. The so-called core PCE, the Fed’s preferred gauge of inflation, fell to 4.7% from 4.8% yoy forecast.

At the same time, the US Department of Labor released initial jobless claims for the week ending June 25, which topped the expected 228,000 and increased by 231,000.

Meanwhile, Federal Reserve Chairman Jerome Powell crossed the wires. He stated that it is the job of policymakers to find price stability, even during the new forces of inflation, while adding that the US economy is strong and can withstand monetary policy tightening.

At the same event organized by the ECB, Bank of England Governor Andrew said the pound was “one of many influencers on inflation” and added that he was not surprised by its recent weakness. Bailey acknowledged that the UK economy is weakening earlier and somewhat more than other counterparts.

From a technical point of view, GBP/USD still has a bearish bias, but the failure of sellers to retest the year lows near 1.1933 has opened the door for further gains. If GBP/USD breaks above the June 29 high at 1.2212, it will open the way for a rally towards the 20-day EMA at 1.2293. Otherwise, the major currency will consolidate until GBP sellers can drag the pound towards year lows near 1.1930. 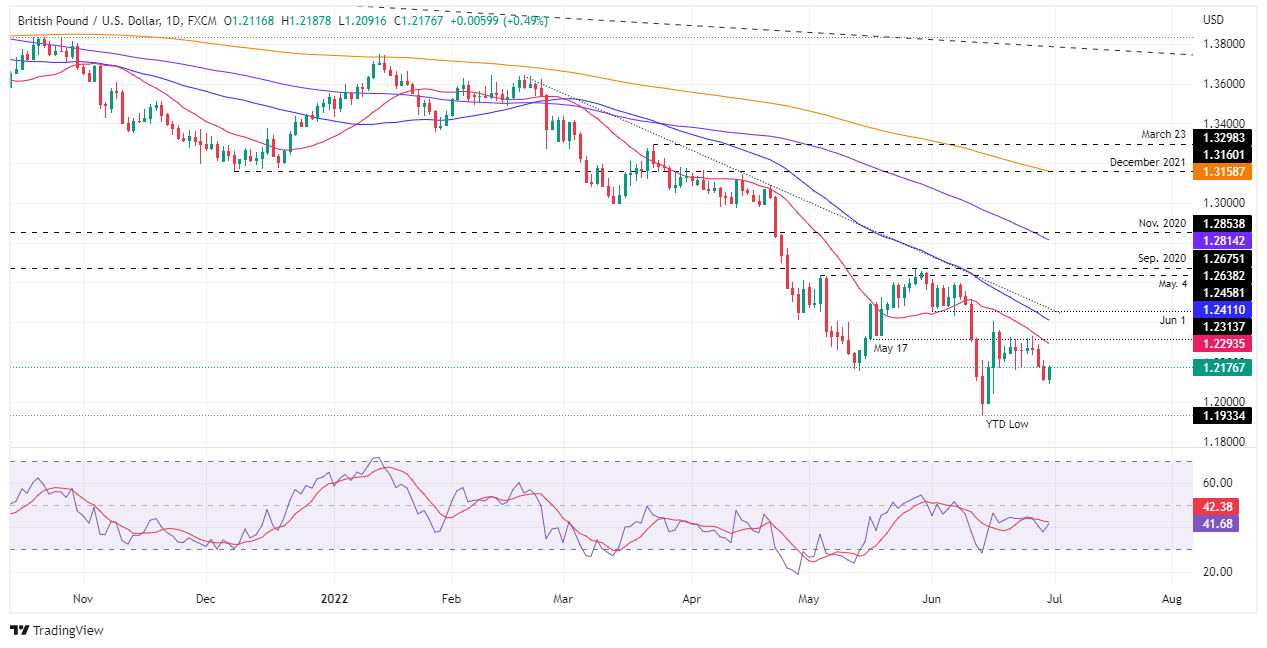