There are jobs that are very demanding and that even require that you spend a lot of time away from your family. A clear example of this are flight attendants and airplane pilots, as their profession forces them to spend many days traveling from one country to another and living in hotels.

However, there are dads who always have time to enjoy with their little ones, like Shanaya Motihar’s father. The little girl was so excited to see her dad piloting that her reaction went viral.

The little girl was traveling on a flight to Delhi, India, with her mother, without imagining that her own father was in the cockpit piloting the plane. When the little girl found out, her mother captured everything on video and then shared it on her Instagram account.

In the video you can see how the girl walks towards the boarding gate to the aircraft and once seated, the little girl saw that her father was there and that he was the pilot of the plane. Although at first he did not understand it well, after a few seconds he began to greet him effusively. He returned the greeting with a huge smile and with great excitement to be discovered. 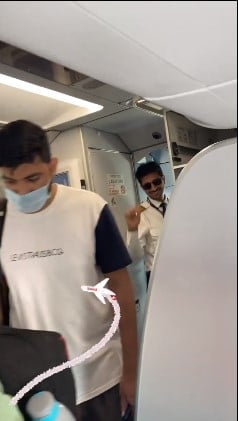 In the publication that the woman made, you could read:

My first flight with dad. He took me to Delhi. I was very excited to see it, it was my best flight so far. I love you dad.

Not all passengers have the privilege of having their father be the pilot, but Shanaya was so lucky and discovering who her father was, it was a magical moment. That was definitely one of the best days of her life, but best of all, she got to spend a little time with her dad.

On CNN Alta: Spielberg talks about the debut of “Amor,…

Christmas 2021, the artisanal panettone is made with red…

Dec 9, 2021
One of its most characteristic features Kim Jong Un, of its leader North Korea, in addition to the emblematic…
Prev Next 1 of 6,653
More Stories

An idea for the head: beyond the «keratin treatments», a…