He manages to sneak into the party where Bad Bunny was; they mistook him for a guard

Undoubtedly, one of the most famous artists of these times is the Puerto Rican urban singer Bad Bunny, so more than one would die to attend his concerts or see him in person sometime.

Last weekend, the story of a young Colombian named David Sánchez went viral on Twitter, who told how he fulfilled everyone’s dream after he managed to sneak into an exclusive party where celebrities such as Bad Bunny and Mora were.

I open a thread on how I ended up finishing with #BadBunny Y #Blackberry in #BlackDog without being on the VIP list 🧵: pic.twitter.com/0c9iW4d6Yu

The boy says that in January he bought some tickets to see the “bad rabbit” in concert with what is now his ex-fiancee, but since they ended three months ago, he didn’t feel like going, so he sold the tickets.

It turns out that the week that the concert would be came, so everyone was talking about it, which made him think that he made a bad decision selling the tickets, so to try to distract himself, David decided to go to a party. the day of Show.

When the date arrived, the boy still did not know what to do or where to go, until he met some friends and decided to go to one of their businesses. The place was above a bar, called Perro Negro.

David was having a good time and after a while he went out to say hello to a comrade. However, upon returning, he found a stir and some people asking people to move because, apparently, Bad Bunny was coming. Out of pure curiosity, the boy stood there, watching what was happening, when suddenly, he saw several bodyguards and the “bad rabbit” entering the bar.

The music was good, it was patched up there and I went out to say hello to a partner, when I turned back, everyone let them run, Bad Bunny was already coming, and I stayed in the corridor to see what the mkda was and from one moment to the next another one full of bodyguards and that mk is entering. pic.twitter.com/2fsOaRNQj8

In addition, David says that as soon as the artist entered, they closed the gate so that no more people could enter, but due to the euphoria that all the attendees had, the fence was out of adjustment. His great luck was to be dressed completely in black and to bring a cap.

From the outside they began to push the gate and loosen it. I was dressed in black and with the cap that can never be missing and from inside I started to organize the gate with the security and one of the security told me: ‘OK, daddy, let’s leave that so that no one comes in, come down then’ . 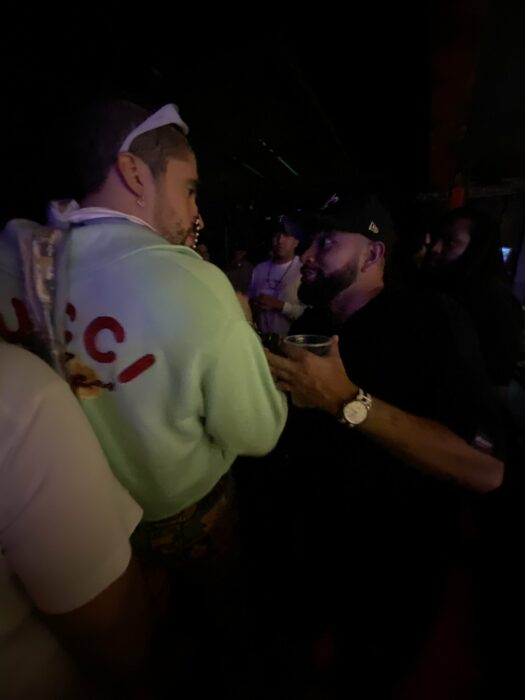 The guards confused him with one of them and let him pass, confused but happy, David entered the place and there he had the opportunity to live with Benito, and although it was forbidden, he recorded it and took photos of him.

The story has surprised thousands of users, as it is hard to believe that he managed to sneak into an exclusive party without even trying. There is no doubt that she was very lucky, because although she did not go to the concert, she got something better and unexpected.

I started recording sonero (for those who don’t understand, low profile) so that people wouldn’t notice. I insert video that is hanging around that was recorded by me and that I AirDropped to various people. pic.twitter.com/nROnOOpoar

Amaia Montero reappears after spending a month in a rehabilitation clinic