How much is the Greek merchant fleet worth today?

The value of the Greek merchant fleet “launched” this year, with a boost from the LNG transport market and bulk dry cargo.

In particular, according to data published by the analysis firm VesselsValue, the total value of the fleet is estimated at 145.8 billion dollars in November, while at the beginning of the year it stood at 93.2 billion dollars. This amount ranks the Greek fleet in third place globally, based on the value of its assets.

The most expensive fleet is the Chinese, with a value of 191.2 billion dollars, followed by the Japanese, which is valued at 187.6 billion dollars. The first of the Chinese is due to their dominance in the container transport industry. This year’s “take-off” of fares brought a significant increase in the values ​​of these steamers.

The “x-ray” of the Greek fleet

The Greeks play a leading role in tankers. Although, according to VesselsValue analysts, the industry’s revenues have fallen to historic lows, there have been some increases in the spot market, which have pushed up the values ​​of the overall fleet. The value of new and resale tankers such as VLCCs, suezmaxes and aframaxes has increased by 20% -30% since the beginning of the year. The Greek tanker fleet is valued at $ 41.5 billion and is by far the most expensive in the world.

At the same time, the Greeks have the most expensive LNG transport fleet. With fares in the spot rising significantly, the value of the Greek fleet in the LNG market has increased by $ 2 billion since the beginning of the year. In particular, today it is estimated at 19.1 billion dollars, while in the second place of the relevant list are the Japanese with a fleet worth 18.1 billion dollars.

In the bulk dry cargo sector, the value of the Greek fleet has almost doubled in 11 months, from $ 28 billion to $ 52.7 billion, due to high fares. “Greeks remain active in the used car market,” say VesselsValue researchers. In fact, as the “Greeks” say, they have bought about a quarter of the bulk carriers that have “changed hands” this year. The Greek bulkers fleet comes third behind the Chinese ($ 53.2 billion) and the Japanese ($ 62.9 billion).

Finally, the Greek fleet containerships is valued at $ 27.7 billion and is in fifth place on the list. The small share of Greeks in this market does not allow a better ranking. As mentioned, the most expensive fleet in the industry is the Chinese ($ 78.8 billion), followed by the Japanese ($ 49 billion). 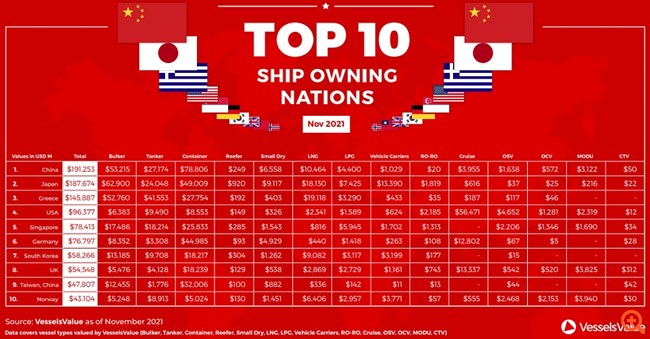 Working meeting of the Deputy Ministers of Justice and Culture G. Kotsiras and N. Giatromanolakis

Insurance companies: The frequency of vehicle liability losses decreased in 2020

In defense and health the largest increases in spending

What cryptocurrencies can fall in price?

Derek Black Dec 1, 2021 0
It took about two months for Netflix to dub Squid Game, one of the most viewed and talked about series of this…

Dec 1, 2021
It comes from Japan and interprets its colors, atmosphere and art. Let's talk about the Shiseido lipstick…

The Sheikh of Dubai, Queen Elizabeth and a scandal of many…

Dec 1, 2021
A «close friend of Queen Elizabeth II"(As described by the British media) is exposed in the face of a megaton…

Dec 1, 2021
Explosion occurred at a train station in Munich at a place where they were carrying out work, as announced by the…
Prev Next 1 of 6,403
More Stories

The forecast for the S2F model in November fell short of…

V. Kikilias in France 24: Over 10 billion euros of Tourism…