Is England throwing away the mask, taking away almost all the measures – “Freedom Day” or a leap into the unknown? 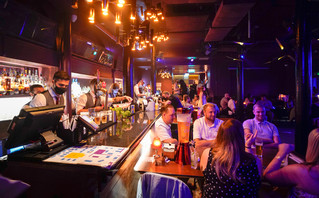 THE England throws off the mask, removes almost all restrictive measures to stem the spread of the new coronavirus pandemic today. This is a decision that worries the scientific community and politicians.

“Freedom Day” or a leap into the unknown? The French Agency typically wonders.

The death toll in the UK is 128,700 due to COVID-19; SARS-CoV-2 cases are rising rapidly over the weeks. The country has the highest number of infections in Europe; it has exceeded 50,000 cases in two consecutive 24 hours.

Among those infected is Health Minister Sajid Javid, who was forced into solitary confinement after being diagnosed Saturday.

At a time when Britain is lifting the obligation to wear a mask and abolishing the so-called social distance, the Prime Minister Boris Johnson and Finance Minister Risi Sunak, who had contact with the case, have also entered a period of isolation.

Kir Starmer, the leader of the main opposition Labor Party, has denounced the Tory government’s “chaotic” management of the pandemic.

Boris Johnson prefers to rely on the “individual responsibility” of everyone

Despite the continuing wave of infections, Boris Johnson confirmed the lifting of almost all restrictions that remained in force from today, Monday, “Freedom Day”, preferring to rely on the “individual responsibility” of everyone.

He cited the success of the immunization campaign – more than two-thirds of adults in the UK have been vaccinated – which “weakened” the link between cases, hospital admissions and deaths, and allowed the public health system to handle the situation with greater ease.

In a video he uploaded to Twitter yesterday, however, Boris Johnson called on his fellow citizens to be prudent, emphasizing its “extreme infectivity”. Delta variant. “Please be careful,” he warned.

The big step in lifting the restrictions was scheduled for June 21, but was postponed for four weeks to fully vaccinate several million citizens and even save time in the face of the virus.

The mask is no longer mandatory

From midnight, venues and stadiums can be open again with 100% capacity, discos can once again welcome the public, bars and pubs offer their services to anyone who finds a place and there are no restrictions on public gatherings.

THE mask It is no longer mandatory, but its use remains recommended in transport and shops.

Scotland and Wales, which enjoy autonomy in public health matters, maintain the obligation of citizens to wear masks indoors and in public transport.

For the official opposition, the government is handling the epidemiological situation in a “foolish” way, amid an outbreak of cases due to the highly contagious Delta variant. The number of infections may even reach 100,000 on a daily basis during the summer, warned Johnson’s Health Minister himself.

British and influential foreign scientists have called on the British government to reconsider its decision, which “risks undermining efforts to control the pandemic not only in the United Kingdom but also in other countries”.

Even in Boris Johnson’s conservative faction, many do not hide their concern. Former Health Minister Jeremy Hunt said the situation was “very serious” as hospital admissions multiplied, and that the government may have to re-impose measures, as happened in Israel or the Netherlands.

550 patients with COVID-19 are currently being treated in the UK Intensive Care Unit (ICU). It was over 4,000 at the peak of the so-called second wave in January.

In addition to the confirmed cases, millions of people who have come in contact with the cases are being asked to stay at home for ten days.

To prevent health services from facing a shortage of staff, the government has decided that in England, fully vaccinated staff will be able to come to work, where they will be tested daily, without having to stay. in strict isolation in their homes.

There will be a relaxation of the measures from today at the border as well.

People who have been fully vaccinated in the UK, even if they arrive from “orange” countries – including tourist destinations such as Italy or Spain – will no longer be required to be quarantined upon arrival. France, however, is excluded from the Beta variant, which worries London because it is resistant to the AstraZeneca vaccine, which is widely used in the United Kingdom.

The first smartphone with a quality sub-screen camera: official images, release date and specifications of the ZTE Axon 30 5G