Joe Biden’s unusual attack on Donald Trump and his “extremism”. 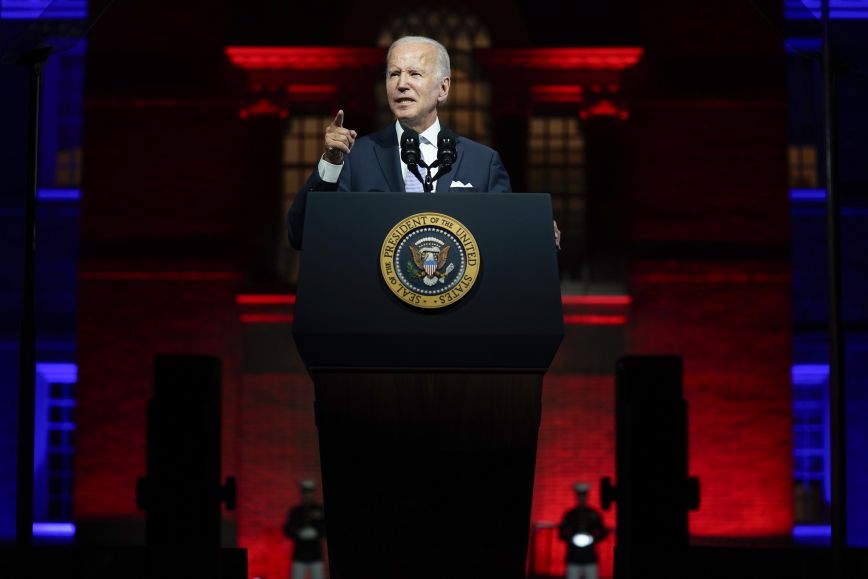 THE Joe Biden launched a rare direct attack on his Republican predecessor, denouncing on Thursday the “extremism” of Donald Trump and his followers, whom he accused of threatening to destroy “the very foundations” of American democracy in the city that was its cradle.

In Philadelphia (Pennsylvania, east), he lamented that “Donald Trump and the ‘MAGA Republicans’ represent an extremism that threatens the very foundations of our democracy.”

The former president and those who espouse the ideology summed up in the phrase Make America Great Again “disrespect the Constitution. They don’t believe in the rule of law. They do not recognize the will of the people,” the Democratic president said in a speech that the White House promised would be “major.”

Behind him, illuminated against the night sky, was Independence Hall, the red brick building where the Declaration of Independence and the US Constitution were adopted.

The 79-year-old Democrat, who gave his first campaign speech there when running for president, is well aware that Pennsylvania, the home state of Philadelphia, is likely to be key in November’s midterm elections. And, consequently, of the rest of his term.

The Democratic leader’s speech reflects his intention to dramatize the upcoming midterm elections, which traditionally do not favor the party represented in the White House. His purpose is to turn them, more or less, into a referendum on Donald Trump.

Representatives of the radical right “embrace the rage. They feed on chaos. They don’t live in the light of truth, but in the darkness of lies,” said the head of state, who wants to electrify the Democrats’ electoral audience and convince the undecided.

Joe Biden had already used the campaign refrain of “fighting” for the “soul of America”, albeit in a much milder atmosphere, of reconciliation, of calls for unity.

For a long time the former senator, a veteran of American politics, touted the benefits of working with well-intentioned Republicans.

But not last night.

“Not all Republicans embrace this extreme ideology,” he acknowledged, before pulling one more arrow from the quiver: “there is no doubt that today’s Republican party is dominated, led and intimidated by Donald Trump” and his followers.

Denouncing the real estate tycoon’s continued and baseless attacks on the validity of the 2020 and 2024 election results, Joe Biden said “you can’t love your country only when you win.”

A few hours after the Donald Trump vowed on Thursday to grant clemency to those convicted of the January 6, 2021 attack on the federal Capitol, the Democratic president stressed “there is no place for political violence in the United States,” insisting that contesting the election results would lead to “chaos ».

When during the speech a group of his political opponents gathered near the scene chanted “Fuck Joe Biden,” the president countered: “It’s their right to be outraged. We have a democracy.”

However, he did not resist the temptation to comment: “they never let good manners drown them”.

According to a poll published yesterday by the Wall Street Journal, if the midterm elections were held today, 47% of the electorate would vote for the Democrats and 44% for the Republicans, as reported by Agence France-Presse and relayed by the Athens News Agency.

The right held a 5-point lead in March.

The Democrats can thus dream of success in the elections that will renew the composition of the entire House of Representatives and a third of the Senate. In the midterm elections

But of course the opinion polls do not give any certainty and in American political life two months equals an eternity.

The political debate has shifted since the beginning of the summer.

Inflation has slowed somewhat, while Joe Biden succeeded in passing a series of reforms and announced the death of the al-Qaeda leader in a US airstrike in Kabul. Which weakened the two big axes of the Republican campaign — about purchasing power and the possibility of the oldest president ever elected in the history of the USA to rule.

Several polls show that issues that favor Democrats, such as abortion rights and social security, are gaining weight, while Republicans are increasingly perceived as reactionary by some of the electorate.

In their first reactions yesterday, Republicans tried to steer the debate back to topics more favorable to them.

“The soul of America has nothing,” diagnosed Senator Lindsey Graham, who, after a brief hiatus, returned to the ranks of Mr. Trump’s staunchest allies. “Americans are suffering because of your policies. The rapidly increasing inflation. The rampant crime. The rise of terrorism. The broken border. Leave the sermons,” he added, addressing President Biden.

Recently, Joe Biden accused Donald Trump’s supporters of embracing an ideology he called “semi-fascism.” The term caused outrage in the conservative camp, which accused it of fueling division.

Kevin McCarthy, the Republican who is being anointed for the key office of speaker of the House of Representatives, yesterday accused President Biden of “demonizing”, nothing more or less, “millions of hard-working law-abiding Americans”.

Centenary brands are among the most used in Brazil, says research

Port of Santos sets record in cargo handling in 2022

In this company, employees pay a heavy fine if they disturb colleagues who are on leave