Joint initiative Plakiotaki- Makri for discounts on the…

Government sources: The NATO Summit is at a critical…

The strong ties that unite Greece and the United States of America on this great bridge of their history were highlighted by the Prime Minister in his speech in the Congress.

At the same time, in the historic first speech of the Greek Prime Minister at the joint Session of the Senate and the House of Representatives, beyond the common paths of the two countries, Mr. Mitsotakis brought to the forefront strong messages to Russia and Turkey, inviting members of Congress. to take into account the neighbor’s delinquency when making armaments decisions in the Eastern Mediterranean.

“After the Cold War, we naively believed that Europe had found the path to peace. We believed in the deepening of the European Union. We naively ignored Russia’s signs and actions in Syria and Crimea. Today we are looking at Kyiv and Odessa. We are looking at “We are in Ukraine. And what we are seeing is a people who want to secure the right to freedom. We have nothing against the Russian people. But we can not whistle indifferently in a struggle that is so strongly reminiscent of ours.”

“We know what it means to have to take up arms to protect your freedom. We know the victory that comes from not capitulating. We understand the importance of friends and the strength of allies in our values. We recognize the importance of being “On the side of Ukraine. For Ukraine and against Mr. Putin”, Mr. Mitsotakis stressed.

“We have provided humanitarian aid, we have helped the Ukrainians with weapons. Mr Putin is trying to build a world where territorial claims are based on historical fantasies. He will not succeed. He must not succeed. “to all authoritarian states and leaders, that acts that violate international law will not be tolerated by democracies,” he added.

As he did yesterday, in his statements with Mr. Biden, the Prime Minister also focused on Cyprus.

“I urge you not to forget an open wound. And I am referring to the invasion and division of Cyprus. This issue must be resolved in accordance with international law. In accordance with UN resolutions. No one will accept a two-state solution in Cyprus.” he noted, addressing members of Congress.

His messages, no, were loud, looking at the neighbor.

“Greece is always looking for peace. We are always open to dialogue. International law is what leads us and I want to be clear. We will not tolerate an act that violates our sovereign rights. This includes overflights that must stop. “The last thing NATO needs is another source of instability in its eastern wing. And I urge you to take that into account when making armaments decisions in the Eastern Mediterranean,” he said, referring to an indirect reference to the F-16s.

At the same time, he analyzed the Greek plan to turn our country into an energy hub in the Balkans and Eastern Europe. But also the strategy for attracting investments, pointing out that Greece is a top investment destination.

At the forefront of the prime minister’s speech was the battle that must be fought, especially in this critical period, against populism.

“In Greece we have paid the price of populism… There are three main forces that unite democracies. Social capital. Strong institutions and common histories that forge a single identity… We must strengthen our democratic ties. We must tackle income inequalities. “We must transform social media to be less corrosive to society. We must educate our young people to seize opportunities,” said K. Mitsotakis. 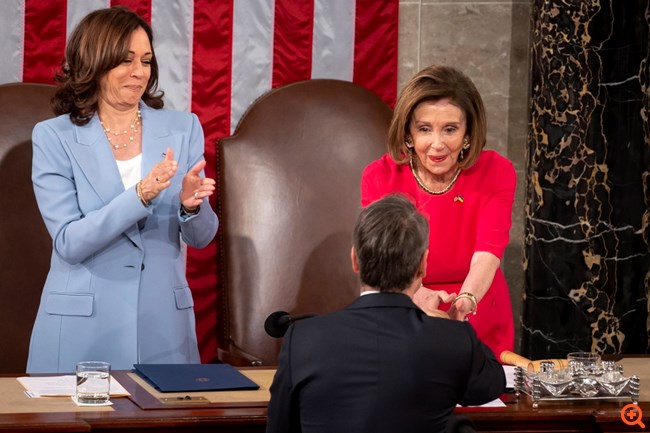 Shortly before his speech, K. Mitsotakis had met with the Speaker of the US House of Representatives, Nancy Pelosi.

“It is a great honor for me to welcome the Prime Minister to the Capitol, Greece has been the source of democratic principles since antiquity. It was the source of inspiration for our ancestors and then we became a source of inspiration for them. We have a lot to discuss but we want to say “We are with the Greeks and we are pleased to welcome the Greek Prime Minister,” said Nancy Pelosi.

“I am honored to be the first Greek Prime Minister to speak to Congress. You have demonstrated our common path. Democracy was born in ancient Athens. Our ancestors were inspired by your independence. We fought together during two world wars. “Our relations are at their best. It is my honor to speak to the House of the American people,” said Kyriakos Mitsotakis.

ND: In the case of Korkonea, the most favorable provisions applied by SYRIZA apply

SYRIZA-PS: The management of ERT in an unacceptable way tries to prevent the work…

Kanye West “joked” about his divorce with Kim Kardashian…

Jun 28, 2022
It is known that the divorce between Kim Kardashian and Ye (Kanye West) took place amicably in February 2021. But…

Jun 28, 2022
The Prime Minister of her local parliament ScotlandNicola Sterzon, announced that she will be second referendum…
Prev Next 1 of 15,248
More Stories

N. Iliopoulos for ND: Let them answer honestly what are the…

Sexual violence against women and children grows in Brazil…