The credit prospects of the eurozone countries in 2022 are analyzed by the rating agency Moody’s in a new report (and a few hours before its scheduled “verdict” for Greece tomorrow), examining the challenges surrounding debt and boosting growth on its way return to “normalcy”. He points out that the high debt levels caused by the pandemic will be the biggest “headache” for economies and governments and the biggest risk for their borrowing costs, while the withdrawal of support measures and the ample shock increase the risks. growth and substantially undermine debt relief efforts. Greece, as the house points out, although it will continue to have a very high level of debt to GDP, but will note the largest decrease in 2022, with the significant impetus to the growth that will give the resources of the Recovery Fund from now until 2017 , to help in the further and gradual fall of the debt.

More specifically, Moody’s generally expects that eurozone countries will continue to benefit from favorable economic conditions in 2022, but high debt levels will be a major challenge for governments. In this context, the house estimates that the prospects of the creditworthiness of the economies for the next 12 to 18 months are stable, guided by the positive economic and monetary conditions.

High vaccination rates, according to Moody’s, combined with national and European spending plans will support the eurozone-wide recovery in 2022, helping to moderate some leverage following significant pandemic debt-induced increases. However, differences in debt trends between countries will become more apparent and credit pressures could begin to increase in some countries.

Developments with the pandemic situation, the gradual withdrawal of support measures, supply bottlenecks and a more permanent increase in inflationary pressures increase the risk around growth and affect debt reduction efforts, as noted by the house .

Investments and structural reforms linked to the EU Recovery Fund could significantly boost productivity and growth potential. Moody’s estimates that EU funding could add 0.7% to annual GDP growth in southern European countries that are the largest beneficiaries in terms of GDP, such as Greece, Italy, Portugal and Spain. between 2021 and 2027.

Political risk remains moderate across the eurozone, but social pressures are likely to intensify after the pandemic, affecting policy dynamics. Governments in peripheral countries will face greater social pressures, mainly because the pandemic has highlighted pre-existing inequalities and increased demand for social services, including health care.

The largest debt reduction in Greece in 2022

Some modest debt reduction is possible next year, but debt levels will remain well above pre-crisis levels. Economic growth and a reduction in primary deficits as pandemic-related support measures are withdrawn will reduce the eurozone’s average public debt burden by 1.2% in 2022, according to Moody’s.

Some heavily indebted countries will see the largest reductions, with Greece first, which at home will see its debt fall by 10.1% (to 191% of GDP), Cyprus by 6.8% and Portugal (-5.9%) to follow, however the debt-to-GDP ratio will remain well above 100% despite this leverage.

While France, Italy and Spain are projected to reduce debt in 2022, the reductions will be modest in relation to the debt increases associated with the pandemic recorded in the last three years (+ 18%, 25% and 25%). ., respectively).

While the cost of debt will remain low for several more years, debt sustainability will eventually begin to deteriorate if debt remains high, warns Moody’s.

A key credit factor in the coming period, he says, will be the extent to which governments will be able to take advantage of the low interest rate period – which will now be limited – to reduce primary deficits to a point where they can help reduce it. debt level.

Even with low financing costs and strong economic growth, debt reduction will require very significant fiscal consolidation in countries such as France and Italy, while Recovery Fund resources will significantly boost growth in the South by 2027, with Greece, along with Italy, Portugal and Spain, receive the highest impetus, which stands at 0.7% per annum, assuming full capital absorption, which will also support the reduction of debt ratios. 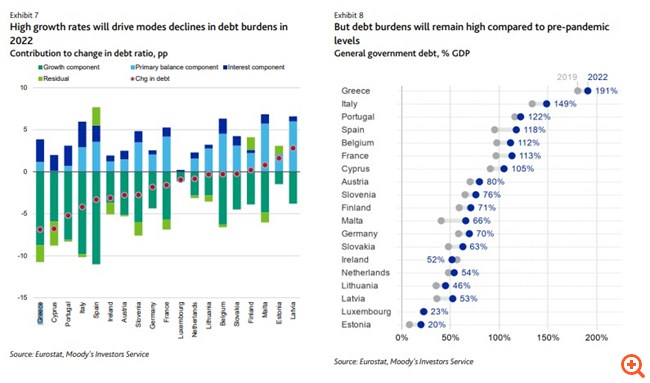 Greek GDP above pre-crisis levels in 2022

In general, Moody’s estimates that almost all countries will return to pre-pandemic production levels by the end of 2022. At the eurozone level, production will be 2.7% higher than pre-pandemic levels (in real terms) in 2022. However, this hides significant inequalities.

Despite the strong growth rates of 2021, Italy and Greece will slightly exceed the GDP of 2019 and Spain, whose growth is expected to be weaker in 2021 than the above countries, will remain marginally below pre-crisis levels. reflecting the economic importance of their tourism sectors and the adverse effects of the 2020 pandemic.

By contrast, Ireland, Estonia, Lithuania and Luxembourg were less affected by the crisis and will record GDP levels at least 5% higher than 2019 levels. 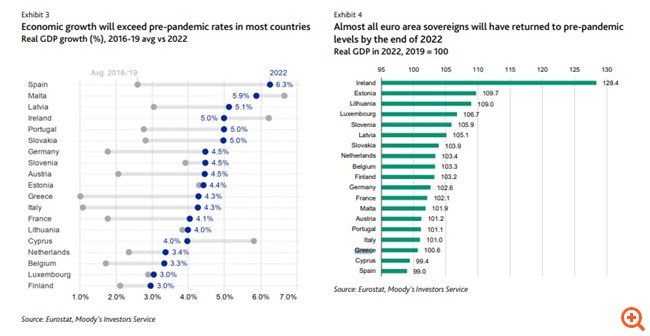