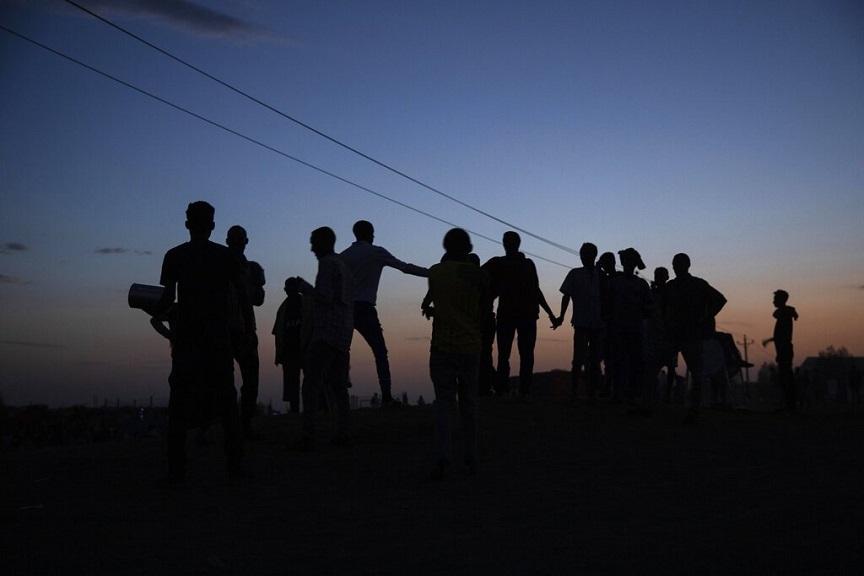 Israel says it will test bullet that killed reporter;…

Denmark: Shootings in a shopping center in Copenhagen…

The conflicts and the Natural Disaster, displaced in 2021 almost 60 million people in other parts of their country, with 2022 even more gloomy.

The internally displaced amounted to 59.1 million in 2021 and half of them were under 18 years oldaccording to the Internal Displacement Monitoring Center (IDMC) and the Norwegian Refugee Council (NRC).

From year to year, this number, which does not include refugees abroad, continues to grow and a new record is expected to be recorded in 2022 due to the Russian invasion of Ukrainewhich began on February 24.

This is the second highest annual number in the last ten years and follows that of 2020, when a record number of internal displacements was recorded due to a series of natural disasters.

“2022 is announced to be bleak”mainly because of the war in Ukraine, warned the director of IDMC Alexandra Bilak in a press conference that was given.

More than 8 million people have been displaced inside Ukraine more than two months after the start of the Russian invasion, according to the OHE.

The situation in the world “has never been so bad”, NRC Secretary General Jan Egeland remarked, noting that “the world is collapsing”.

“The situation today is in fact incredibly worse than what this record number we have shows. “What we need is for world leaders to make a titanic change in their way of thinking in order to avoid and regulate conflict, in order to put an end to this sharp increase in human suffering.”

Sub-Saharan Africa had the highest number

Last year, Sub-Saharan Africa was the region with the highest number of internally displaced persons: many people were displaced many times, including five million people in Ethiopia alone, a country plagued by severe drought and in which a conflict broke out in late 2020 in the Tigray region. This is the highest number ever recorded in a single country.

Unprecedented numbers were also recorded last year in the Democratic Republic of the Congo and Afghanistan, where a return to Taliban rule combined with the drought pushed many people to flee their homes.

In Myanmar, where the military seized power in a coup in February 2021, the number of people fleeing their homes also reached record levels.

The Middle East and North Africa, on the other hand, have the lowest levels of new displacement in ten years, as conflicts in Syria, Libya and Iraq have escalated somewhat, but the total number of people displaced in the region remains high.

Thus, Syria still has the largest number of internally displaced persons due to the conflict, ie 6.7 million at the end of 2021. It is followed by the DRC (5.3 million) and Colombia (5.2 million), as well as Afghanistan and Yemen (4.3 million each).

Although those displaced by the conflict continue to rise, natural disasters remain the main reason people are being forced to flee their homes (23.7 million displacement in 2021).

At least 94% of these displacements were attributed to weather and climate disasters, such as cyclones, floods and droughts, which are becoming more frequent and more pronounced due to climate change.

70% of internal disasters associated with natural disasters in 2021 were recorded in China, the Philippines and India.

However, more and more, conflicts and natural disasters are going on, Egeland stressed.

The Pentagon spokesman is being transferred to the White House

Italy: A glacier collapsed in the Alps – Six dead and ten missing

Adam, Moroccan who grew up in Italy: “We affirm our sexual identity here…

Jul 3, 2022
His absence from Twitter, which he owns, for two weeks in a row, had made us think of many possible backstories.…

Russia: The very simple mistake that someone can make and be sent to…

Jul 3, 2022
People have many prejudices about her Russia. Yes, the country has notoriously filled screens with high-alert…

Jul 3, 2022
There is no doubt that the one in between Francesca Pascale and Paola Turci is now the wedding of the summer: a…

Why does the US Supreme Court have so much power?

Jul 3, 2022
With recent rulings on abortion, gun control, religious freedom and the environment, the US Supreme Court has…
Prev Next 1 of 15,486
More Stories

The UK is speeding up checks on hiring new airport staff