Only curious giant ships from science fiction films of the last century got into this material – not a single modern one. There are three explanations for this: firstly, in fresh blockbusters, the size of ships is not given due attention; secondly, information about their dimensions is practically inaccessible to fans; thirdly, none of them are so interesting that I would like to tell. However, this is a good reason to remember the really cool science fiction films and series of the golden era. All of them definitely deserve the closest attention.

▶︎ Important: the size indicated below is the distance between the two farthest points of the space vessel, which is most often a length.

The crew of Voyager met this extremely long ship in the 70s of the XXIV century according to the chronology of the Star Trek universe. Its large size is achieved through a modular design. The spacecraft, which is designed to transport members of the Varro race through bleak space, consists of individual capsules connected to each other. The heroes of the series helped the ship repair the damage and go home. Separate blocks of this spaceship were encountered in later episodes of the Star Trek universe, which clearly hints at the integrity of this universe.

▶︎ Fact: Few Star Trek fans remember that in the episode with the varro ship, Voyager itself could have been badly damaged. Synthetic silicon parasites that eat duranium alloys are to blame for everything – they were deliberately released by one of the varro, who wanted to leave the ill-fated “ark”. 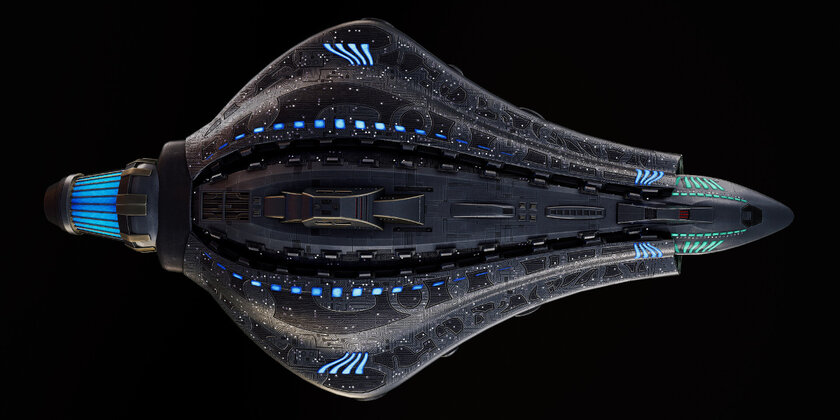 Another spacecraft from Star Trek – it turned out to be not only long, but also quite massive. It is difficult to say that Voyager collided with him of his own free will – the colossus actually dragged the vessel of the heroes of the series on board with the help of a special tractor beam. More than 3,000 of these Voyagers could fit inside a huge spaceship – it was a real city. Apparently there were a lot of them. However, this is only speculation, since in films and TV shows this technologically advanced race has not been given due attention. 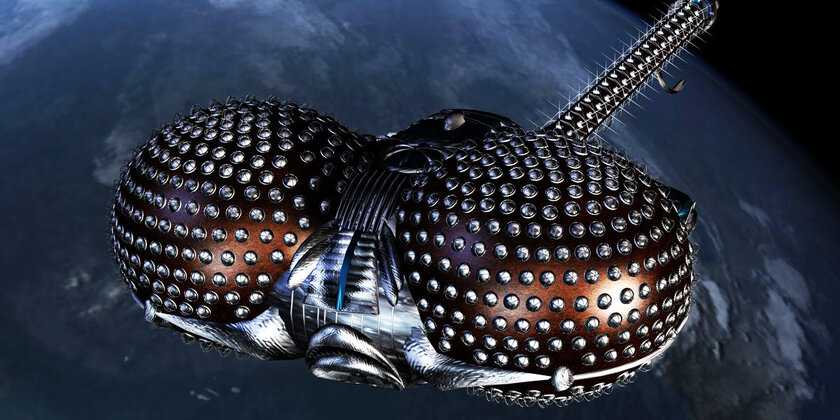 If almost everyone has heard about the Star Trek universe, then only a few have heard about Lexx. The reason for this is the low prevalence of the franchise around the world – in the 90s it “thundered” only in the UK and Canada. Until I began to study fantastic giant spaceships, I myself did not know about anything like that. This vessel got into this material due to an extremely strange design. At one end of the ship was a pair of spherical compartments, from which extended a long “sprout” of internal technical and residential compartments. All the events of this series actually took place on this ship alone.

▶︎ Fact: in the episode “The Game” of this series, a game of chess was demonstrated. It turned out to be a reproduction of the legendary confrontation between grandmasters Louis Charles Mahe de Labourdonnais and Alexander McDonnell, which took place back in 1834. 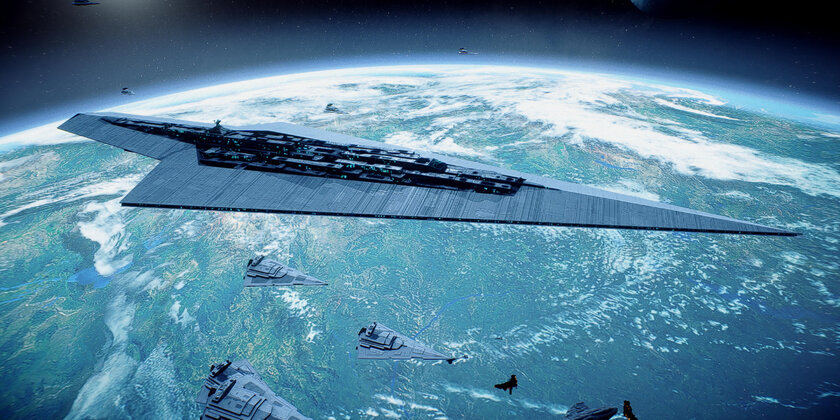 Of course, such material could not do without the space shuttle from Star Wars. Moreover, in a galaxy far, far away, there are several suitable vessels. One of them is the Imperial Super Star Destroyer, which was larger than not only a conventional destroyer, but also a Rebel starship. Moreover, turbolasers and laser cannons were installed throughout its hull, which made it unsurpassed in terms of military power. The Executor is considered the largest of the Super Star Dreadnoughts and one of the largest shuttles in the entire franchise – however, in terms of dimensions, it certainly does not take first place in it. 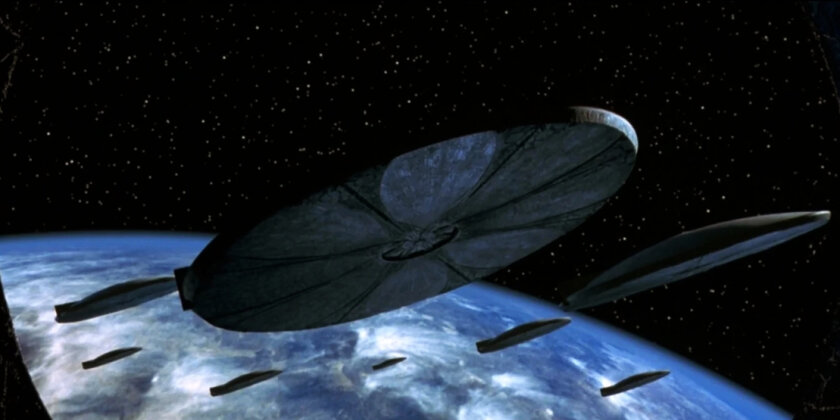 What do the city-destroying alien ships from Independence Day have in common with the Frisbee? Of course, the form! But the size of the flying vessel is “slightly” larger … The picture shocked the world of science fiction when it showed the public not one such shuttle, but three dozen at once. According to the plot of the picture, they hovered over the largest cities in different countries of the world in order to – attention, “spoiler” – destroy. It is curious how helpless the picture showed humanity against the background of the invaders, who clearly did not come in peace. They could not be fought even with the help of nuclear weapons, but primitive malware eventually resolved the situation.

▶︎ Fact: at the beginning of the film, television screens in different countries of the world show news releases telling about unexpected guests. There was also a Russian broadcast, in which they showed a city with the amazing name Novosyoyrsk – apparently, Novosibirsk was meant in this blunder. 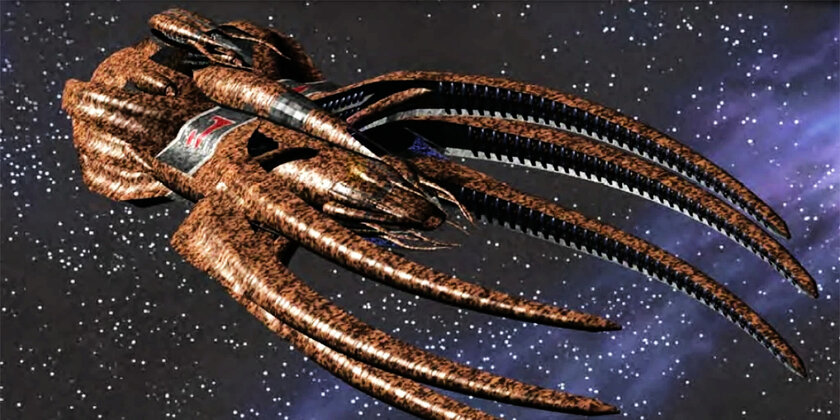 In the universe of the series there was far from one such ship. However, humanity, to which the Vorlons posed a clear threat, managed to destroy only one such vessel. Just imagine: the spaceship was so big that it would take almost half an hour to get from one end to the other in your own car at an average speed of 100 kilometers per hour. However, it is likely that the race that created such a massive vessel had more modern means of moving inside it. 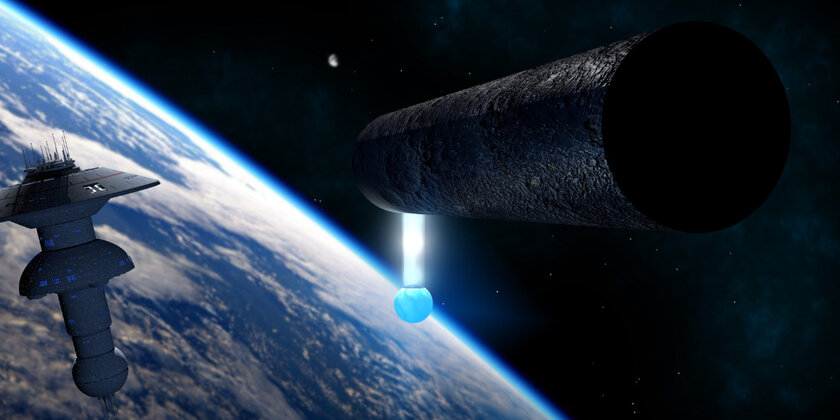 Another interesting spaceship from Star Trek that really deserves attention. First of all, it is interesting for its shape – this is the most common cylinder, deadly for earthly inhabitants. He flew to the Earth in the XXIII century and began to send signals to it with the voice of humpback whales. After deciphering the message, it became clear that the spacecraft would destroy the planet if it could not talk to a marine species that had long since died out on it. To deal with this issue, the heroes of the picture had to travel back in time a couple of centuries ago in order to find an individual suitable for negotiations and return to their own time.

▶︎ Fact: the alien probe created a specific energy field that disabled absolutely all the electronics nearby. It is difficult to say whether this was a side effect of his work or an intentional action. 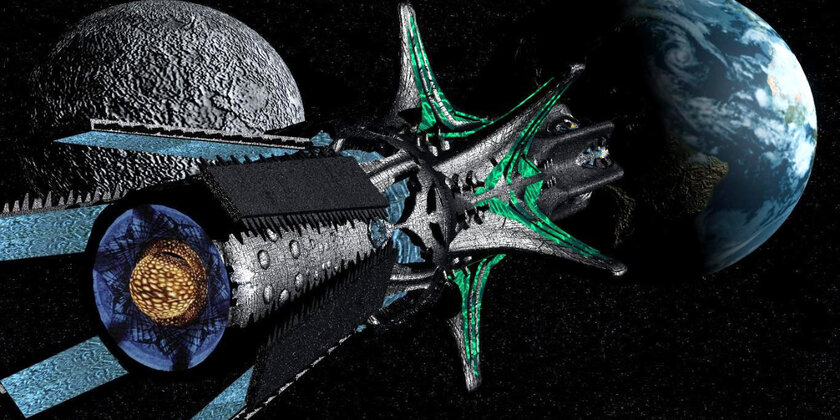 According to the plot of the film, V’Ger was part of the American space program Voyager, but got lost in a black hole that happened on the way. The probe was badly damaged, but fell into the hands of an alien race – they upgraded it to collect information. As a result, the spaceship absorbed so much knowledge that it gained consciousness. He had only one goal left – to transfer them to his creator. And so it happened: the probe merged with one of the characters in the picture, turned into a new creature and moved to another dimension. On this, his amazing story, which I still want to revise, actually ended. 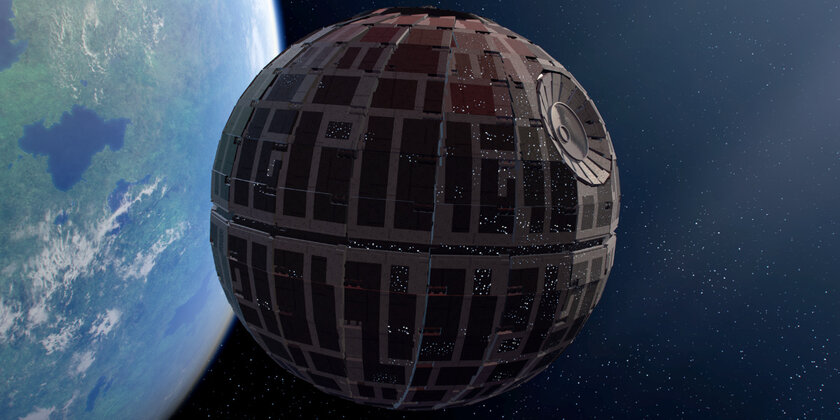 On the one hand, in the relevant episode of his beloved saga, Obi-Wan called the Death Star a space station. On the other hand, it seems to have been mobile enough to travel from planet to planet to at least destroy them… The Death Star was built by the Empire to reinforce its tyranny across the galaxy, Luke Skywalker succeeded in destroying it by finding the undeniably far-fetched weakness. However, this does not negate the fact that the station has always been considered one of the most monstrous spaceships in Star Wars.

▶︎ Fact: after the destruction, the Death Star was rebuilt, and then destroyed again – this happened in another episode of the space saga. Moreover, it is interesting to note that there were two such giant stations in the Jedi and Sith universe. 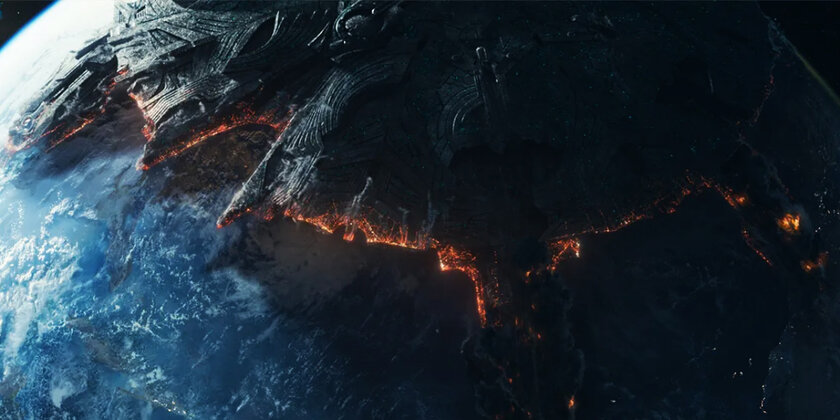 The diameter of the colossal ship of aliens that attacked Earth is comparable to the size of Ceres, the largest asteroid in the solar system. Moreover, if it were made entirely of steel, it would certainly have an equally powerful gravity. At least three dozen Death Stars would fit in the hull of a giant ship (not in length – in volume). Fantastic construction of an alien civilization. However, there is absolutely nothing surprising in its size, because the only thing that the race of unexpected guests was engaged in was the absorption of worlds. A worthy giant for this collection, as well as for the world of fantastic cinema.

Natural gas: the “15” will request a new proposal from the Commission

Earth Has 8 Billion People, This Man Wishes Nobody Existed – His Controversial Movement