Outrun The Squid Game. Why Arcane is worth watching even for those who haven’t played LoL

Although the specialized media spoke rather sparingly about the project, and the publisher did not particularly invest in PR, the animated series “Arcane” literally conquered the whole world right after its release. And these are not unfounded statements, but irrefutable facts – on Metacritic, the average viewer rating is 9.1, on IMDb it is the best original Netflix series, it topped the charts in 38 countries, and the project easily bypassed Game of Squid in views. though it seemed impossible. The reason for this incredible and unexpected success, it seems to me, is that although the cartoon was “filmed” in the League of Legends universe, in fact, you don’t need to be a devoted League of Legends fan to enjoy it.

💡 Important: you can read and not be afraid of spoilers, they will not be here.

A story you can understand in ten minutes

The main magnet of interest, thanks to which Arcane breaks every conceivable and inconceivable record, is a storyline with a foundation in the form of class inequality. More precisely, here is the whole city of Piltover, which is built on this inequality – there is the upper part, where the elite, the cream of society, inventors, the rich and other important guys live, and there is the underground Zound district, where people suffer, starve and struggle to survive. Naturally, the inhabitants of the undercity with all their hearts hate those who look down on them, and this negativity periodically develops into a rebellion against the unjust system.

Piltover from bottom to top

True, the residents of the upper level of Piltover stop such protests against the established foundations quite quickly and cruelly, and in one of such confrontations, the two main characters, the little girls Wai and Powder, lose their parents, being left orphans in the care of the local leader of the inhabitants of the underworld, Vander. I will not tell you further, because someone clearly wants to watch the series on their own, but I will say one thing – the story looks in one breath, there are no narrative drawdowns or moments that you want to skip. For the modern TV series market, this is very rare. 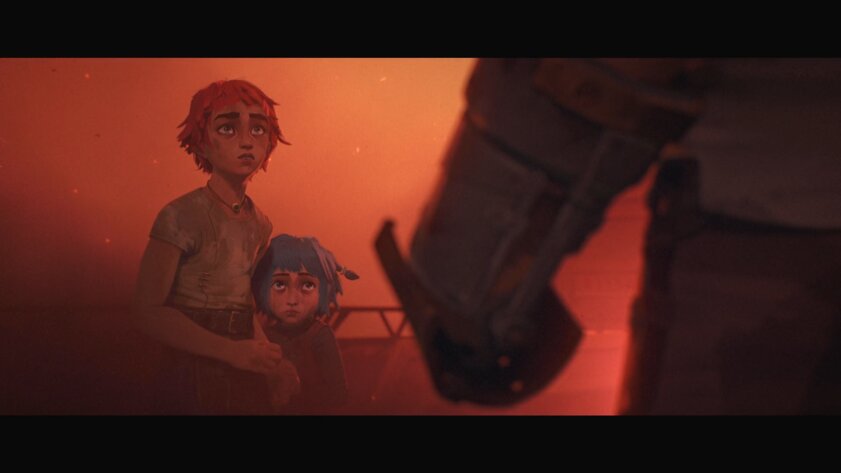 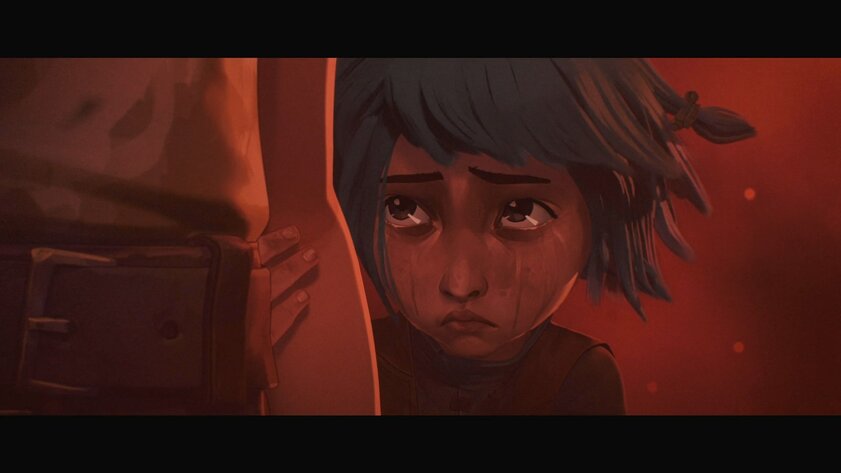 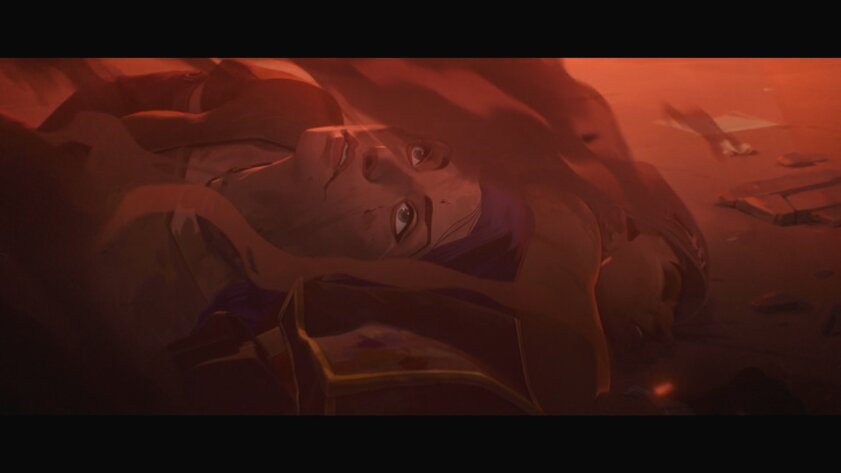 Interesting fact: the writers told the plot of the storyline without a single word – the characters will speak for the first time at 04:37

The best part is that you will understand the essence of what is happening even if you have never launched the League of Legends client, you do not know who Jinx is, what kind of fictional world it is, and why magic is intertwined with technology here. All the trick is in the plot, devoid of any elements of the narrative that will remain incomprehensible to those who are alien to video games and MOBAs in particular. This is just a cool story about a hard fate, inequality, cruelty and incredible courage to try to change at least something where everyone has lost hope.

No pawns on the chessboard

Surprisingly, in addition to Vai and Pauden, who are the cornerstone of the whole story, the authors of the project managed to devote enough time to all the minor characters so that they are remembered or evoke at least some emotions. Even in the first episode, when a team of heroes sneaks across the roofs to the inventor’s dwelling in order to rob him, a chubby boy in glasses surprised him with his acrobatics, and the scene with breaking the lock stretched a smile from ear to ear. There are more than enough such trifles that will evoke emotions every second of the timing (not always joyful, though) in Arcane. 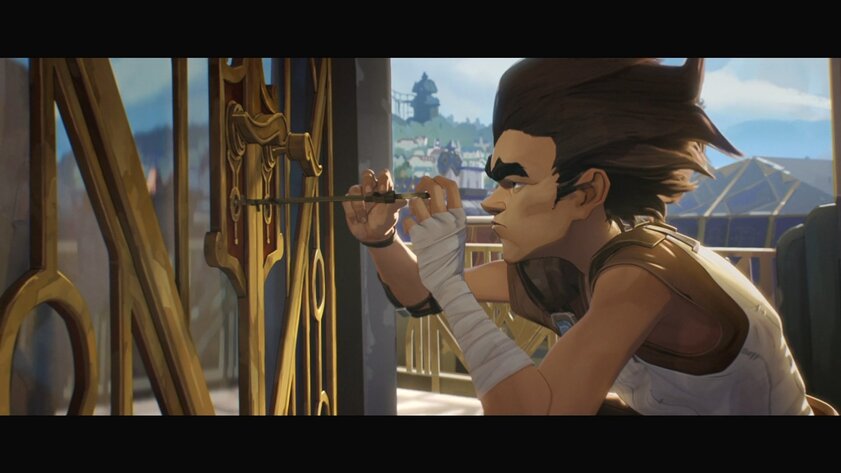 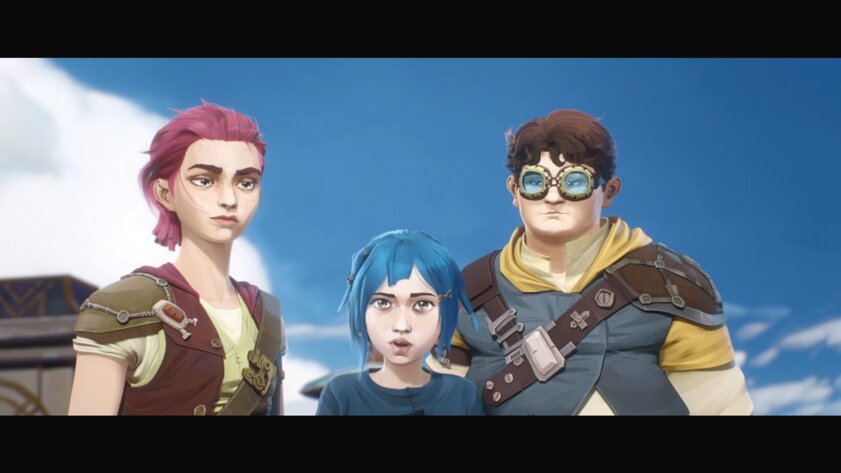 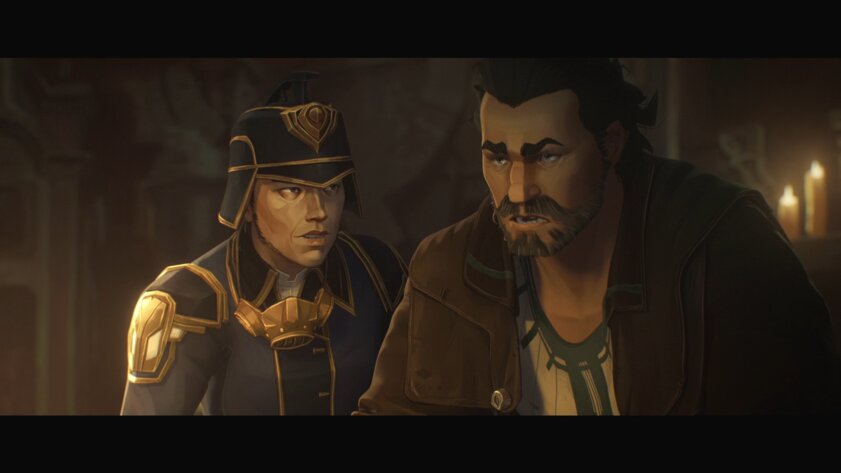 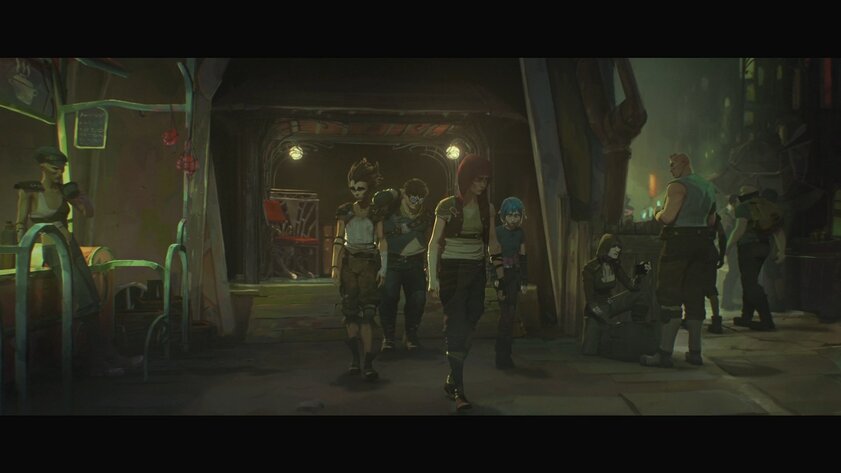 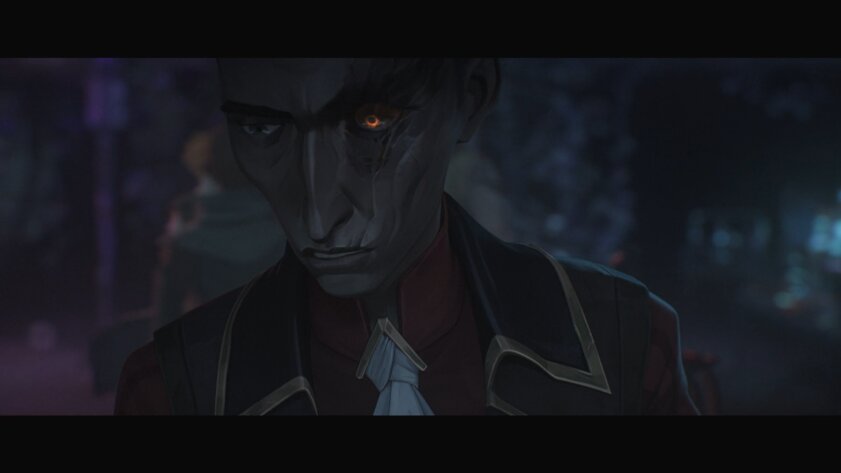 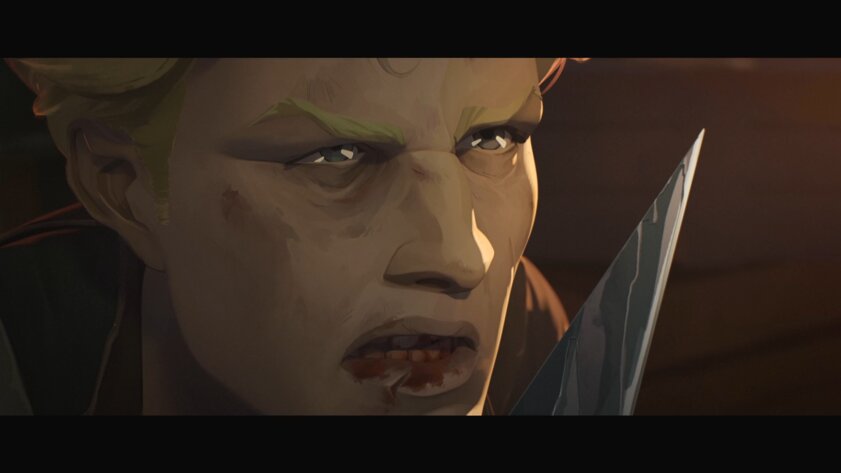 Dec 1, 2021
There are no memorable characters in the show. Huge rarity

At the same time, the relationship between the heroes, both the main ones and those whom you will see only a couple of times in three episodes of the first act, are written so vividly, humanely and pleasantly that you want to pause and shake hands with those who invented and implemented it. All conversations, views, situations, mutual assistance, jokes and jokes – everything looks real, as if you are not looking at an animated series with fictional characters, but at real life in all its glory. There is a place for jokes, funny situations and adventures, but sadness, blood and disappointment also cannot do without – in the virtual world, as in the real one, the white stripe will necessarily be replaced by a black one. And vice versa.

It’s scary to imagine how much it costs

The second most important reason Arcane put Squid Game in second place in terms of views is clearly the graphics. The visual series of the series is so good that even if you do not want to go into details, ponder the drama and relationships of the characters, just one picture will bring a lot of positive emotions and pleasure. In fact, the project demonstrates the layout of a picture drawn with a pencil or paints, which is “stretched” over animation familiar to cartoons. It probably sounds very simple, but in fact this is the most beautiful thing that I have seen in recent years.

It is better to see once than hear a hundred times

I would especially like to highlight three points. The first – the facial expressions of the characters are very realistic, it can easily make cut-scenes from expensive AAA video games, it is easy to believe in the emotions of the characters and imbued with their experiences. Second – the action scenes were drawn by real masters of the production, the immersion in the process is maximum, there is no feeling that something prevents you from enjoying every movement and animation. The third point – the detailing of the virtual world is simply amazing, you can at least pause every scene change and consider all sorts of little things on the screen that do not play an important role, but create the general atmosphere of what is happening. 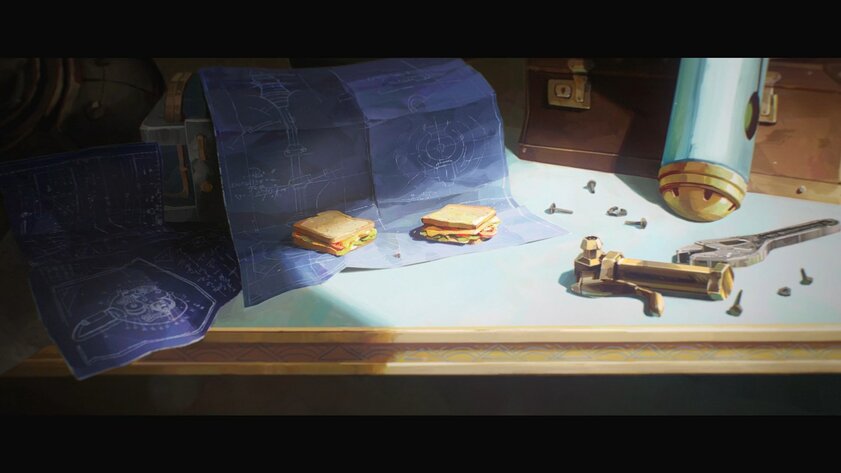 Someone saw a hammer here, and someone – two delicious sandwiches

And in detailing the virtual world, the scriptwriters went for a little trick – loyal fans of the game will see a little more in the elaboration of locations than those who have not played League of Legends. For example, Klaggor, the chubby kid from the first scene of the robbery, jumps across the rooftops in strange glasses with angular rims – exactly the same glasses Vai wears in the “League” in a standard skin. There are a lot of such Easter eggs in the series, but the trick is that if you do not know that this is a reference, then the plot or the general visual series will not be perceived worse anyway. It’s just that where gamers see a blueprint for Jace’s transforming hammer, non-gamers will look at the overall floor plan and enjoy drawing every pixel.

Netflix typically posts the entire season on release day, so subscribers can watch the story from start to finish without waiting. In the case of Arcane, the situation has changed – the project will be released in three blocks of three episodes, between which there will be an impressive time gap. First, we are shown teenage girls, in the second block Wai and Powder will grow up a little, what will be in the third is a mystery. The series’ authors need this storytelling tool in order to be able to tell the story of two League of Legends characters, about whom almost nothing was previously known, in a very short time. 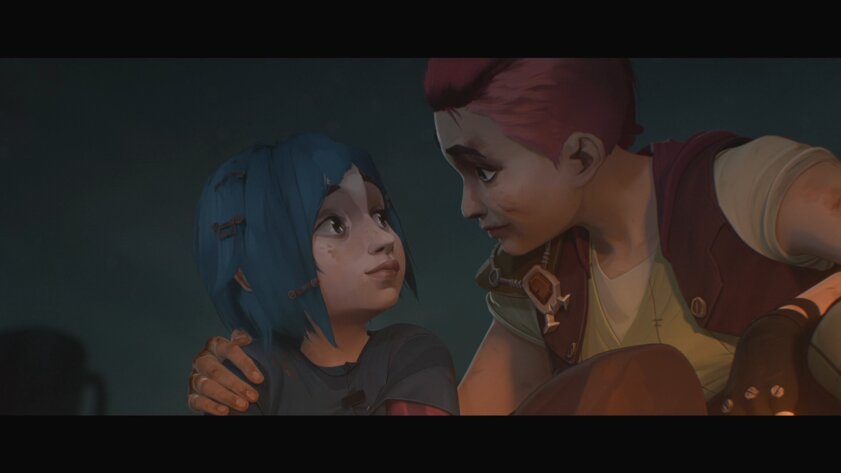 “And one day … we will begin to be respected”

And although now only three episodes are available for viewing, I can say with complete confidence that Arcane is a gorgeous animated series that will definitely appeal to fans of interesting stories and beautiful graphics, regardless of whether they have played League of Legends or not. This is a fairly independent project that, without being tied to the most popular MOBA in the world, would probably lose views and part of the audience, but it certainly would not get worse. And given its success, most likely, this will clearly not be the last release in this direction, so it’s time to brew tea and launch the first series.

Coronavirus – Belgium: Proposal to close nightclubs where measures cannot be complied with

The third generation iPhone SE will be released in the first quarter of 2022. Old…

Activision revealed a new map for Warzone: 15 points of interest in the 1944 setting

Jane Harper Dec 1, 2021 0
Germany reported the highest number of deaths from coronaviruses since mid-February this Wednesday (01), when…

Dec 1, 2021
Horror is caused by a video uploaded to TikTok through a room with students who are locked up and trying to escape…

Dec 1, 2021
Panic prevails in Turkey. The country's economy is collapsing, prices for all products have risen while Recep…
Prev Next 1 of 6,389
More Stories

In Russia assembled iPhone 13 Pro with components of the…

Swap between lanes and videos from around the world: Petal…