PSE: Record rise in exports in the pandemic – Jump 43.2% in September

The rising rally of Greek exports continues with undiminished intensity, which have entered a trajectory of rapid growth against the adverse conditions created by the coronavirus pandemic in world trade, according to the Panhellenic Exporters Association (PSE).

According to ELSTAT data, last September the value of Greek exports recorded another big increase of 43.2%, highlighting the key position of extroversion in the recovery of the Greek economy.

This is a record percentage during the pandemic and everything shows that, except for the unexpected, we are heading towards another historical record of extroversion at the end of this year. At the same time, a source of constant concern is the widening of the trade deficit by 27.8%, which amounted to 2.11 billion euros in September 2021.

Commenting on the above President of the Panhellenic Exporters Association, Mrs. Christina Sakellaridis, stated the following:

As during the multi-year financial crisis, which tested the resilience of the economy and society, so during the pandemic, Greek exports remain in the “front line”, contributing catalytically to the country’s recovery and return to normalcy. No one can underestimate the difficulties arising from the surge in energy costs and international commodity prices, factors that significantly burden the competitiveness of Greek products and undermine the effort to expand into new markets. “Great victories”, when there is the appropriate support from the State “.

More specifically, according to an analysis by the Panhellenic Association of Exporters and the Center for Export Research and Studies (KEEM), on the provisional data of EL-STAT, a huge increase is recorded in exports in September 2021 as they increased by 1.11 billion. 43.2% and amounted to 3.70 billion euros compared to 2.58 billion euros in the same month of 2020. Excluding petroleum products, the increase is smaller by 20 percentage points, as they amounted to 2.55 billion euros from 2.08 billion euros, ie increased by 475.7 million euros or 22.9%, which confirms the great importance of the significant increase in Greek exports of petroleum and fuel by 127.9%.

Similarly, excluding petroleum products, it is noteworthy that despite the pandemic and its effects, exports for the nine months of January-September are upwards compared to 2020, at 20.88 billion euros from 17.51 ​​billion euros, ie increased by 3.37 billion euros or by 19.2%.

The course of exports by geographical area

The course by industry

Regarding the large product categories, in September 2021, upward trends are recorded in all sectors without exception. 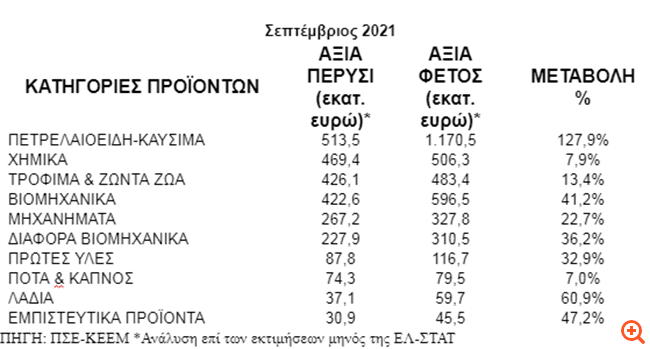 Examining the nine months January – September 2021, a significant increase is recorded by all major product categories, just as in the case of September 2021. 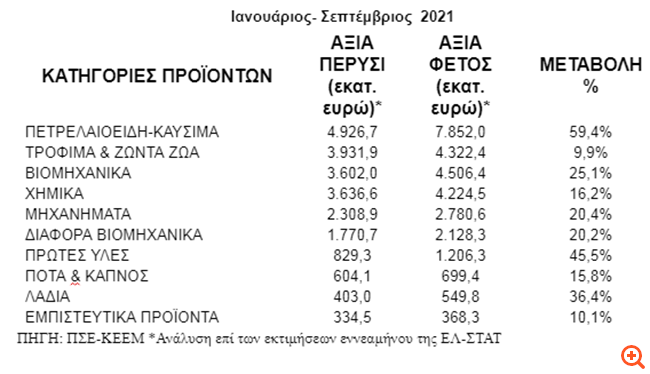 Halki in the era of energy transition

Michael van de Poppe allowed the price of bitcoin to fall to $ 49,000

Rihanna named national heroine of the Republic of Barbados

Clarence Nov 30, 2021 0
In the celebration of the birth of the Republic of Barbados, this Monday (29), the singer Rihanna was one of the…

Check out some of the most “spectacular” buildings of 2021

Nov 30, 2021
An impressive steel tower inspired by Van Gogh's brushstrokes. A cozy 3D printed house made from the…

Panic in Turkey over free fall of pound – “Traders sell…

Nov 30, 2021
The pound recorded a new historic dip today Turkey, losing more than 4% of its value in one day, against the…

Omicron Mutation – Scotland: Nine Cases Not Related to Trip to…

Nov 30, 2021
Her nine cases Omicron mutation of coronavirus located in Scotland All of them were connected with the same…

The Christmas present we needed: Channing Tatum confirms that he will…

Nov 30, 2021
Could it be that we have been good this year? Channing Tatum and director Steven Soderbergh will reunite once…
Prev Next 1 of 6,376
More Stories

Glassnode warned of the likelihood of a bitcoin squeeze in…