SELPE Survey: Deterioration of the consumer climate – Low expectations for the next 6 months

The 5th study to record consumer trends in retail was completed by the Greek Business & Retail Association through the six-month retail consumer climate research carried out with the scientific support of the ELTRUN laboratory of the Athens University of Economics and Business.

The survey took place in December 2021 through a Panhellenic Survey on a sample of 859 consumers. Particularly interesting conclusions and trends are recorded in relation to the buying habits of the public from the impact of the pandemic, while it also includes the index of retail consumer climate. 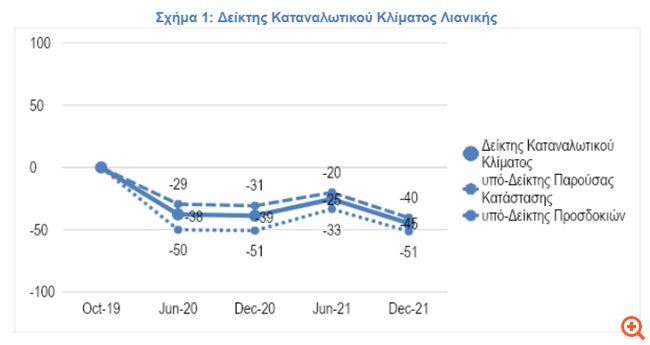 First, the retail consumer climate index (figure 1) in December 2021 stood at -45, reduced compared to the base month in October 2019 and reduced relative to the corresponding measurement of December 2020. As can be seen, this development It has less to do with the expectations of consumers so far, but mainly due to the current state of consumers for the near future.

Specifically, the decrease in the sub-Index of the current situation was from -31 to -40, while on the contrary the sub-index of expectations records the same low value as in December 2020 -51. In practice, what is recorded are fixed expectations, but a burden on consumers’ finances, something that has to do with increased energy costs as will be seen in other indicators.

In particular, as reflected in the individual questions (Figure 2), consumers consider that it is not a satisfactory time to shop, both themselves and in general. In fact, they classify it as the worst period for important markets in the last two years. 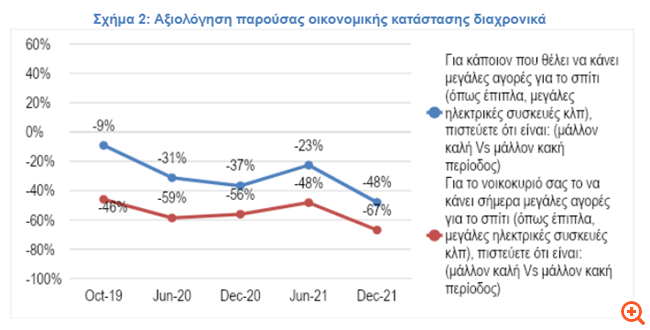 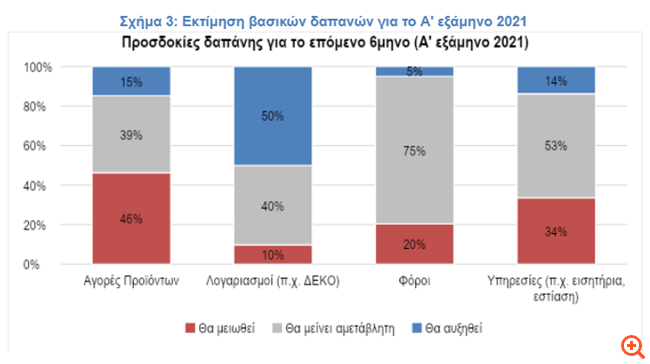 Expenditure expectations are also negative and directly related to increased energy costs. As shown in Figure 3, 50% estimate that in the first half of 2021, spending on utility bills will increase. On the contrary, 46% estimate that the expenses for product purchases in the first half of 2021 will be reduced, while only 15% that they will be increased. The same goes for services (tickets, catering) for which it is also estimated by 34% of the public a decrease and only 14% increase. The measurement is relatively positive in relation to taxation, for which 75% estimate that it will remain unchanged, 20% that it will show a decrease and 5% an increase. 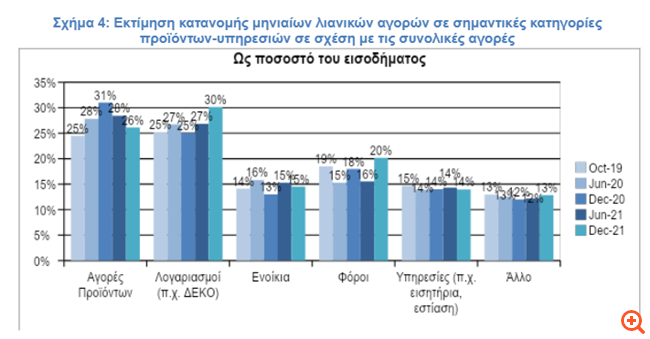 As shown in Figure 4, today, according to consumers, spending on accounts is by far their largest expense as a percentage of their income. Specifically, they are 30% compared to 25% last December. On the contrary, the expenses for product purchases are reduced compared to the previous December from 31% to 26%. In relation to the other categories of expenses, the expenses for taxes are recorded increased, but at normal levels for the month of December (as in the specific month are made income tax payments, ENFIA, traffic fees, etc.). Other expenses such as services and rents do not change significantly.

Specifically for the costs for purchases of products which is the main object of the study, it is noted that they now represent only 26% of the total costs. As shown in Figure 5, the main expenditure markets in terms of expenditure are food and beverages at 41% with a decrease of 49% in 2020 (Lockdown period). The focus which had recovered in the summer was in second place along with clothing is falling from 11% to 7% and hotel tickets from 4% to just 2%. On the contrary, the electrical-electronic items show an increase from 9% to 11%, which reflects the markets of the Black Friday period. In the other categories no large fluctuations are recorded. 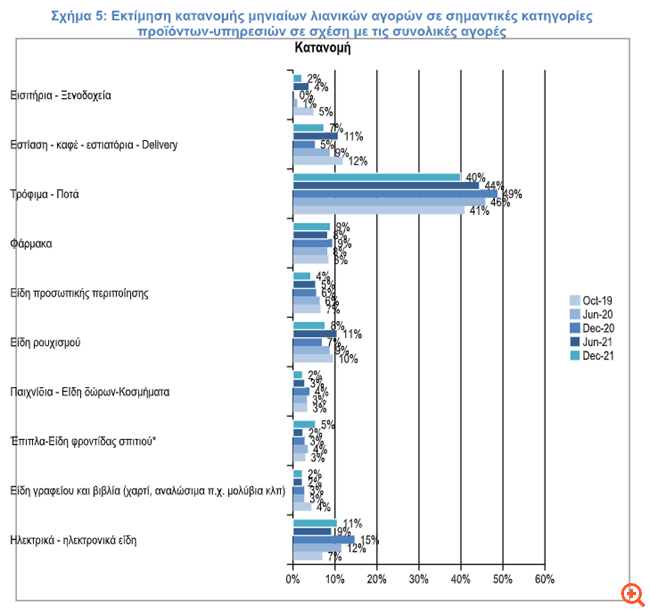 The results of the research record the significant change that occurred in the consumer public in the last 6 months, which mainly concerns the impact of increased energy costs and secondarily the impact of the COVID-19 crisis on the consumer climate and the retail market in Greece.

The Uruguayan Congress will consider a bill to regulate cryptocurrencies

One person injured after package explodes at US university

Digma has released TWS-16 wireless headphones: with an LED display on the case and a very nice price