Today, Citigroup made a significant change in its assessment of the course of the European economy, stressing that the worst-case scenario is now the main one for the region, with the deep recession hitting with certainty and noise. As it notes, its recent assessment of a mild recession in the eurozone has become overly optimistic with gas prices having risen a further 30% and key economic indicators pointing to a 2011/12 or even 2008/ 9. Policy action can still avert the worst, but a deeper recession and prolonged weakness will now be hard to avoid.

Thus, Citi reduces its forecasts for GDP growth for 2023 to -1% for the euro zone and -2% for Germany, while a recession of 0.9% is also forecast for Italy. A return to the pre-pandemic path of economic potential seems unlikely unless monetary-fiscal policy coordination brings about a significant acceleration of investment, as he underlines.

A deep recession is coming

In the wake of the escalating conflict between Russia and the EU, but also the lingering effects of the pandemic and tighter economic conditions, key economic indicators have hit new lows and point to a far worse outcome than a mild recession.

Over the past week and a half, almost all indicators of eurozone economic activity have taken a decisive turn for the worse. The composite PMI fell to 49.4, the European Commission’s economic sentiment index (ESI) to 99.0. Both were much weaker than forecast and broke above critical levels (50 and 100, respectively) for the first time since February 2021. Both remained far from recession territory, which we see at 48 and 95, respectively, but other key indicators suggest this is unlikely to last.

On July, Germany’s Ifo index, a good indicator for investment, bottomed out in the 2008/9 crisis. The growth rate of the tight M1 money supply (cash and overnight deposits of households and non-financial firms), adjusted for inflation, fell below -1% year-on-year in June. The last time this happened in 2008, euro area GDP contracted at a rate of 1% annually three quarters later.

There are many headwinds for the economy that are global in nature, Citi points out. These include the effects of the pandemic, such as ongoing supply chain disruptions or significant change in consumer demand. Global tightening of financial conditions due to expectations of central bank interest rate hikes are also playing a role.

But the geographic distribution of the shock clearly shows that the shock originates in northeastern Europe. This suggests that the main driving force behind European developmental weakness is ultimately the conflict with Russia. It has caused a sharp rise in energy costs, increased uncertainty, caused new supply disruptions and reduced trade. The first two headwinds in particular are now significantly exceeding Citi’s expectations immediately after the invasion of Ukraine at the end of February. So avoiding recession is no longer the main scenario.

The dip in consumer confidence to new historic lows in July remains particularly impressive, emphasizes the American bank. Although business confidence is beginning to catch up with consumer confidence, the gap between the two remains historically high. “We are particularly concerned by the data from the German GfK survey this week that households may increase saving. The survey tends to correlate well with Germany’s actual household savings rate and currently shows a recovery in savings from around 12% of disposable income to near pandemic levels of 20%, he notes. This time, it is voluntary rather than forced saving, which makes it less likely that it will be spent in the short term. It could mean that households are responding to rising prices by saving more for retirement. Precautionary savings in a recession and fears about job security may also play a role.

“The evidence is therefore overwhelming that Europe is headed for recession, and not just a mild recession,” Citi warns.

A sharp decline in Russian natural gas supplies has raised prices and uncertainty. Mandatory cuts in Germany’s natural gas consumption combined with the EU’s solidarity plan would be costly in terms of production, but would tip the balance and arguably improve the current course of maximum uncertainty.

Unfortunately, however, the EU gas solidarity plan has not had the desired downward impact on prices (TTF prices increased by 30% over €200 per MWh between July 20 and July 27). At this price, the cost of Germany’s natural gas consumption in 2021 would be almost €200 billion (just under 6% of GDP), compared to just €10 billion (0.3% of GDP) in 2019. For the EU as a whole, costs will rise from 0.4% of GDP to nearly 7% of GDP, for Italy from 0.4% of GDP to 9% of GDP. Long-term delivery contracts, consumption reductions of around 10% already this year as well as the possibility of passing on part of the cost increase through export prices reduce the impact somewhat, but the change in Germany’s trade balance from €212 billion in 2019 to probably around €30 billion this year, a variation of 5% of GDP, suggests that protection is not great.

The worst case scenario became the basic one

A mild recession or an end to the conflict with Russia now seems unlikely. The most likely scenario now is what Citi had recently pegged as the worst – either a somewhat controlled deep recession or a further split of the EU that would leave Russia in control of the crisis, prices and uncertainty high and the economy possibly in a very deep recession.

If it tries to replace Russian gas and reduce consumption and Russia reduces supply to very low levels, Europe will likely not reach 90% storage levels until the fall. When consumption picks up seasonally in October and November, it could be too late for soft energy bills, leaving Europe dependent on significant gas flows from Russia. The conflict in Ukraine could then further escalate as Russia capitalizes on this exposure. In anticipation of this, business and consumer confidence have already taken a dive and may remain near record lows, with natural gas prices at record highs.

However, as Citi points out, by immediately reducing consumption, including mandatory reporting and the implementation of the solidarity scheme among EU members not directly exposed to Russian gas, natural gas reserves could more easily be covered at the 90% limit by October and to end Europe’s dependence on Russian gas during the winter. The economic hit in this case is still 1-2% of GDP compared to scenarios where a reduction in consumption can be avoided, i.e. a deep recession is inevitable. But if the EU reduces gas consumption before any Russian move to cut off gas, Citi estimates that gas prices will fall and uncertainty will ease. In this scenario, Europe and the US could more easily impose a price cap on Russian gas as well, as is reportedly planned for December, or impose tariffs on Russian gas imports.

“A return to the path of GDP to pre-pandemic levels now appears unlikely unless coordinated monetary and fiscal policy unleashes a very large increase in investment. Given the ECB’s focus on inflation, Germany’s focus on fiscal discipline and the constraints of rising borrowing costs in the region, we wouldn’t…put our money on such a development,” Citi concludes. 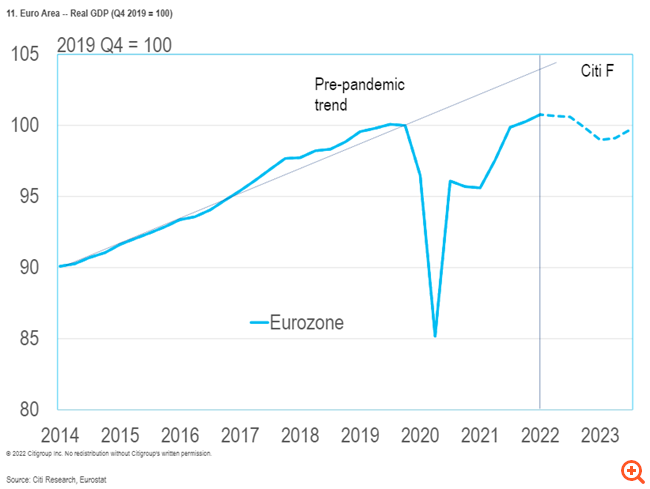 Netherlands: On November 17 the verdict on the Malaysia Airlines plane crash

Do Kwon: “Crypto is still like the wild west”