Soltz: Together we support Ukraine

The G7 conclusions were presented by Olaf Solz. Disagreements over the imposition of a ceiling on the price of Russian oil, although a reference was included in the announcement. Baton in NATO. 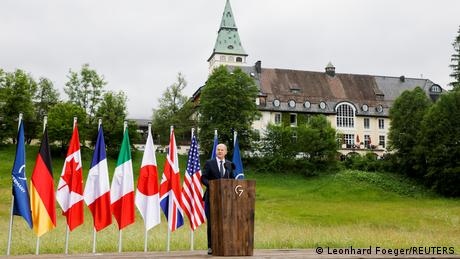 A strong message of unity and determination against Moscow’s aggression, but also a message in favor of strengthening democratic values ​​against authoritarian tendencies, was sent internationally by Chancellor Olaf Soltz, host of the G7 summit, which ended at noon in the Bavarian Alps. After condemning once again the bloody attacks of the Russian army in the last days in Ukraine, he stated:

“Putin must not win this war (…) We will continue to increase economic and political pressure on Russia (…) We want Ukraine to be able to defend its sovereignty, its independence and its democratic future “. “Our next task is to make sure that this war ends and that Russia withdraws its troops from Ukraine.” However, when asked by DW during a press conference about the provision of security guarantees – and in what form – in Ukraine, he declined to answer.

In addition to continuing military assistance to Ukraine for as long as needed, the leaders of the seven strongest industrialized nations have provided Elmau with further financial support to Ukraine on several levels: $ 28 billion will be channeled into the Ukrainian budget for An additional € 2.6 billion will be sent in the form of humanitarian aid, with around € 5 billion earmarked to tackle global hunger, with a particular focus on the food crisis threatened by Russia’s “blockade” of Ukrainian grain exports.

Against the backdrop of the Bavarian Alps, Chancellor Soltz also reiterated the German proposal for a new “Marshall Plan” for the future reconstruction of Ukraine, modeled on the historic US plan to rebuild Europe after the end of World War II. It will be a “colossal project” that will take years to implement, he said, adding that Germany is already working with the Commission on the idea.

Will they agree on a ceiling on the price of Russian oil?

But the big issue, at least economically, was the leaders’ discussions on further tightening sanctions against Russia. In this context, the issue of imposing a maximum price on Russian oil was raised, an additional measure against Moscow that the US is pushing for, while the EU seems hesitant – as is the issue of an embargo on Russian gold, to which the EU directly objected to.

The G7 joint statement eventually included a general statement: “We will look into further measures to prevent Russia from taking advantage of its aggressive war. As we gradually withdraw Russian oil from our domestic markets, we will expand. “solutions that meet the goal of reducing Russian hydrocarbon revenues but also of ensuring stability in global energy markets.”

The American G7 and the awakening of “Sleepy Joe”

The United States has said it is ready to impose additional $ 2.3 billion in tariffs on 570 Russian products, and is also considering sanctions that would prevent the Russian defense industry from gaining access to essential raw materials and equipment. However, according to commentators and observers, the German G7 was ultimately American, with President Joe Biden setting the agenda and paving the way for the rest of the world to face Moscow.

In fact, according to analyzes in the German press, the so-called “Sleepy Joe” in the USA seems to have “awakened”, claiming a leading role for the USA in the 21st century, at least in the field of international politics and diplomacy. And all this, of course, at a time when the United States is facing serious economic and social problems.

However, Olaf Solz, when asked by a reporter whether he was merely the “coordinator” of the G7, when the decisions were made by Joe Biden, simply chose to emphasize the intensification of Euro-Atlantic and American-German cooperation. From now on, everyone’s eyes are on Madrid and the NATO Summit, which is taking over from the G7. Dimitra Kyranoudi, Berlin