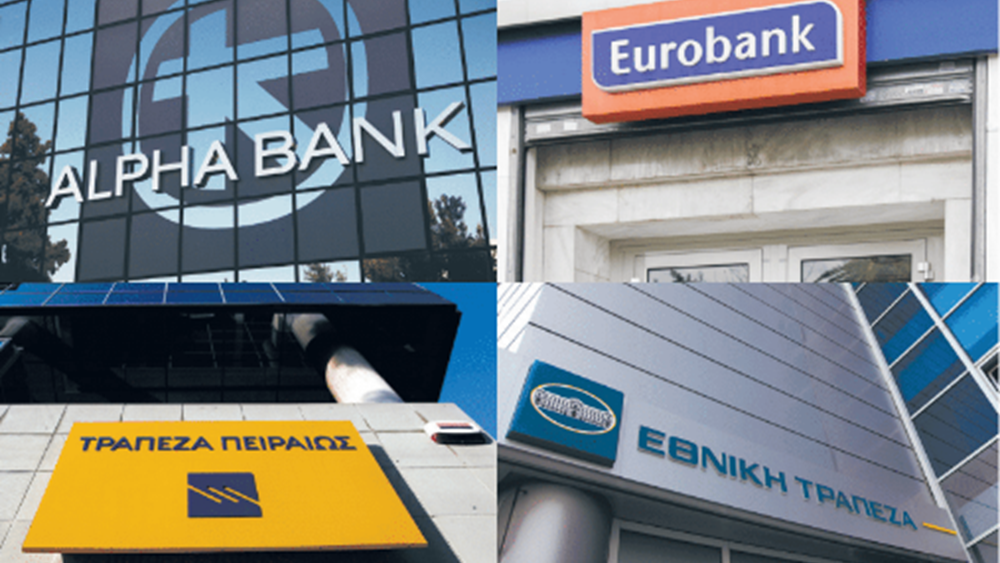 They say a picture is worth 1,000 words. This is true everywhere, with the possible exception of the nine-month results of the four systemic banks.

The first glance raises concerns, with a few exceptions, about profitability, capital, costs and red loans, despite the huge securitizations that have taken place.

The second look confirms the optimism and ambitious goals of the banks for dynamic support of the real economy in 2022 from a stronger and healthier base.

Starting from the basic, ie the income of the banks, there is a small decrease in the nine months of 2021, compared to the corresponding period of 2020, with the exception of Piraeus Bank.

The analysis of operating income per bank gives a more complete picture. With the exception of the National Bank, the other three systemic banks showed a slight decrease in interest income. All of them showed an increase in commission income, while the contribution of trading income was significant for Piraeus and Ethniki banks.

The decrease in interest margins and interest income is due to the following factors:

1. First, from large securities-sales of red loans, whose transactions, ie derecognition from the balance sheets, took place within nine months. Even if the loans are in arrears, the banks record income from the unpaid installments (accruals). Upon derecognition, ie the exit of these portfolios from the balance sheets, this income ceases to be recorded. Therefore, this reduction is more accounting than substantial. Eurobank was affected by the securitization of Mexico (3 billion), Alpha Bank by the securitization of Galaxy (10 billion) and Piraeus by the securitization of Phoenix / Vega (7 billion in the second quarter) and Sunrise 1 (7 billion). in the third quarter). At the National Bank, the full impact of the Frontier securitization (6 billion) has not been recorded, although it has been completed, as forward moves had been taken and the derecognition would be formal in the fourth quarter.

2. Secondly, loan repayments were higher than new loans which exceeded the target of 15 billion for 2021. Thus, the stock of interest-bearing loans decreased. A significant part of the repayments came from large companies that exchanged bank loans with bond issuance due to the favorable conditions in the markets. In households, repayments remain higher than new disbursements and, as a result, credit expansion remains negative.

All the above factors are reflected in the interest rate index, which decreased for all except the National Bank, but also in the amount of loans. This is lower than the corresponding nine months last year, despite the new loans, due to securitizations and repayments. The positive result of all this is that Greek banks today may have fewer loans in their portfolios, but from them they generate real income (serviced) and in addition require less provisions due to lower risks.

Revenue from trading and commissions

All banks showed an increase in commission income and charges from cards, payment systems and the network. Here, perhaps, it should be noted that this revenue may not be as large from 2022, due to sales of card systems. Eurobank sells 100% of the card system to Worldline, Piraeus 100% to Euronet, while Alpha Bank and the National Bank maintain about 50% in a joint venture with Nexi and EVO, respectively. Of course, savings, partnerships, and trade growth, in general, can offset sales losses.

Another element of revenue is that coming from trading, mainly bonds. This is more evident in Piraeus and Ethniki, which represents almost half of the interest income. The composition of revenues, however, has to do with the strategy and personality of each bank. For example, Eurobank has three main sources of income, from Greece, real estate and international activities, while emphasizing wealth management everywhere. Piraeus emphasizes wealth, while Alpha Bank focuses more on corporate, while it is in the process of restructuring its subsidiaries abroad. Piraeus and Ethniki rely more on activities in Greece, in business and retail banking. This does not mean that not everyone emphasizes all areas such as private banking, shipping, etc.

If we look at the profits before taxes we will see big losses, mainly in Alpha Bank and Piraeus. But this size does not exactly tell the truth, because they are borne by the transaction costs of Galaxy and Sunrise, respectively. Securitizations also cost capital.

Therefore, we need to look at net pre-tax profits which are not only positive, but higher than the banks’ original targets. This is why they revised upwards the profitability targets for 2021 and 2022 to analysts when presenting the nine-month results. In addition, it is a one-off cost, which is at the same time associated with the permanent elimination of risk and, consequently, the reduction of frozen funds. Therefore, it was a one-time cost of consolidation and empowerment.

The costs, which also determine profitability, were borne by other burdens, again, of a consolidation and restructuring nature, such as volunteering, store closures, reorganizations, splits, etc. For this reason, the cost-to-income ratios are somewhat high.

Quality of loans and funds

Red loan rates are coming in, perhaps higher than one would expect, with the exception of Eurobank, which came in first in single digits. Here, the important thing is that these percentages are pro-forma which means that they will close much lower in the year and will be found for all banks in single digits at the beginning of 2022 and below 5% and close to 2% later. Also, the increase in provisions, despite the decrease in red loans, something that shields them more, but gnawed at profitability.

In terms of capital adequacy ratios, they all have higher rates than the thresholds. The overall index is close to 16% -19%, while CET1 is around the European average, ie 12% -13%. The CET1 index is a little lower for Piraeus, which, as it has stated in presentations, it is its own strategy to keep this index well above the minimum threshold and between 8% -11%.

Finally, it should be noted that the capital adequacy ratios will increase as soon as the negative effects of the loan securitizations expire, but also of the effects of the transition to the new accounting standards and the rules of Basel III. The BoG has calculated that only the new IAS and Basel cost at least 3 percentage points on the funds. 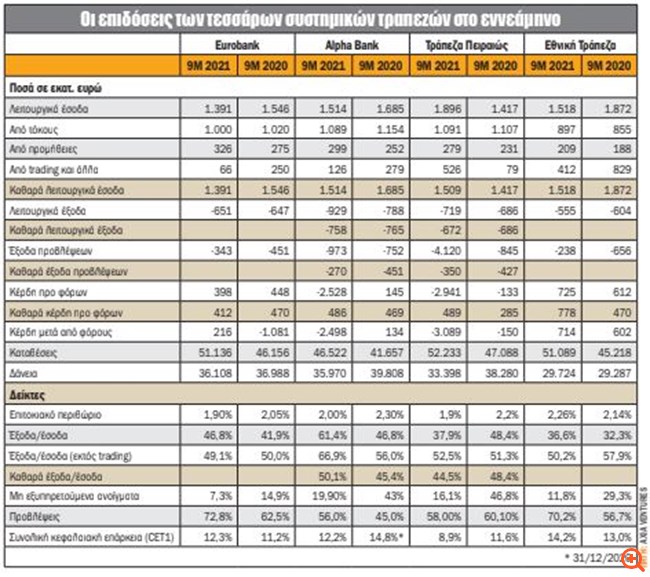