In August, trading volume on spot platforms reached $1.87 trillion, while in July the figure was $1.69 trillion. The increase in trading volume by 10% was the first in recent months.

According to the data provided by the team of Chinese journalist Colin Wu, Binance exchange remains the leader with $441 billion (+1%), while BitMart (+19.2%) showed the maximum increase. At the same time, out of the 16 largest exchanges included in the study, exactly half of the sites showed a decrease in trading volume. The largest drop was recorded on the Bitget exchange (-37.8%). 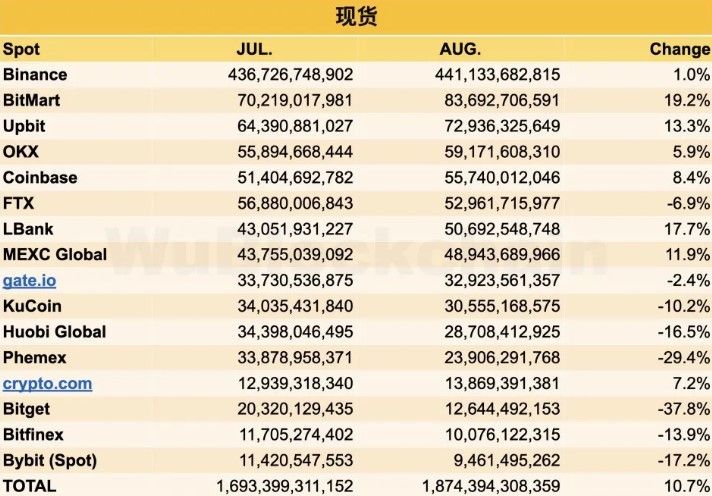 But the cryptocurrency futures market in August decreased by 2%. Trading volume was $3.4 trillion, of which $1.58 trillion was traded on Binance (+1.6%). The growth of the indicator was recorded on only four sites, and the Crypto.com exchange increased the volume of trading in futures by 138.4% at once.

As for the site traffic of cryptocurrency sites, the indicator decreased by 2.6% over the month. Russians are leading in terms of attendance on the Bybit, Gate.io, OKX and Huobi exchanges. On the Binance exchange, users from Russia make up 6.3% – this is the second figure after Turkey.

Recall that in July the volume of trading on centralized cryptocurrency exchanges decreased by 1.7%.

- Advertisement -
Share
Facebook
Twitter
Pinterest
WhatsApp
Previous article
Watch the coronation ceremony of Charles III as King of the United Kingdom live
Next article
Turkey’s Ambassador to Greece: We don’t need wars to remind us that we are neighbors

Christmas dinner will be 16% more expensive in 2022, points out survey