The USD/CAD bounces off the 50 day EMA at 1.2830 and approaches 1.2870 in Monday’s session characterized by tight liquidity conditions as North American traders are on long holiday due to the US Independence Day celebration. At 1.2867, the USD/CAD is down 0.11% at the time of writing.

Sentiment is mixed, slightly tilted towards risk. In the currency complex, safe-haven partners remain heavy, with the exception of the dollar, which is higher against its major counterparts. The Canadian global manufacturing PMI for June fell to its lowest level in 17 months, to 54.6 from 56.8. According to Shreeya Patel, an economist at S&P Global Market Intelligence, “Global supply issues and strong price pressures were at the heart of the matter and are expected to continue to disrupt the manufacturing economy this year.”

Later, the Bank of Canada (BoC) Business Outlook Survey shows near-term inflation concerns are rising and expected to be higher for longer than in the first-quarter survey. According to the survey, companies plan to raise wages, hire and retain workers, and expect inflation to exceed 3% on average over the next two years.

USD/CAD edged lower, but as the American session progressed, it gained ground and hit a daily high around 1.2902 before pulling back to 1.2870 amid a lack of further momentum, which could threaten USD/sellers. CAD around 1.2900.

Meanwhile, high crude prices were of little help to the Loonie, whose imports account for 10% of Canada’s GDP in a year. Western Texas Intermediate (WTI’s) rose almost $2 to settle at $110.33 a barrel, capping USD/CAD’s gains.

In the coming week, the Canadian economic docket will feature the Trade Balance and important employment data. In the US, data will be released that could shed some light on the US economy, led by May Factory Orders, ISM Non-Manufacturing PMIs, Fed Speakers and the US Non-Farm Payrolls report.

USD/CAD has a medium-term bullish bias, but last Friday’s price action formed a huge inverted hammer in an uptrend, and the Relative Strength Index (RSI) accelerated lower to the midline and opened the door to new losses. 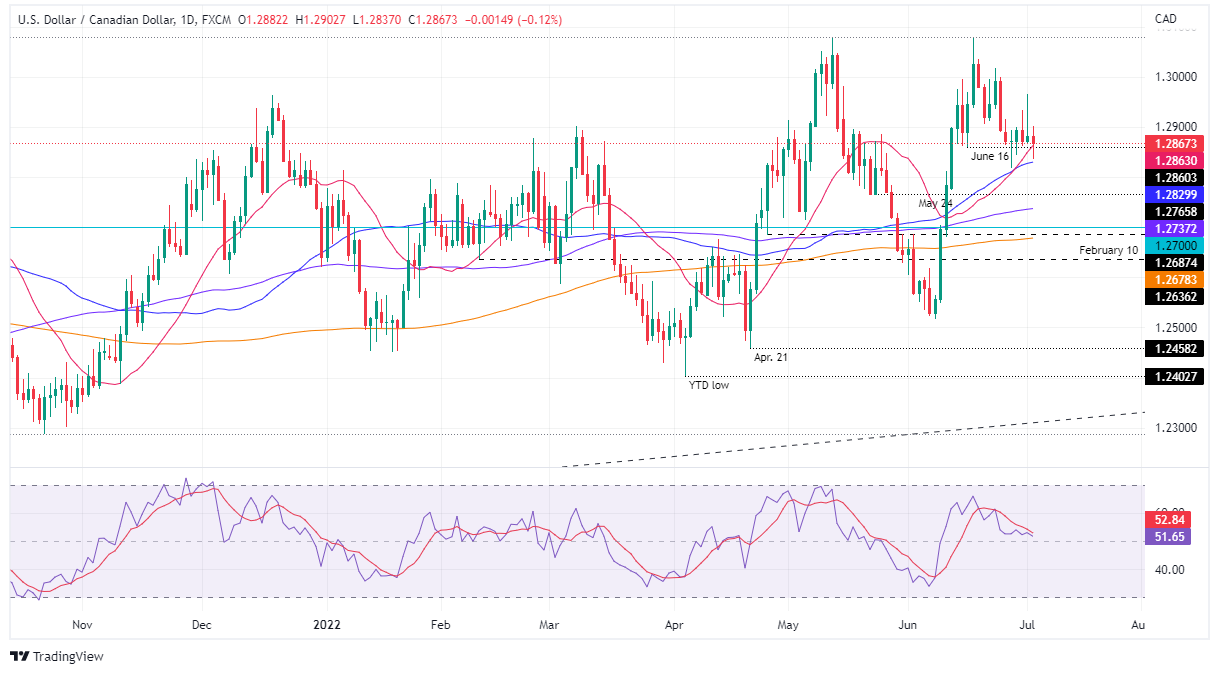