Why no one cleans up millions of dangerous debris around the planet. And then the politics

Space debris in Earth’s orbit is human-made non-functional objects that revolve around our planet. These include failed satellites, used rocket boosters and various debris that can never again serve a useful purpose. As of 2021, there were a lot of space objects in the orbits of the Earth (and now there are probably more): 130 million 0.1-1 cm in size, 900 thousand 1-10 cm in size and about 34 thousand larger than 10 cm.

With the help of ground-based radar and optical means, scientists track some of them – however, about 10% of the total. Moreover, among the monitored objects, only 6% are working devices.

Approximate map of objects in Earth’s orbits. Active satellites are marked in orange, everything else is space debris of various categories | AstriaGraph

Why is space debris dangerous?

The main danger is an obstacle to the flight of existing active satellites, which can be damaged or completely destroyed in a collision. A similar problem applies to future space launches: new rockets can simply crash into the debris of artificial space bodies, which is why the entire expensive mission will fail before reaching the destination. 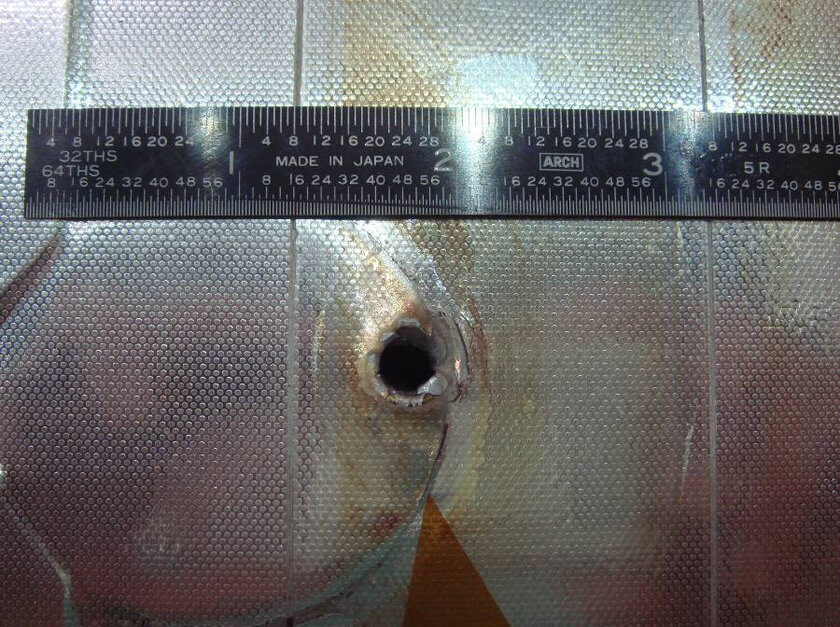 During the STS-18 mission, the US space shuttle suffered severe radiator damage due to space debris. The inlet was 5.5 mm, but the outlet was twice as large

In addition, some debris contains dangerous chemicals that, when burned in the atmosphere, can destroy the ozone layer – according to Roscosmos, up to 150 tons of space debris falls to Earth every year.

debris larger than 1 cm in diameter (at least in low and medium orbits). Modern spacecraft and satellites are equipped with a Whipple shield (a thin screen located some distance from the body), but it is only useful against debris up to 1 cm in size – and it cannot protect the solar panels used in satellites.

If the trajectory of space debris is known in advance, satellites can fly around it. But more often than not, scientists don’t know about debris in space.

If all the old spacecraft would simply shut down and continue on their usual trajectory, space debris would become so dense that spacecraft would not be able to break through it without damage. Fortunately, scientists have long foreseen this problem (even at the time of the launch of the first satellites in the 1950s) and eventually decided to put failing devices on the so-called disposal orbits.

Geostationary satellites (which are above the equator and remain stationary relative to the Earth’s surface) are put into a disposal orbit located 200 km above the geostationary orbit (it is calculated separately for each device) – to reduce the likelihood of a collision and make room for active satellites.

The burial orbit of military satellites with nuclear reactors is lower – about 650-1000 km. According to scientists, the Earth’s gravity will pull them after 2 thousand years, but until that time they are at a safe distance.

Despite the precautions described above, there is a problem – spacecraft are not always able to be put into disposal orbits (for example, when they unscheduledly fail or collide with other satellites unscheduled). However, the use of anti-satellite weapons (ballistic missiles or interceptor satellites) is one of the most important events that increased space debris. tracked space debris was formed as a result of 12 such “experiments”. 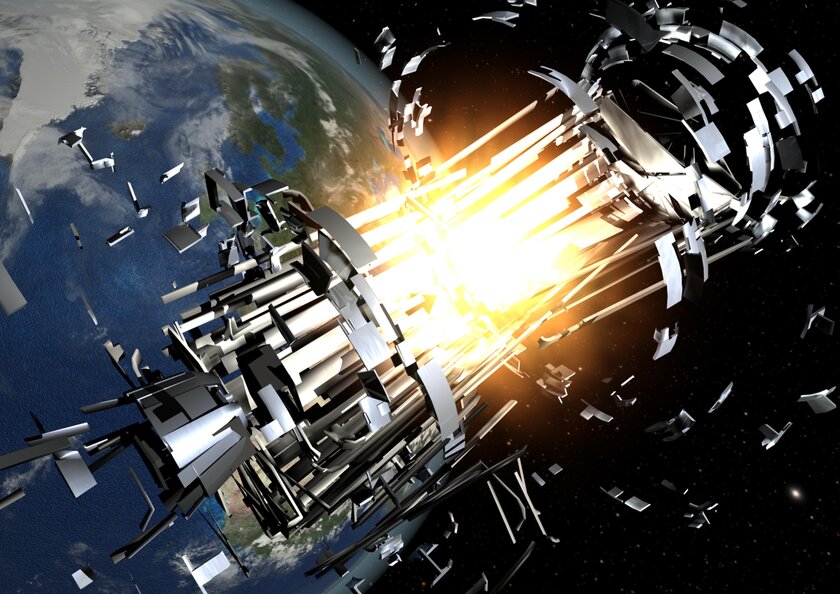 Failed missiles don’t always just “fade out”. Sometimes their death is accompanied by an explosion and, as a result, the formation of many fragments

Now scientists have several methods for assessing the responsibility of countries in the generation of garbage – in 2021, experts used two popular ones at a conference in St. Petersburg. According to one of them, the contribution of China to the appearance of space debris was 40%, the United States and Russia – 25.5% each, and the share of all other countries – 7%. Russia leads the way in the second method: 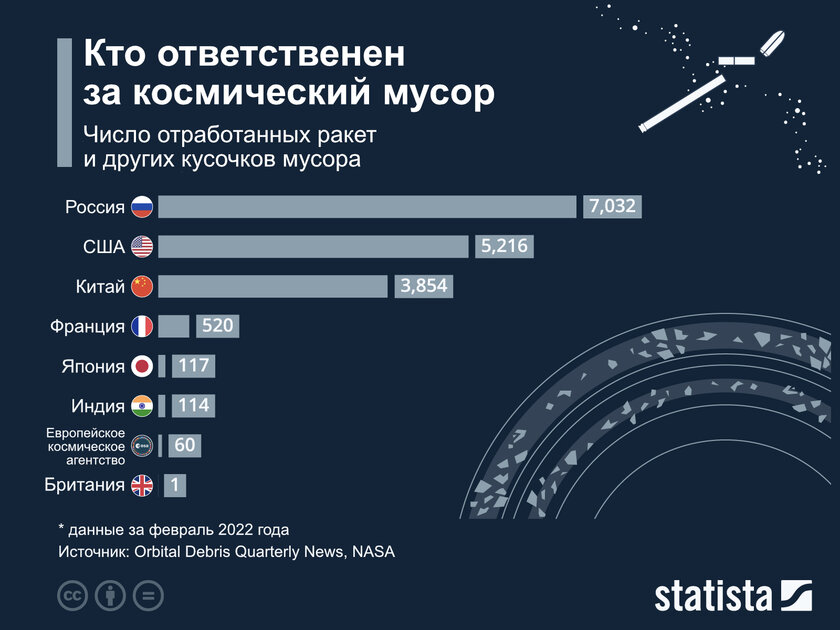 Be that as it may, all assessment methods indicate that the biggest “culprits” in the formation of space debris are China, the United States and Russia – each of these countries “litter” more than all the others (except the leaders) combined.

Why is space debris not removed?

Above, only the main dangers of space debris were mentioned, which are now worrying scientists the most. However, there are others – for example, the risk of the Kessler effect. According to this theory, the greatest danger in the collision of vehicles flying in orbit is caused by the domino effect: if large objects collide with each other, a large number of fragments can form, which in turn can collide with other space debris – this can form a chain reaction that causes the appearance of everything. new and new debris.

Objects in space can travel at high speeds, enough to smash a colliding object to pieces.

Given all this, the almost complete lack of action on the part of humanity to clean up space debris may be strange. However, there are explanations for this, and several at once.

1 reason. It is technically difficult to remove

Not only is it difficult, but it is not entirely clear how to do this in principle. And effective measures to eliminate it in orbits above 600 km (where there is no cleansing effect from braking on the atmosphere) have not been invented at all. Experts from different parts of the world offered a variety of ideas, but all of them, in fact, remained at the stage of concepts or failed projects. Scientists had a variety of options:

In technical terms, all these ideas were united by one thing – if something does not go according to plan, there will only be more space debris. Even the idea of ​​a laser hasn’t gotten around this problem: a beam that’s too powerful can break debris into small pieces, which will only make matters worse. 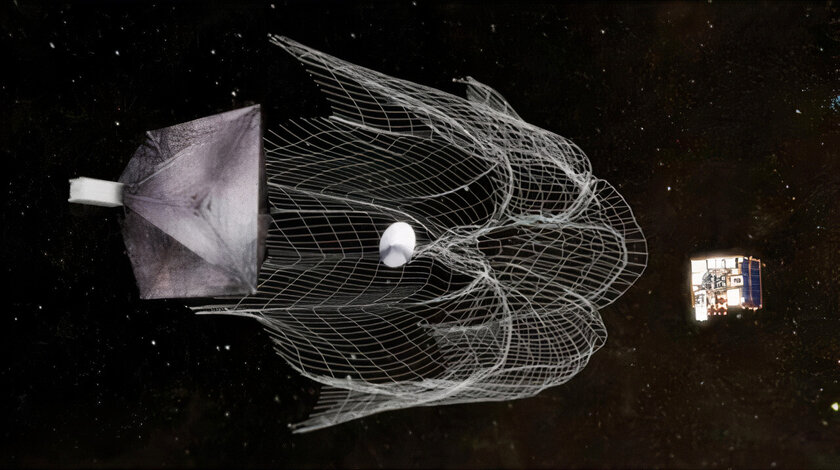 The garbage collector would work something like this: a net (similar to a fishing net) is fired at the wreckage, on the back of which there is a silver catching sail – it also has an engine that can pull the collected

In addition, all methods are focused on eliminating large elements (like failed satellites or parts of them that have not been destroyed), although small ones can also become a big problem.

2 reason. Any of the proposed methods is very expensive

Space organizations do not always have funds even for missions useful to mankind – it is not surprising that the issue of cleaning up space debris is not in the foreground. The cost of the above conceptual missions cannot be found in open sources, but it can be safely assumed that each of these methods is more expensive than the usual launch of satellites (taking into account the development and testing of innovative technologies that would be used for garbage collection).

3 reason. (Geo)political – satellites and debris belong to their creators

This is the most non-obvious, but no less important problem compared to all the others. Not only active satellites, but also their non-functioning remains, as well as debris (even posing a danger to other space missions) legally belong to the organizations that created / launched them.

In addition, it is this problem that exacerbates all of the above – recovered satellite fragments can be an object of national security of the countries that launched them (or at least secret intellectual property), which is why all missions to clean up space debris can be directed to eliminate only their own satellites, rockets and their debris. This greatly complicates the work of scientists (after all, you need to track down and capture only your own garbage without touching someone else’s), as well as the cost (the more complex the technology, the more expensive it is).

Things will only get worse in the future

The search for a solution to space debris has stalled, but the risk of negative consequences is steadily increasing: existing satellites can be damaged, new spacecraft are constantly being launched into orbit. 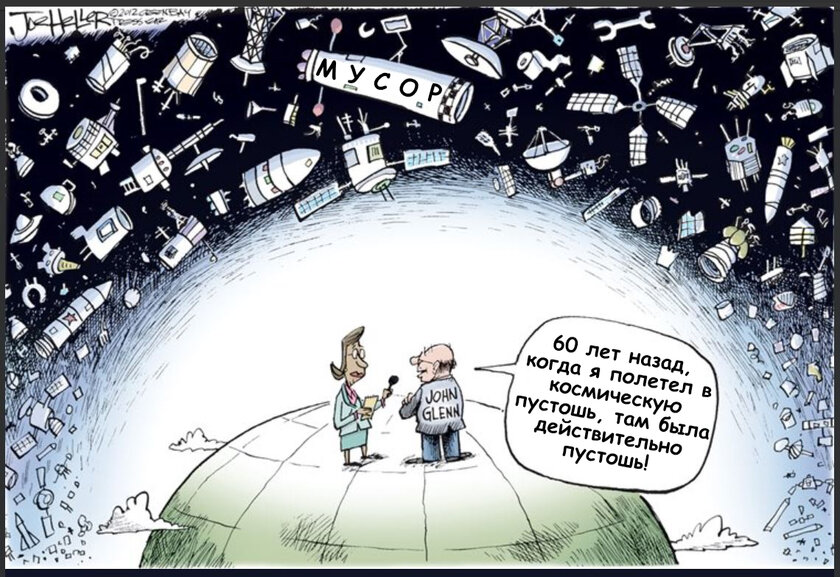 Here I recall at least the Starlink project from Elon Musk to provide satellite Internet to different parts of the Earth. It provides for the launch of at least 12,000 satellites (up to 42,000 in a successful scenario) into low Earth orbit, the first missions have already been successful – in 62 launches, the Falcon 9 launch vehicle launched 3,291 satellites into orbit.

If we consider that at least 15% of the minimum required satellites will fail unscheduled during operation, 1,800 space debris objects will appear in orbit, which, during collisions, form much more debris and particles. 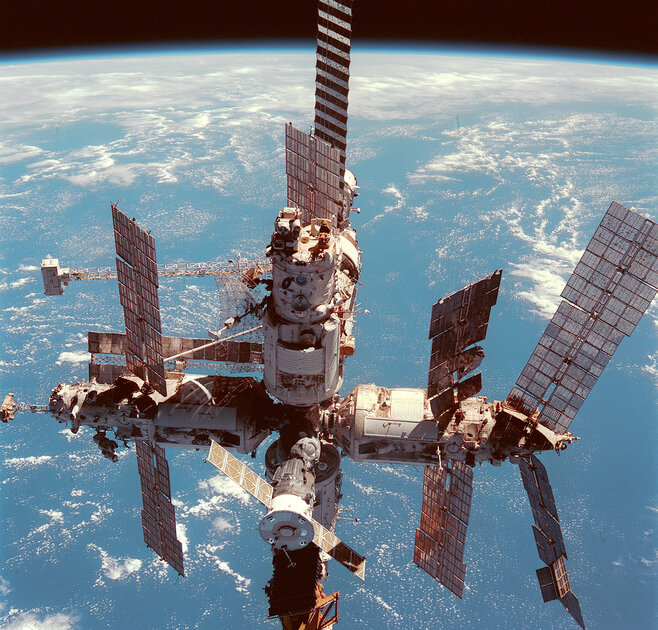 This is the Mir orbital station from the USSR. On the right, the damage to the solar panel due to space debris is most visible.

Even if some of the countries come up with an innovative and inexpensive way to destroy space debris, its implementation will be hampered by the legal (political) problems described above. The United States, China and Russia (as well as others) should first of all settle the issues of international space law, but now this does not seem to be feasible – there are enough problems on Earth as well.

Cyprus: Nicos Anastasiades had a meeting with the Prime Minister of Lebanon