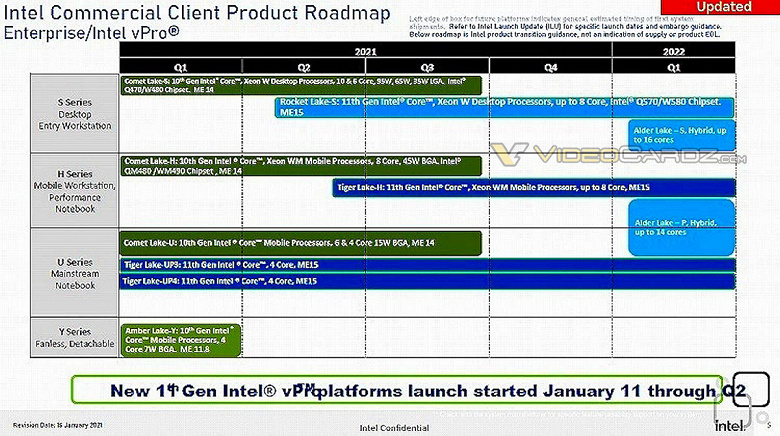 The source has at its disposal a schedule for the release of Intel processors with support for vPro technology. Although the document is not the most recent – it is dated January 16, 2021 – this is the most relevant information on this matter. According to “slides, Alder Lake-S and Alder Lake-P processors should be released in the first quarter of 2021.

The source recalls that we are talking about vPro processors, which are designed for the corporate segment and are characterized by enhanced security, support for remote management and extended validation and availability periods.

The graph confirms that Alder Lake-S vPro desktop processors, which are likely to be similar to the consumer Alder Lake-S series, will have up to 16 cores.

Intel’s Alder Lake-P mobile processor series will include models with up to 14 cores. This is likely to mean configurations with up to six high-performance cores and up to eight energy-efficient cores. As a reminder, the Alder Lake-P series includes the U15, U28 and H45 series. The higher-end Alder Lake-S mobile series, codenamed H55, will include models with eight cores of each type, but they don’t appear to be part of Intel’s vPro lineup.

Another graph shows that Alder Lake processors will be supported in Windows 10 until at least 2023.

Accusing the developers of the game War Thunder of inaccuracies, one of the players published a secret document on the network