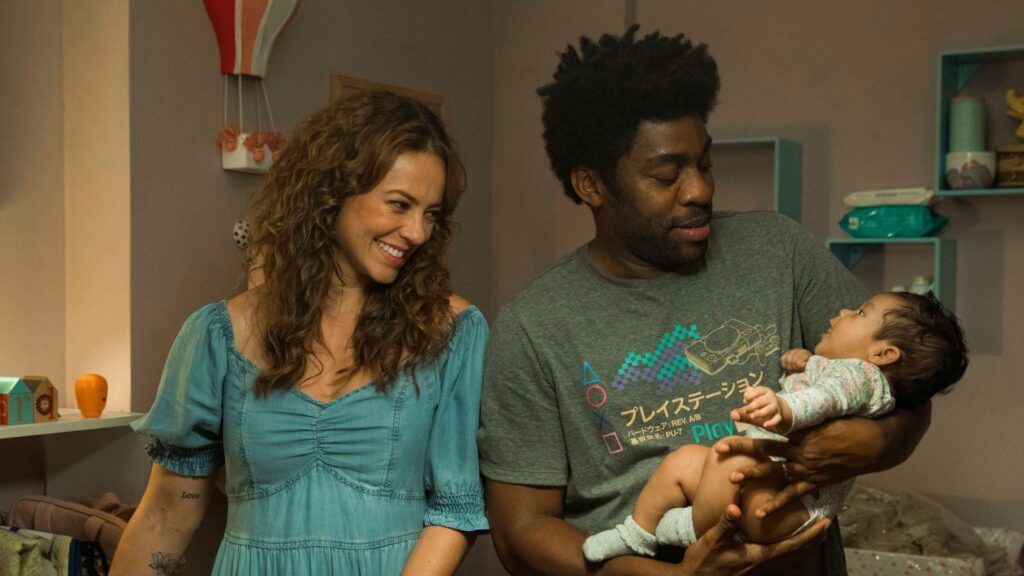 When he became a father, the actor Lázaro Ramos felt a bit alone.

“I wanted to talk about fatherhood and I didn’t find an echo among my friends”, he says. “We even created a WhatsApp group to talk about it, but then the conversation turned into something else: football, work, etc.”

In an interview with CNN the actor comments that it was through acting that he found space for the discussion about being a father.

With the invitation of the director Caito Ortiz Lázaro became the protagonist of the adaptation of the book “Dad is Pop” written by Marcos Piangers .

“When we started the film, I imagined it would be the story of a father with his daughters, half sugar water”, says Marcos, who participated in the film adaptation. “But here comes the director, the screenwriter, Lázaro and each one gives a little bit of his paternity”.

With Paola Oliveira , Elisa Lucinda and Leandro Ramos also in the cast, “Dad is Pop” tells the story of Tom, a first-time father who doesn’t know how to deal with the birth of his daughter.

He sees Elisa (Paola Oliveira), a very demanding mother and wife, who doesn’t look favorably on him playing soccer while she goes through the puerperium, for example.

Helping the couple is Tom’s mother Gladys (Elisa Lucinda) who, as a single mother, tries to show him what it takes to be a good father.

Humor is the high point of the film and permeates important discussions within the film, which can be very harsh outside the cinema: parental abandonment, marital crises and adoption.

For Lázaro Ramos, however controversial the situation may be, humor is the Brazilian way of seeing the world.
“I really believe in this kind of comedy. The one that will trip you up and take you to the kind of emotion you didn’t know you would get from watching a movie like this,” says the actor.

In the story, Tom gradually comes to understand that fatherhood is much more complex than social media shows. When talking to an equally neglectful friend, he calls him a “selfie dad”, saying he’s only a dad to show his Instagram followers.

Director Caíto Ortiz shows that the film was built in a very organic way, with the contribution of all the men and women who participated in the production.

“It is a story of a family. We did this hero arc on top of the conventions that the book presented,” he says. “And the fact that we have a black man and a white woman also says a little that we are talking about the formation of the Brazilian family.”

The lead screenwriter was Ricardo Hofstetter, but, according to Caíto, screenwriter Marina Oliveira was called in to give the final touches.

“There are many subjects covered in the film, but none of them works as the central theme of ‘Daddy is Pop’. Even so, Marina wrote some nudges, improved the female characters, and put in a little more social criticism.”

Social criticism that, again, is always accompanied by comedy. As he rushes to the hospital, Lázaro Ramos’ character tries to get a taxi, fails at first, and asks God that no one sees him as a black man, at least at that moment.

As imagined, there are many scenes with child actors in the film and, consequently, a lot of improvisation.

“We lit up the house, the scenery, so that the children could be free”, says director Caíto Ortiz. “Then they managed to run a lot, and Lázaro and Paola followed behind, playing, and the children returned their reactions and improvised with the performances”.

Babies and children therefore drove the older actors, just like a child in real life. In view of this, the entire team relived many moments of their own fatherhood during the production of the feature.

“There is a lot of all the men who participated in this film”, says author Marcos Piangers. “Especially living in a country that doesn’t encourage parenting, that says you don’t need to take care, that takes paternity leave that’s too short, that doesn’t have a changing table in the men’s bathroom.”

Such difficulties are addressed explicitly in the film, however, for Lázaro, “Daddy is Pop” is, above all, a film about family relationships.

“We talk about the experience of fatherhood, motherhood, but also about the partnership that the two need to have to create full human beings.”

The actor believes that the discussion around these themes will not end once the lights in the movie theater are turned on.

“I’m sure the families will leave, go home and talk, perhaps, in a lighter way about very tense subjects.”

The movie “Daddy is Pop” hits theaters this Thursday (11).