Significant upheavals in the political scene, records the new poll of the company Metron Analysis that was presented in the main news bulletin of Mega.

The investigation took place between May 17 and 23 and took into account both the Prime Minister’s trip to the USA and the new tension in Greek-Turkish, as well as the developments with the monkey pox.

The data and the qualitative characteristics show a strengthening of the ruling party and a stable situation of SYRIZA, which, however, can not close the gap significantly, despite the fact that it insists on calling for elections.

The following results are obtained in the intention to vote and in the question “what would you vote for if we had parliamentary elections next Sunday”:

New Democracy receives a percentage of 28.5%, rising 1.5 points compared to the April measurement. Apparently the government is capitalizing on the good image of the prime minister in the USA but also gathering more people on the occasion of the challenges of Turkey.

SYRIZA follows with a percentage of 20.3%, with an increase of only 0.5 points (from 19.8% in April). The difference between the two parties rises to 8.2 points, from 7.2 points in April. This means that the official opposition can not capitalize on any damage that the ND has after three years in governing the country. 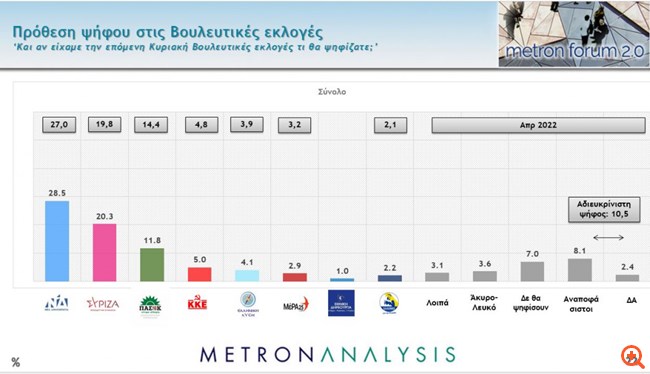 Of course, SYRIZA’s criticisms against the government on a number of issues do not find a positive response either.

Third party, but with significant losses comes PASOK which gets 11.8% from 14.4% in April, ie 2.6 points lower. Of course, the measurement did not capture the positive image that PASOK had after the conference that took place last weekend.

It is followed by the KKE with 5%, the Hellenic Solution with 4.1% and an increase of 0.2 points. Mr. Varoufakis’s MERA25 appears marginally outside Parliament with 2.9% from 3.2% in April.

The party Ethniki Dimiourgia of Tzimeros, Kranidiotis, Bogdanou is recorded at 1%, while the party “Greeks for the Homeland” of Ilias Kasidiaris (2.1 points) gets 2.2%.

It is noteworthy that the unspecified vote reaches 10.5%.

For PASOK the rally is at 73.7%. From ND the voters who go to PASOK are in a percentage of 6.6% while the problem of SYRIZA is bigger as a percentage of 10.4% is moving. 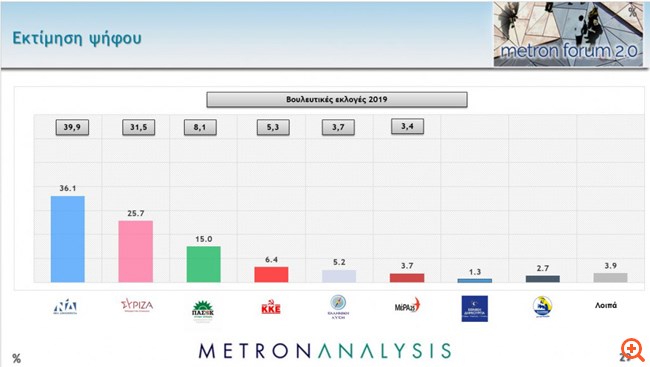 In the vote estimate, ie what the citizens think the parties will get, ND receives a percentage of 36.1%, from 39.9% in the 2019 elections. In other words, it has a significant loss of 3.8 points.

Note that the term vote rating refers to the estimation of party percentages without including the unspecified vote (ie excluding answers such as ‘I have not decided yet’, ‘I do not know’, ‘I do not answer’, ‘Cancel’, ‘White’ ).

To the question “regardless of what you would vote for, which party do you think will come first in the elections), 66% believe that ND will win.

18% SYRIZA, 6% PASOK – KINAL, another party 2%. As it seems from last February, the performance of victory in ND is more or less the same percentages, and slightly increased of SYRIZA (from 16% to 18%).

Regarding the electoral influence, the citizens say that they would vote for PASOK in any case at a rate of 52% and 47% would not vote.

Most suitable for prime minister

Among the political leaders, Kyriakos Mitsotakis gets a percentage of 34% in terms of eligibility for prime minister. It is followed by Alexis Tsipras with 16%, Nikos Androulakis with 6%, Giannis Varoufakis with 3%, Kyriakos Velopoulos, Dimitris Koutsoumbas with 2%. 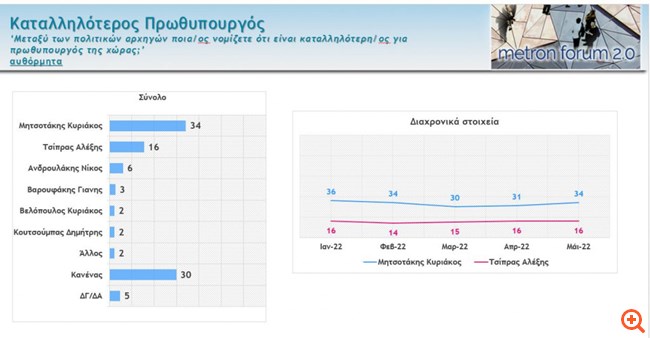 A secret division of Dyson creates robots for housework. These are not vacuum cleaners.

G. Oikonomou on Erdogan: He does not want stability, the dynamic return of Greece

Athens sees a quiet summer in the Aegean

Social networks can be tools to arouse interest in studies

Jul 2, 2022
The long-awaited holidays are approaching and there will be the desire to tell them using the social networks and…

ICMS reduction in 11 states, Braga Netto outside the…

ICMS reduction in 13 states, Braga Netto outside the…