Mid-term elections in the USA: Decisive showdown for Biden and Trump

A day before the mid-term elections, decisive for the rest of his term Joe Biden and about the political future of Donald Trump, the two American presidents, the current and the former, they will face each other today in competitive election rallies, in the final sprint of the campaign.

The two politicians, over seventy years old, are throwing all their weight into this electoral process, which will lay the foundations for the 2024 presidential elections.

Americans are called to the polls tomorrow Tuesday to renew all the seats in the US House of Representatives and a third of those in the Senate. A number of local elected officials, who decide their state’s policies on issues from abortion to the environment, are also at stake.

After a high-profile campaign focused on inflation, Republicans are increasingly confident of their chances of stripping the Democratic president of his majorities in both houses of Congress.

“If you want to end the destruction of our country and save the American dream then on Tuesday you have to vote Republican to create a huge wave” of red, this faction of the American right, said Donald Trump the weekend.

Two years before the presidential election, this election is generally characterized as a referendum on the current occupant of the White House. Generally, the president’s party rarely escapes the penalty vote in these contests. 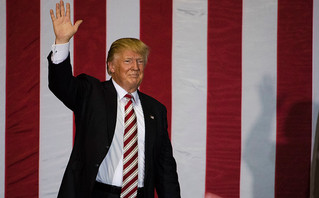 The Republican billionaire has thrown himself wholeheartedly into the campaign, fully aware of the fact that an eventual victory for his party’s candidates would provide him with the perfect springboard to announce his candidacy in the 2024 election.

Joe Biden has so far said he wants to run again, but the prospect doesn’t exactly appeal to all Democrats, both because of his age — he’ll soon be 80 — and his low popularity. The result of tomorrow’s elections is therefore crucial for his own political future.

The election will be decided in a handful of key states, more or less the same as those contested in the 2020 election.

All the spotlight is on Pennsylvania, a former steel stronghold, where Republican multimillionaire surgeon Mehmet Oz, who has been publicly endorsed by Donald Trump, will face off against Democratic former mayor John Fetterman for the most contested Senate seat.

This seat will probably decide the balance of power in the American upper house, a body with enormous power.

As in 2020, Georgia is also in the spotlight. Democrat Raphael Warnock, the first black senator ever elected by this state with a heavy slave and racist past, is seeking re-election against Herschel Walker, an African-American former athlete who was publicly endorsed by the former president.

Arizona, Nevada, Wisconsin and South Carolina will also be theaters of fierce battles, especially where Democrats are facing candidates endorsed by Donald Trump and pledging total loyalty to the former occupant of the White House.

In total, nearly $17 billion is estimated to be spent on these midterm elections, according to an analysis by the website OpenSecrets, an unprecedented amount.